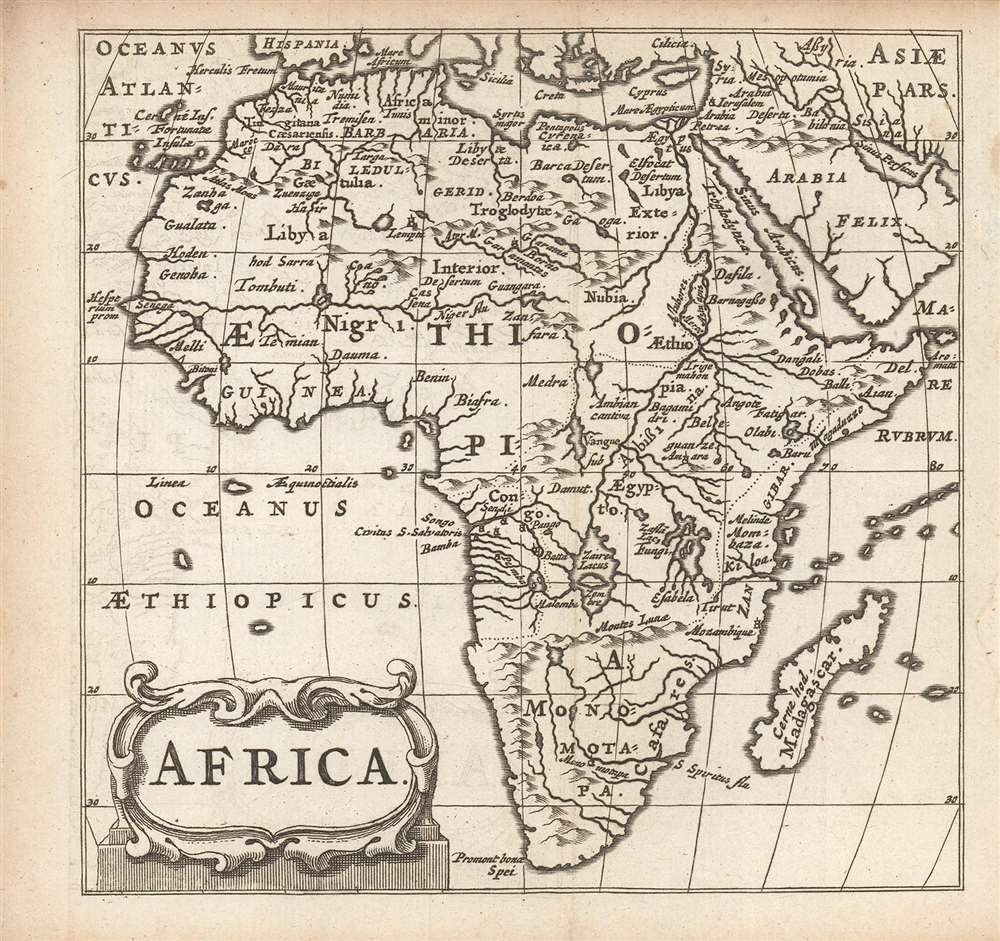 This is a finely-engraved miniature map of Africa, printed in a 1661 Elzevir edition of Philipp Cluver's introduction to geography. Cluver's work appeared in editions produced by many different houses, and with maps of wildly differing characteristics.

The map, geographically, closely resembles the Africa map appearing in the 1641 Conrad Buno edition of Cluver; both appear to follow the model of Blaeu's 1617 atlas map of the continent, and while not identical, the placenames on both maps match closely. The present map improves on its predecessor - first, in including placenames lacking on the earlier map, and second, in markedly improving the legibility of the map and its lettering. Throughout, the map is more expertly engraved with an even, light hand; even the cartouche of this example is more elegantly and artistically rendered than the clumsy, blockish cartouche of the 1641 Buno.

None of the maps appearing in the Elzevir edition of Cluver's Introductionis in universam geographiam are signed by an engraver. For a miniature map, this is not unusual - very often this work was executed by journeyman engravers, who would not have the right to apply their imprint to the work. However, it is very possible that the matriarch of the Elzevir firm - Eva van Alphen - did this work herself. She is known to have been an accomplished engraver, having been credited with a beautiful Dutch Bible map after Visscher (Orbis Terrarum Tabula Recens Emendata et in Lucem Edita per N. Visscher). At the time that their edition of Cluver was produced, Eva's husband Jean was in failing health and upon his 1661 death she took over the direction of the firm. The excellent work here may well be hers.

The map was engraved for inclusion in Philipp Cluver's Introductionis in universam geographiam, as early as 1659. Though he did not live to see it in print, Cluver's text would be one of the most popular of the seventeenth century, which was printed in many editions starting in 1624 but continuing well into the 18th century. This example appeared in a 1661 edition of the book, published by the house of Elzevir.