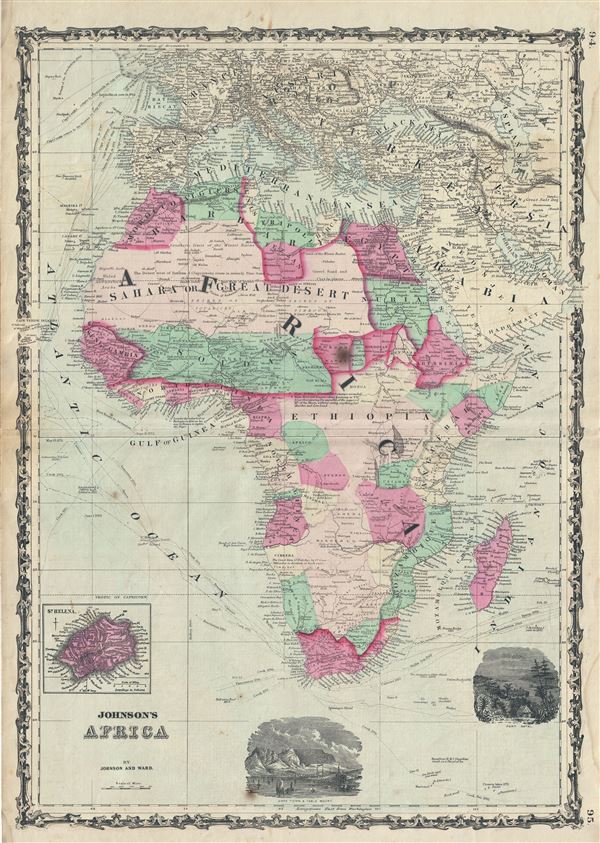 An extraordinary and attractive example of Johnson's 1863 map of Africa. This rare map appeared only in the earliest editions of Johnson's Atlas. Includes all of Africa as well as adjacent parts of Europe and Asia. This exceptional map was designed during the great age of African exploration in the mid-19th century. Lake Victoria (alternately called Lake Nyanza or Ukerewe Sea) is shown in an embryonic state. Marks the route of Dr. Livingstone along the Zambezi River. Also offers notations regarding several other important explorations such as that of Mahamet Ali, Denham & Clapperton, Barth, Lander, and others. Includes many interesting comments and notes such as this one

In 1841.2 W. Arnaud & Sabatier ascended White River 500 leagues above Kartoum, passing the parallel of the supposed Mts. of the Moon without seeing anything but Marshes and Low Land.

Very good. Minor wear and verso repair along original centerfold. Text on verso. Some spotting here and there.