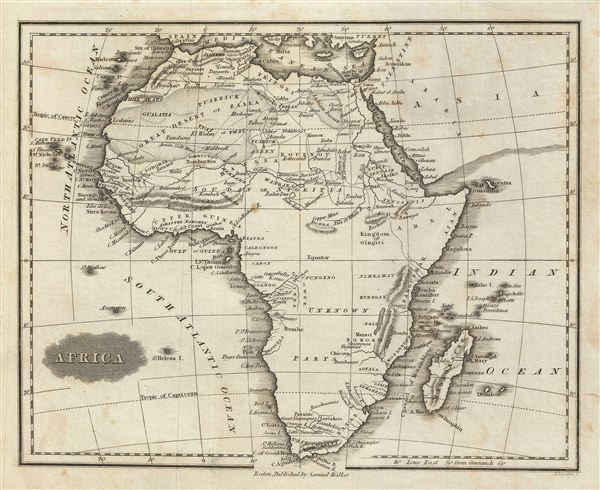 This is an attractive example of the 1828 Malte-Brun map of Africa. The map covers the entire continent from the tip of Spain to Cape Colony, including Madagascar. This uncommon map predates the explosion of African exploration that occurred in the mid 19h century. Much of the interior remains unknown. A large portion of central Africa is marked ‘Unknown Parts' and the area of the Sahara (here named Zaara) or the Great Desert is beautifully rendered. Lake Nyassa appears embryonically. The apocryphal Mountains of Kong, a speculative source of the Niger and a legacy of Mungo Park's explorations, are depicted. Several routes are marked along the northern part of the continent following the 'Return of Mr. Brown, 1796.' Various, important rivers, islands, mountains, cities and other topographical details are noted. This map was published by Samuel Walker in 1828 as part of the American edition of Conrad Malte-Brun's System of Geography, Vol. I.