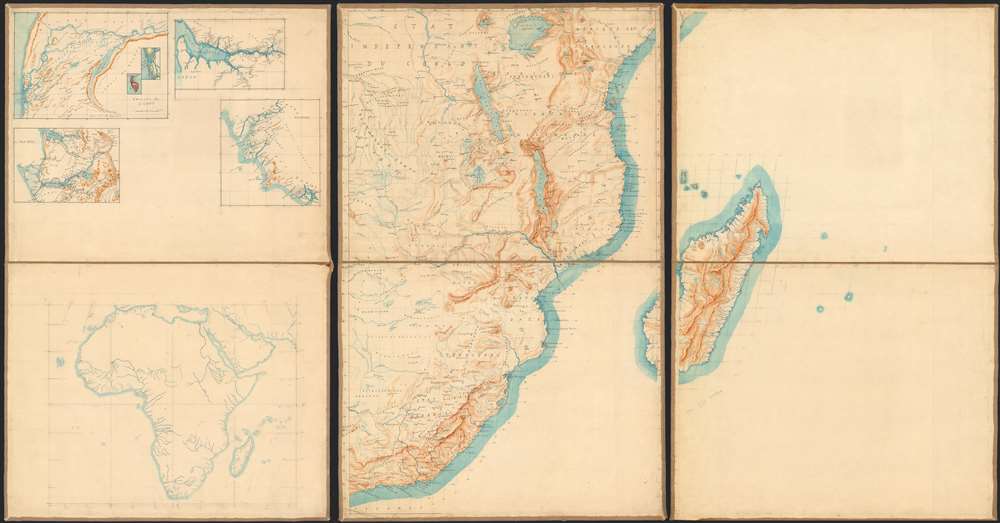 A remarkable c. 1885 French manuscript, drafted on six sheets, mounted on linen, in the same hand. The maps have been executed in pencil, then meticulously inked and colored with a high degree of professionalism and skill. Taken together, these maps represent a unique window to French colonial ambitions in Africa at the time of the Berlin Conference.

Together on the upper sheet of this pair are four finely-detailed maps of areas that were central to French colonial efforts in Western Africa in the late 19th century. Each is executed with a high degree of precision. Water areas are shown with blue wash color; topography is shown in brown ink and neat hachure. Settlements are marked in red.

This map shows the explored portion of what is now northern Senegal, and what was during the mid 19th century the northern frontier of French West Africa. The Senegal River represented the border between French territory and the Emirate of Trarza, with whom France fought two wars between 1825 and 1850. The area south of the Senegal River and west of the Lac de Guiers is mapped with detail, particularly in the area of Saint Louis, which was one of the most important French settlements in West Africa. This area fell under the administration of Richard Toll, a French settlement on the Senegal. The area beyond Lac de Guiers shows no detail apart from hills beyond the water's edge. To the north of the Senegal are the lands of the Maures and the Trarza; several rivers there are shown, but in dotted lines to indicate uncertainty about their courses. had An inset focuses more closely on the archipelago at the mouth of the Senegal, on one of whose islands Saint Louis was situated. The level of detail shown here encourages us that the date of the map cannot be later than 1885, the year which the Dakar-Saint Louis Railway began operation. This was the first railway of French West Africa, and it is unlikely that it would have been passed over if it were in existence at the time that this map was produced.

There is an additional inset of the island of Goree, a Senegalese island now part of the city of Dakar. Uninhabited prior to its settlement by the Portuguese, it was taken by the Dutch in the 16th century but had passed to the English in 1664 and the French in 1677. The island’s primary role was as a slave trading post.

In addition to the West African colony in Senegal, the French had established a foothold further to the south on the coast of Gabon. Two of the area maps focus on this region. One shows the Gabon Estuary and the Utamboni River: many settlements are detailed, including Gabon's capital of Libreville. The broader of the two Gabon maps shows the region surrounding the Ogooué River, which was under active exploration by the French in the 1870s. The map shows the tracks of the trade routes between the Gabon estuary and the Ogooué, which were not well understood by Europeans until the 1870s. The detail of the map is granular in terms of Tribal names, of which there are more than a dozen.

The fourth detail map focuses on the coast of Guinea, from the Rio Nunez to the Pongo River. Between 1882 and 1891, this region was known as Rivières du Sud by the French, and the absence of this terminology suggests an earlier date. It was an area contested between the French, Germany and Great Britain: The Rio Pongo area, nominally held by Germany, was traded to France for their claims on the Togolese coast, and the British formally recognised French control of the area in 1882. Here again, the coast shows sharp and convincing detail: the interior, however, is marked as Regions inexplorées. It would remain so until the 1890s, largely due to the successful resistance of the Imamate of Futa Jallon.

Key to an Unknown Wall Map

The second sheet is dedicated to a neatly drafted and colored outline map of the continent of Africa. The map includes no toponymy. Beyond coastlines, its detail is relegated to rivers. The most tantalizing aspect of this skeleton map is that it has been divided into pages. While not every section bears a number, those that do suggest that the complete map would have consisted of a total of sixteen sheets; it appears likely that the small, regional maps of the upper sheet were intended to be included as insets.

Of the sixteen sheets the anonymous author intended to produce, we are aware of only these four to have survived. These cover from Lake Victoria to South Africa's St. Sebastian Bay, and from the Congo to Madagascar. The detail throughout is extraordinary, illustrating known and speculative courses of rivers, roads, tribal villages, topography, and more.

Although undated, the map's details provide us some clues. The map's identification of the Congo Free State (État Indépendant du Congo) suggest the map may have been drawn between 1885 to 1908. The presence of British East Africa (Kenya) suits a similar range. The cartographic style, paper, and linen backing are consistent with this period. The abundant detail of the inset maps, reflecting a remarkably deep knowledge of the exploration of their respective regions for the 1880s, make the absence of any trace of the Dakar-St. Louis railway a compelling sign that the map could not have been drawn any later than 1885, thus making it contemporary to the Berlin Conference and the systematic European division of Africa into spheres of influence.

The map is an artifact of the 'Scramble for Africa,' the series of late 19th and early 20th century occupations, usurpations, annexations, divisions, and land seizures by European powers in Africa, here specifically France. Though the Scramble for Africa was mainly characterized by heightened occupation and direct ownership of colonial lands, the French here were engaged in a more traditional 'treaty based' colonization. The Scramble led to a number of new African states, many of which remain today, but few of which paid heed to traditional rivalries or cultural distinctions. The scramble culminated in the Berlin Conference of 1884, wherein European colonization of Africa was regulated and made official and the doctrine of Effective Occupation was introduced.

The cartographic style, paper, and linen backing suggest 19th century work, and its content leads us to tentatively date it to about 1885.  This may have originally been part of a larger manuscript map covering all of Africa, but no other pieces are known.