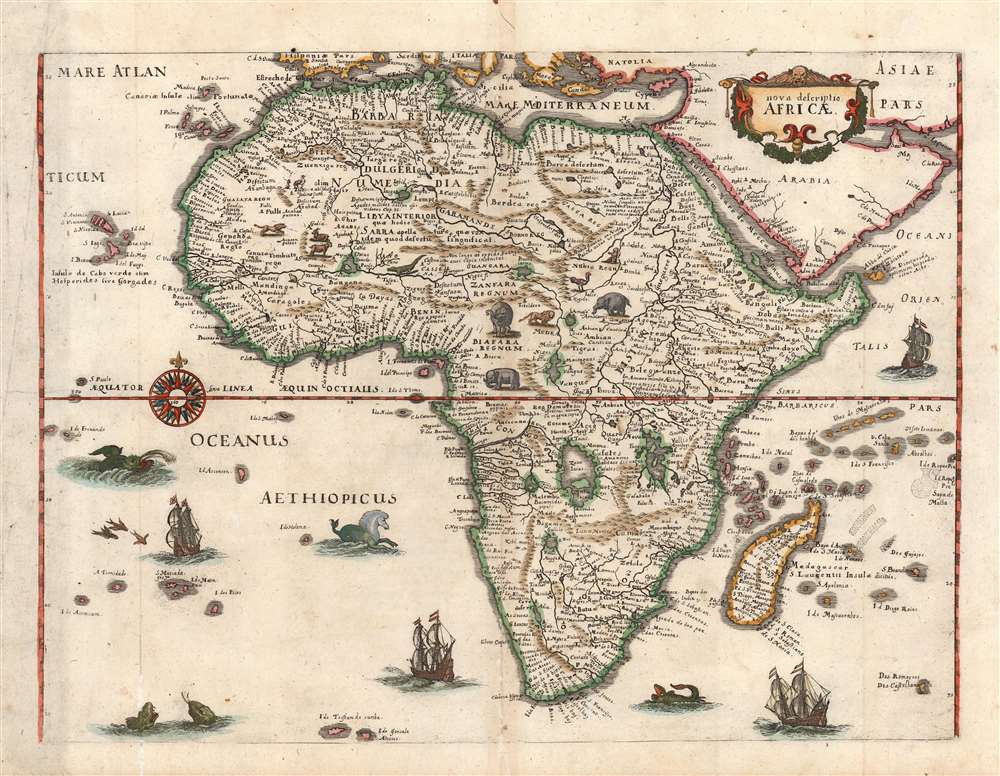 Richly decorative map of the Africa.

This is a scarce 1638 Matthias Merian map of Africa, built upon the geographic model of Willem Blaeu's 1617 'Africae nova descriptio'. Blaeu's details are presented here faithfully (though dispensing with Blaeu's decorative borders). This choice is consistent with Merian's decision to copy Blaeu's world and Americas maps for his 1638 Neuwe Archontologia cosmica. In addition to adopting Blaeu's cartography, Merian has filled the seas around Africa with ships and sea monsters; likewise the land teems with elephants, ostriches, lions, and other beasts.

In following Blaeu's atlas map, Merian in effect is reproducing Blaeu's 1608 wall map of the continent, which provided the standard for virtually all mapping of Africa until the late 17th century. The coastline, in particular, is rich in toponomy and the overall shape of the continent is remarkably accurate. Points within the continent, nonetheless, reveal the European ignorance of Africa's interior that would maintain until well into the 19th century. The Nile, for example, is illustrated with its sources in the lakes of Zaire and Zaflan, an assumption inherited from no less venerable an authority than the 2nd century Alexandrian Claudius Ptolemy. The equally fictitious Lake Sachaf, derived from Laurent Fries' 1522 geography, appears in southern Africa feeding the Zambere River, flowing to the Rio de Spirito Santo. The Cuama River is shown north of the Rio de Spirito Santo, but unlike earlier maps - including Blaeu's own wall map - the Cuama is given its own source, instead of sharing a source at Lake Sachaf. The Niger River is shown running, essentially, in the wrong direction: emptying into the Senegal river, after having flowed from an imagined Lake Niger in the general vicinity of what is now the Central African Republic. (The detailed mapping of the Niger River would not be complete until the 1890s.)

This map was executed in 1638 for inclusion in Matthias Merian's Neuwe Archontologia cosmica, a German translation of Pierre d'Avity's 1616 Les Estats, empires, et principautez du monde. We identify about ten examples of later editions of Merian's Neuwe Archontologia cosmica in institutional collections, and sixteen examples of this separate map are so cataloged.