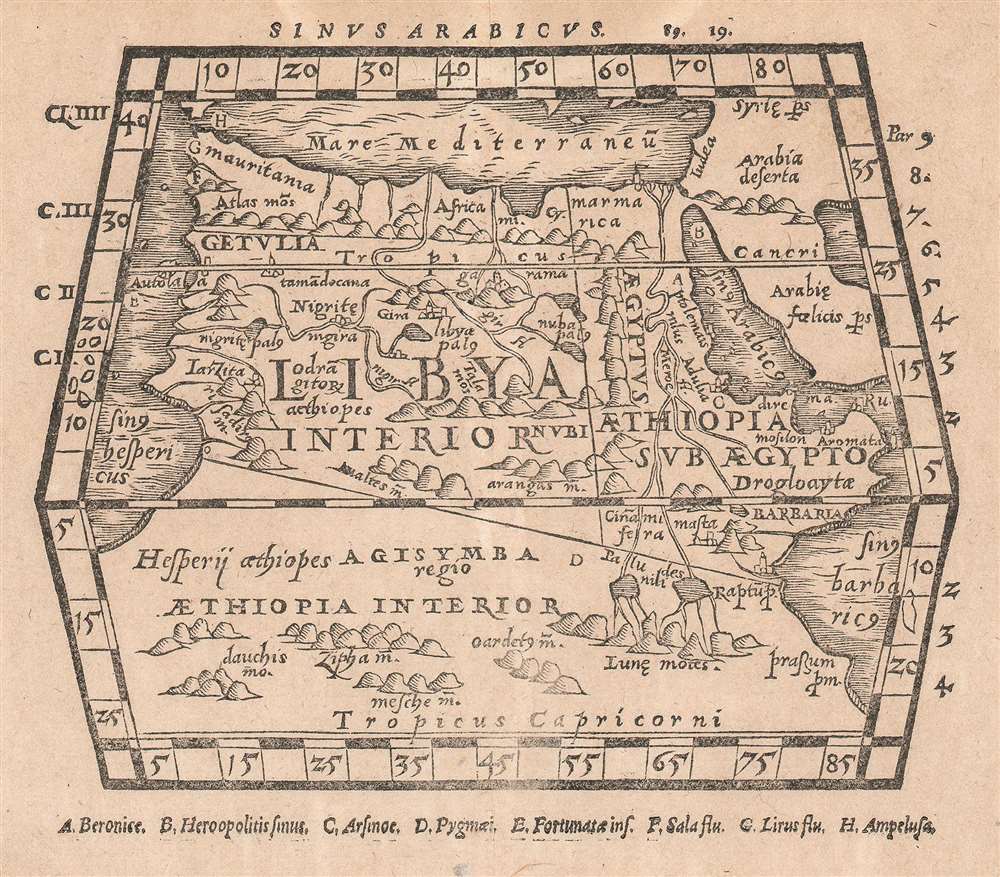 An attractively-executed map 16th-century woodcut map of Africa. The most general of the Ptolemaic maps of Africa, extending far enough south to fully show Ptolemy’s mythical source of the Nile River in the ‘Mountains of the Moon.’ The continent extends further still, expanding to east and west as it exits the map: Ptolemy’s conception of the world was that the Indian Ocean was an inland sea, and that Africa’s landmass continued to expand both eastward and westward to connect to China. As this 16th century woodcut was a historical work depicting 2nd century geographical knowledge, this error has been retained.

It was printed in 1576 by Heinrich Petri to illustrate his edition of Pomponius Mela’s De orbis situ, libri III and Iulius Solinus’ Polyhistor, two seminal . As neither Mela (first century CE) nor Solinus (third century CE) initially included maps in their works, Petri had to rely on another ancient source of maps for the book: Claudius Ptolemy (fl. 83-161 CE,) whose treatise on geography laid the foundation for all modern cartography, and whose work had already been reproduced in many editions in the 16th century, some published by Petri himself. Ptolemy’s general map of Africa would have been the natural choice for illustrating the situation of the Persian Gulf (the section heading at the top of the page, Sinus Arabicus, suggests that this was the purpose of the map in this context.)

Heinrich Petri (1508 - 1579) and his son Sebastian Henric Petri (1545 – 1627) were printers based in Basel, Switzerland. Heinrich was the son of the printer Adam Petri and Anna Selber. After Adam died in 1527, Anna married the humanist and geographer Sebastian Münster - one of Adam's collaborators. Sebastian contracted his stepson, Henricus Petri (Petrus), to print editions of his wildly popular Cosmographia. Later Petri, brought his son, Sebastian Henric Petri, into the family business. Their firm was known as the Officina Henricpetrina. In addition to the Cosmographia, they also published a number of other seminal works including the 1566 second edition of Nicolaus Copernicus's De Revolutionibus Orbium Coelestium and Georg Joachim Rheticus's Narratio. Learn More...

JCB 13178.
Looking for a high-resolution scan of this?