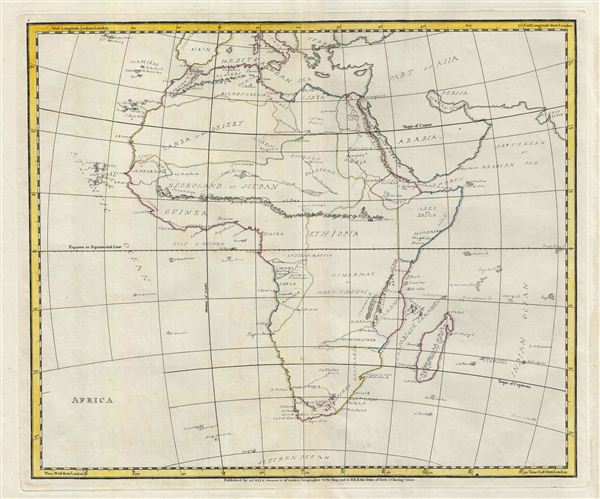 An unusual and beautiful semi-manuscript map of the Africa dating to 1823. The printed portions of this map follow the cartography of James Wyld and include the basic outlines of the countries, latitude and longitude lines, the Tropic of Capricorn, the equator, and the Meridian of London. The remainder of the map, including all textual labels and color work, had been completed in manuscript, that is to say, hand drawn. Wyld most likely produced this map intentionally without labels for use as a classroom workbook by which children could learn geography by filling in the blanks.

The manuscript geographical data and detail throughout is altogether outstanding. The work is completed in a fine hand adept at decorative text and the rendering of rivers and mountains. The geography follows the conventions of the period. Africa is transected by a large apocryphal mountain range identified as the Mountains of Kong in the west and the Mountains of the Moon in the east. Both ranges were speculated as possible sources for Africa's great river systems, the Niger and the Nile, respectively. Although the cartographer makes little attempt to map the interior in serious detail, reflecting the general lack of european knowledge of the region, some areas are represented more thoroughly than others. These include the Senegambia, egypt Nubia and Abyssinia, the Congo, South Africa, and the Lands of Monomotapa and Mozambique. Lake Malawi is illustrated in an embryonic but largely accurate form. Throughout various tribal nations are noted.