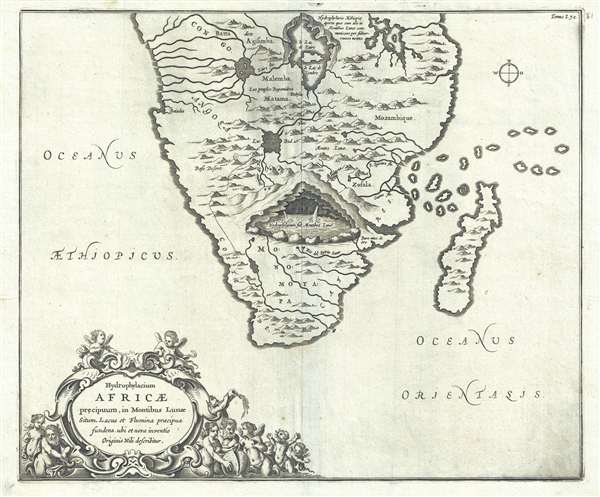 One of the first scientific-thematic maps of Africa - here illustrating the hydro-geographic theories of Athanasius Kircher.
$1,000.00

A fine example of Athanasius Kircher's 1665 map of southern Africa. The map covers Africa roughly from the Congo south to the Cape of Good Hope, including the Island of Madagascar. Cartographically the map is primitive, even for its time, but Sofala (Zofala) is noted as are the two large lakes at the upper border of the map which represent Ptolemy's semi-apocryphal sources of the White Nile. This is one of several maps prepared by Kircher to illustrate his unique hydro-geographic theory. Kircher hypothesized that tides and currents are caused by water moving to and from a massive subterranean ocean. Kircher further postulated that water entered and exited the subterranean ocean via a number of great abysses situated around the globe. In addition, he believed that massive underground lakes lay beneath most of the world's great mountain ranges – one such lake is apparent here and the obvious centerpiece of the map. In Travels to Discover the Source of the Nile in the Years 1768-1773, the explorer James Bruce records Kircher's account of this submerged lake, as drawn from a contemporary traveler, the Jesuit priest Peter Paez,

On the 21st April in the year 1618, being there with the King and his army, I ascended the place and observed everything with great attention: I discovered first two round fountain each bout four palms in diameter, and saw with the greatest delight what neither Cyrus, the King of the Persians, or Cambysis, nor Alexander the Great, nor the famous Julius Caesar could ever discover. The two openings of these fountains have no issue in the plain on top of the mountain but flow from the root of it. The second fountain lies about a stone-cast west from the first: the inhabitants say that this whole mountain is full of water and add that the whole plain about the fountain is floating and unsteady, a certain mark that there is water concealed under it.

Of course, Paez was referring to the source of the Blue Nile, later discovered by Bruce in Ethiopia, far to the north of this map's coverage. Although Kircher's theories were revolutionary at the time, they seem simplistic, even ridiculous to us today. Nonetheless, Kircher's maps were among the first thematic maps to attempt to scientifically illustrate and explain global geological and oceanographic phenomena.

This map was issued to accompany the 1665 edition of Kircher's Mundus Subterranous.

OCLC 163838784. Norwich, O. I., Norwich's Maps of Africa: An Illustrated and Annotated Cartobibliography, no. 157.
Looking for a high-resolution scan of this?