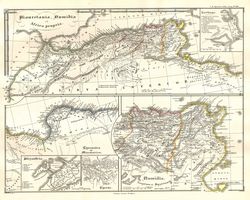 This hand colored map is a steel plate lithograph depicting the western part of North Africa in ancient times. This area contains the city of Carthage, leveled by Rome at the end of the third Punic war. Carthage's great general Hannibal, nearly conquered Rome with his highly trained war elephants, before being turned back at the very brink of victory. Includes insets city plans of Carthage, Tyrene, and Alexandria in Egypt. Today this region includes the nations of Tunisia, Morocco, and Algeria. It was published in 1855 by the legendary German cartographer Justus Perthes. Issued as part of the the 'Spruneri Atlas Antiquarie.'