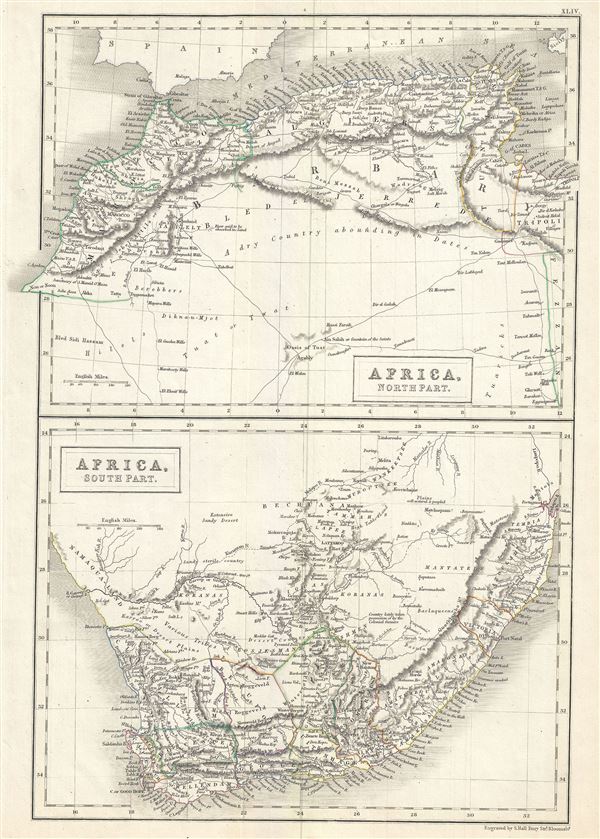 This is a fine example of Adam and Charles Black's 1851 map of Africa, northern and southern parts. Divided into two parts, the upper map is of the Barbary Coast and covers the western Mediterranean Coast of Africa from Morocco to Tripoli, including modern day Morocco, Algeria, Tunisia and Libya. The lower map covers modern day South Africa and includes the cities and towns of Clanwilliam, Beaufort, Worchester, Cape Town, George, Uitenhage, Stellenbosch, Somerset and Graaff-Reinet. Various cities, towns, oases, rivers, deserts, mountains and several other topographical details are marked with relief shown by hachure. The map of North Africa depicts the Tuat, a vast desert region, marked with numerous oases. The desert area is largely unmapped, simply identified as 'A dry Country abounding in Dates.' Parts of North Africa, at the time were under the influence of the rapidly declining Ottoman Empire. The region would go on to be colonized by France, United Kingdom, Spain and Italy during the next century. The map of South Africa depicts the regions of the various Bushmen (Bosjesmans) tribes. This map was engraved by Sidney Hall and issued as plate no. XLIV in the 1844 edition of Black's General Atlas.