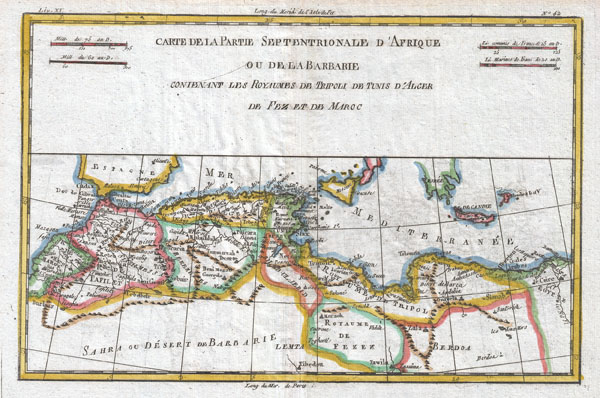 Home of the Barbary Pirates!

A fine example of Rigobert Bonne and Guilleme Raynal's 1780 map of northwestern Africa or the Barbary Coast. Includes the modern day countries of Morocco, Algeria, Tunisia, Libya, and parts of adjacent Spain, Italy and Greece. This map was made in response to European interest in the region due to coastal attacks and incursions by the Barbary Pirates based in Algeria, Tunis, and Morocco. The Barbary Pirates disrupted trade in this region from the Crusades to the early 19th century. Features rivers, some topographical features, and political boundaries. Drawn by R. Bonne for G. Raynal's Atlas de Toutes les Parties Connues du Globe Terrestre, Dressé pour l'Histoire Philosophique et Politique des Établissemens et du Commerce des Européens dans les Deux Indes.