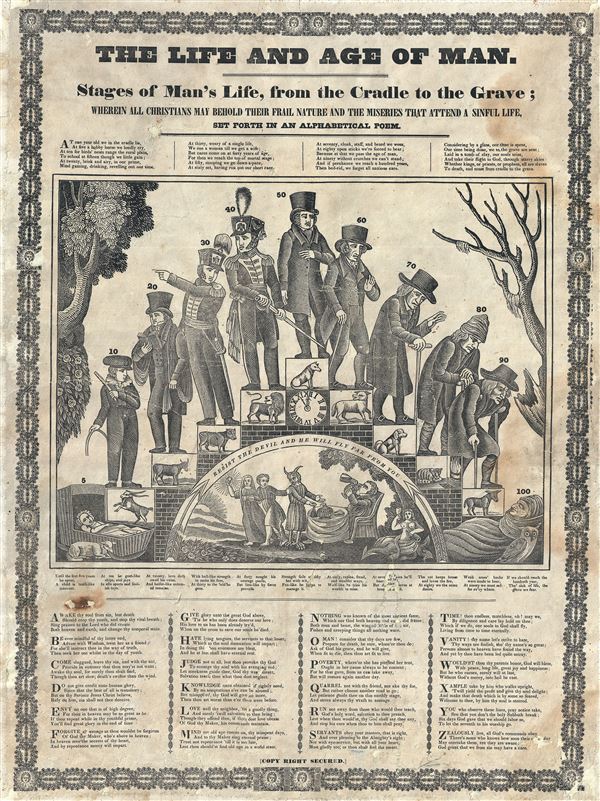 An uncommon c. 1835 moralistic broadside attributed to Albert Alden featuring an allegorical illustration of the stages of a man's life from 5 to 100. Standing astride a brick pyramid, this broadside lithographic engraving illustrates a man's life in 10 stages: 5, 10, 20, 30, 40, 50, 60, 0, 80, 90, and 100. Age 5 is somewhat misrepresented as infant stage, 50 is the apex of a man's life (compare this to the similar 'Life and Age of Woman,' offered separately, diagram by the same author in which the apex is 30), and 100 is the grave. Each stage of life is related to a totemic animal, for example:

Until the first five years be spent,
A child is lamb-like innocent.

Strength fails at fifty but with wit,
Fox-like he helps to manage it.

If we should reach this hundredth year,
Tho' sick of life, the grave we fear.

Below the engraving proper are a series of admonitions for leading a righteous and good life. The whole is surrounded by a decorative vine-motif border.

'Stages of Life' graphics date to the 16th century when the German artist Jorg Breu issued an engraving called the 'Ten Ages of Man.' That engraving, like this one, illustrated men of ascending ages on a pyramid like series of steps leading from birth to death. Our illustration includes a clock, representing the inevitable passage of time. Below the clock is an allegorical scene in which the Devil tempts two men. One, a glutton, succumbs to satanic temptation and drinks from two wine vessels at once. The second man resists the Devil and appears to be happy in his ascent to heaven.

Please compare with a similar diagram, the 'Age of Woman' that we are offering separately.

Albert Alden (1812 - 1883) was a Massachusetts based American printer and engraver. Alden learnt the art of engraving and typesetting with the Fulton County Republican of Johnstown, New York. He published the Barre Gazette in Barre, Massachusetts, and was presumable responsible for its many engravings. Cartographically speaking his corpus is limited but he did issue a very attractive pictorial wall map of the United States in 1845. Learn More...