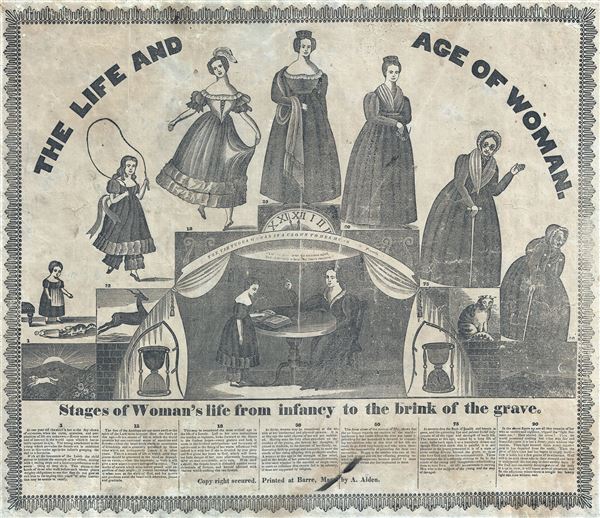 A allegorical illustration of the stages of a woman's life.
$800.00

An uncommon c. 1835 moralistic broadside attributed to Albert Alden featuring an allegorical illustration of the stages of a woman's life from 1 to 80. Standing astride a brick pyramid, this broadside engraving illustrates a woman's life in 7 stages: 1, 12, 18, 30, 50, 75, and 90. Age 1 is somewhat misrepresented as toddler stage, 30 is the apex of a man's life (compare this to the similar 'Life and Age of Man', offered separately, diagram by the same author in which the apex is 50), and 90 is the crone. Each stage of life is features a short poetic description, for example:

(12) The feet of the Antelope are not more swift or the spirit of the Lark more buoyant than the Girl's at this age.

(90) In the above figure we see all that remains of her who at twelve and eighteen,
tripped the 'light fantastic toe.' How altered the scene!

Below the engraving proper are a series of admonitions for leading a righteous and good life. The whole is surrounded by a decorative vine-motif border.

'Stages of Life' graphics date to the 16th century when the German artist Jorg Breu issued an engraving called the 'Ten Ages of Man'. That engraving, like this one, illustrated individuals of ascending ages on a pyramid like series of steps leading from birth to death. Our illustration includes a clock, and two hourglasses representing the inevitable passage of time. Below the clock is a scene in a young woman studies the Bible.

Please compare with a similar diagram, the 'Age of Man' that we are offering separately. The illustration highlights the subservient domestic role of women in early 19th century New England. Compared to the 'Age of Man', the woman's life is bleak with salvation existing only in service to husband, children, and god.

Albert Alden (1812 - 1883) was a Massachusetts based American printer and engraver. Alden learnt the art of engraving and typesetting with the Fulton County Republican of Johnstown, New York. He published the Barre Gazette in Barre, Massachusetts, and was presumable responsible for its many engravings. Cartographically speaking his corpus is limited but he did issue a very attractive pictorial wall map of the United States in 1845. Learn More...