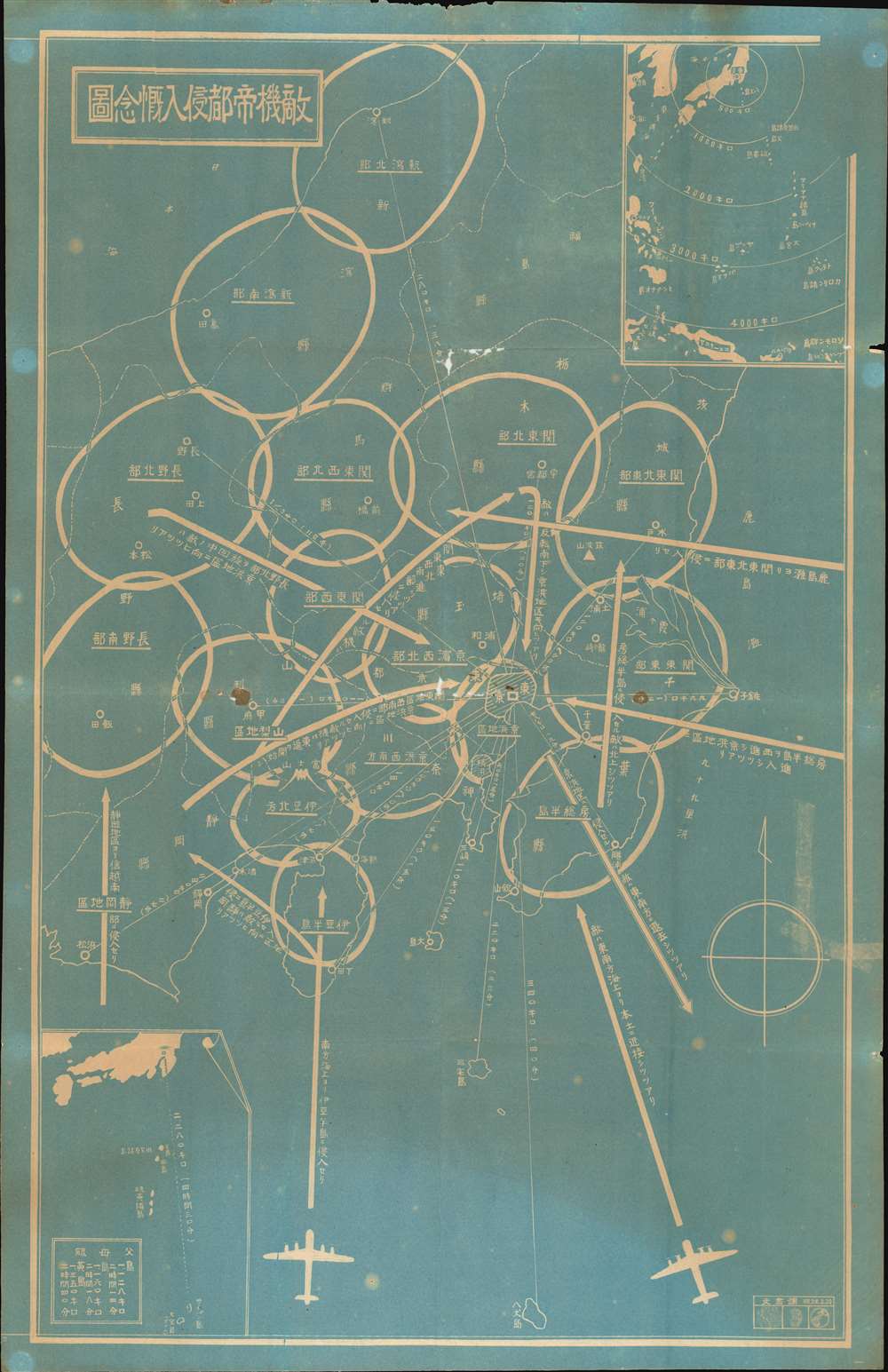 American aerial bombings of Japan and speculation about a land invasion of the Home Islands.
$2,500.00

This is the only surviving example of a top-secret Japanese cyanotype map of Honshu, Japan, detailing American strategic (and not so strategic) bombing raids against the Japanese and speculating on American plans for a forthcoming invasion. Silhouettes of two large airplanes (American B-29s) approach Japan from the south. These planes flew roundtrip from Saipan and Tinian, two islands in the Marianas. Dated February 20, 1945, less than a year after the Americans launched massive invasions to capture both islands and the day after the Americans launch their assault on Iwo Jima, the Japanese are clearly concerned about the U.S.'s progress closer and closer to their homeland. Several large arrows mark presumed invasion routes converging on Tokyo from four different directions. Insets in the upper right and lower left situate Japan geographically with relation to the Philippines and New Guinea and with the islands likely to pose invasion risks.

The Firebombing of Japan

While this map's publishers had every right to be concerned about American bombers flying over their country, in only a matter of weeks after this map was made their situation became inconceivably worse. In early March 1945, American commanders began firebombing Japanese cities with napalm, electing to begin their heinous campaign on the night of March 9, 1945. That night, more than 270 B-29s rained fire on the Japanese capital, dropping over 1,600 tons of bombs. The raid destroyed sixteen square miles of downtown Tokyo, killed an estimated 100,000 civilians, and left over one million people homeless. In mid-April, after a month of strategic bombings in support of the invasion of Okinawa, the firebombing campaign against Japan's other biggest cities commenced in earnest and continued through June. In those two months, the Army Air Force destroyed Japan's six largest cities, killed between 112,000 and 127,000 people, and left millions homeless. Incendiary raids against small Japanese cities began in mid-June and continued through the end of the war in August. These raids on small cities could effectively wipe them off the map.

The concern exhibited over a possible invasion was also warranted. Operation Downfall, the planned invasion of the Japanese Home Islands, had been in planning stages since at least 1943. Two separate landings, Olympic and Coronet, planned for November 1945 and March 1946 respectively, were meant to force the Japanese surrender. History, of course, tells us that these events did not happen, but were superseded by the atomic bombings of Hiroshima and Nagasaki in August 1945.

This map was created by an unknown maker, likely someone high in the command structure of the Japanese military, and published on February 20, 1945. As a cyanotype, we can safely assume that only a few were produced, likely less than 20, for circulation among the high command. This is the only known surviving example.