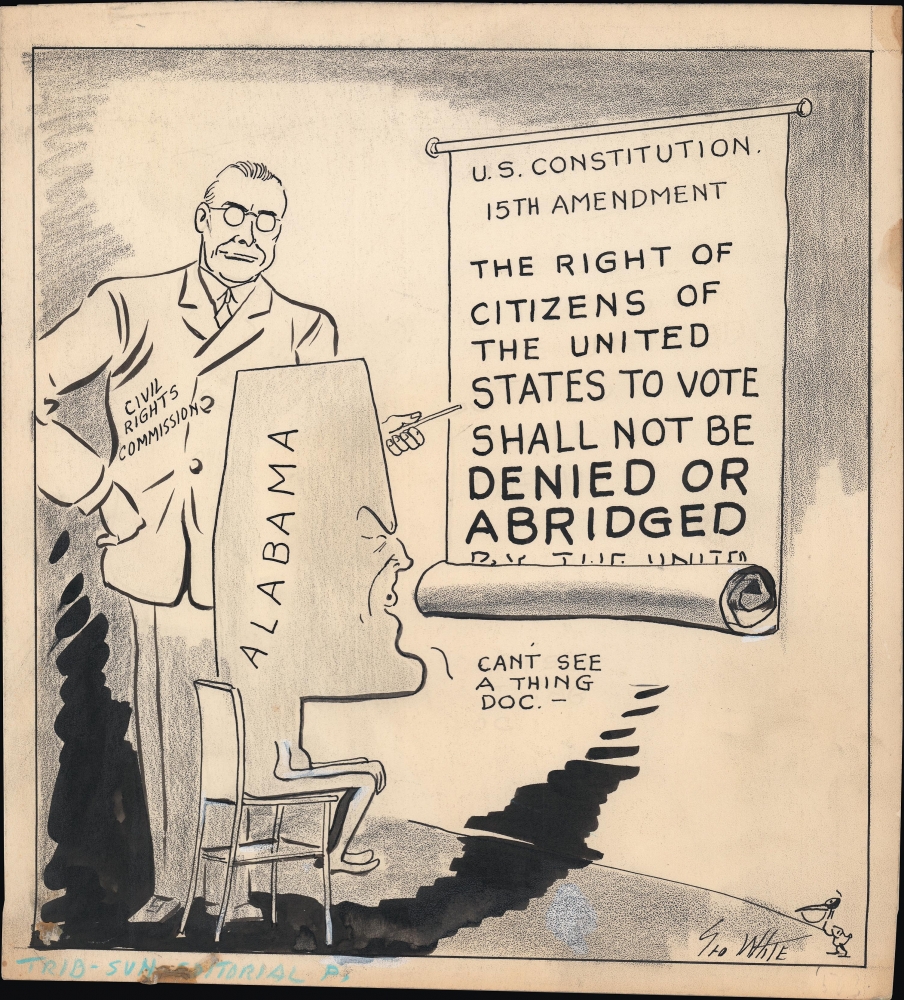 The struggle for voting rights in Alabama.
$650.00

A c. 1957 original manuscript draft political cartoon by George White for the Tampa Morning Tribune. It was produced in the context of the creation of the United States Commission on Civil Rights, which undertook investigations of voter rights violations in Alabama.

The cartoon depicts the state of Alabama as a patient at the optometrist, completely unable to read the text of the 15th Amendment to the U.S. Constitution, which was meant to remove racial barriers to voting in the wake of the Civil War and emancipation. At this time, Alabama was fiercely resisting attempts by the Commission on Civil Rights to scrutinize its efforts to disenfranchise black voters. The standing figure most likely represents John A. Hannah, the Chairman of the Commission on Civil Rights.

The United States Commission on Civil Rights was created by the Civil Rights Act of 1957, with a mandate to seek facts but with no explicit authority, prosecutorial or otherwise. The commission's first task was to explore claims of civil rights abuses in the registration of voters in Alabama, but in these efforts encountered the strident resistance of Circuit Court Judge (and later governor) George C. Wallace, among others. Wallace impounded county voting records and threatened to arrest any member of the commission that came to Alabama to try to retrieve the records. The fracas greatly elevated his public stature and preceded his first (unsuccessful) bid for the state's governorship in 1960.

Despite Wallace's threats, the commission went ahead with public hearings in Montgomery, Alabama, in December 1958, which included extensive testimony documenting cases of civil rights violations. Subsequent hearings were held and in September 1959 the Commission published its first report, nearly 700 pages long, primarily discussing voting rights abuses in the American South.

White's cartoon ridiculing white supremacy would have been controversial at the time, even for a newspaper based in relatively cosmopolitan Tampa.

This is the original manuscript draft of George White's cartoon for the Tampa Morning Tribune. It was published in 1958 or 1959, when the commission's investigations of voting rights in Alabama and the resistance of local segregationists were in the national spotlight.

George White (1901 - March 7, 1964) was born in Grand Rapids, Michigan and relocated to Tampa with this family in 1915. White studied art under Tampa artist Walter Collins and began work as a commercial artist at the Tampa Morning Tribune in 1928 and by 1934 was a regular cartoonist at the Tribune. Rather unconventionally, the paper featured his cartoons on the front page. His work displays the evolving course of America's domestic and geopolitics from the interwar period, through the Second World War, and into the Cold War Learn More...

Very good. Some areas of discoloration in the margins.