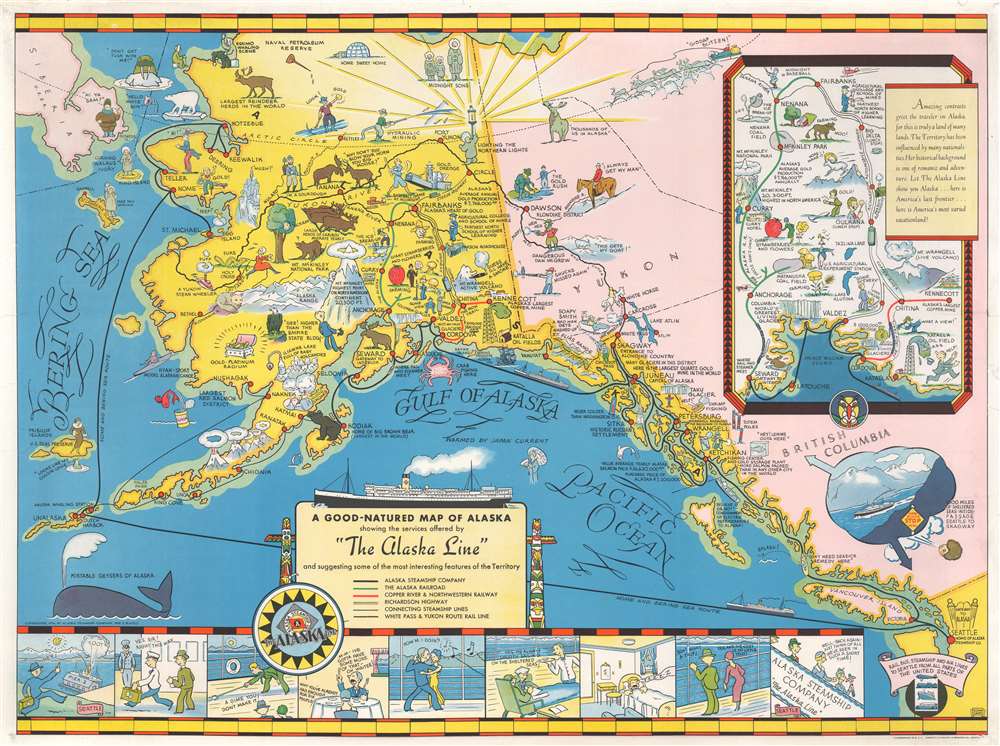 A delightful 1934 first edition pictorial map of Alaska drawn by Edward Camy to promote 'The Alaska Line. Prepared in the style of Jo Mora, Camy's map covers most of Alaska and parts of the Yukon and British Columbia as far south as Seattle. For a place that is shrouded in twilight for several months a year, this map is remarkably bright and sunny – no doubt an attempt by the Alaska Line to offset the image of Alaska as cold and dreary. Cartoonish vignette illustrations elaborate on Alaska's flora, fauna, culture, scenery, mineral wealth, and the activities that can be enjoyed there. The route of the steamship line along as it weaves around the Islands near Sitka on its way to Valdez and Kodiak is noted. Other routes go directly to Nome or island hop on the Aleutians. An inset map in the upper right offers the option to disembark in Cordova for an inland tour to Fairbanks, visiting Mount McKinley and Anchorage before re-embarking at Seward. A cartoon strip along the bottom of the map follows the adventures of two travelers as they dine, dance, sleep, and play their way up the coast. A whale in the lower left is advertised as a 'portable geyser'.

This map first appeared in 1934 in the present edition. It was subsequently reissued several times with minor changes. An issue in 1939 features a slightly different color scheme, and a 1940 edition appears as a folding pamphlet with printing on both sides.

Edward Camy (1904 – 1958) was a California based illustrator and graphic artist active in the first half of the 20th century. Camy did extensive work for the Alaska Steamship Line and the Santa Fe Railroad. He also produced graphic advertisements for Dole Pineapple and Signal Gasoline. He cartographic work is limited to only a few mops, most in the cartoonish style of his most famous work, A Good-Natured Map of Alaska. Camy was born in Fresno, California and lived most of his life in San Francisco. Learn More...