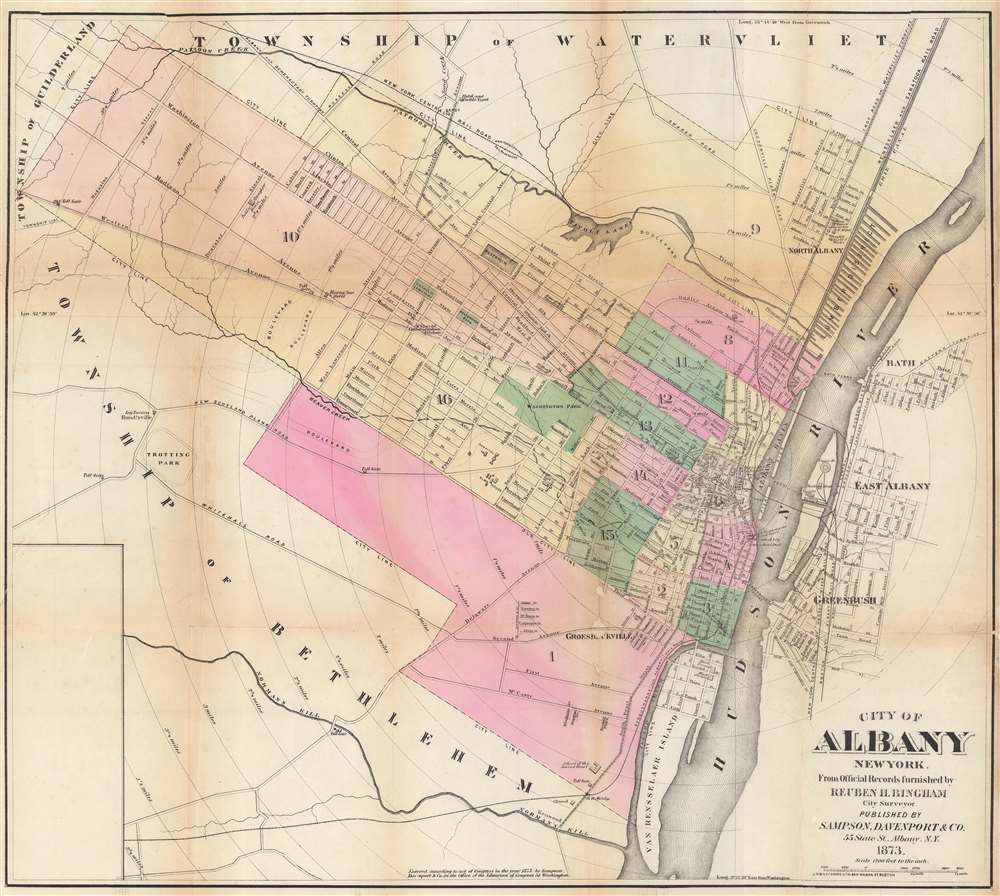 This is an 1873 Sampson, Davenport, and Company city plan or map of Albany, New York.

In the second half of the 19th century, Albany became a major transportation hub. Four major railroad lines converged in Albany: The New York Central Railroad, the Susquehanna and Albany Railroad, the Boston and Albany Railroad, and the Rensselaer and Saratoga Railroad. Additionally, the Erie Canal's eastern terminus was in Albany, with vessels exiting into the Hudson River, and providing the city with unfettered access to western New York's rich raw materials. During the same period, these factored led to Albany's development as a major industrial and milling center. The city was home to the nation's largest lumber market (labeled here along the Hudson River as 'lumber district'), the second most largest publishing industry in the United States, major iron foundries, and numerous banks. Several buildings are illustrated and labeled, including the 'New Capitol', City Happ, and the Penitentiary. Streets are labeled throughout, and concentric circles marking half-mile intervals emanate from the center of town.

This map was published by 'Sampson, Davenport and Company' 'from official records furnished by Reuben H. Bingham' and printed by J.H. Bufford in 1873. Four examples are cataloged in OCLC: New York Public Library, the Library of Congress, the State Library of Massachusetts, and the Wisconsin Historical Society.

George Sampson (fl. c. 1858 - c. 1930) was a Boston based publisher and printer active in the second half of the 19th century. Sampson initially partnered with George Adams, acquiring a half-share in the Boston Directory or Boston Almanac, and subsequently publishing as Adams, Sampson, and Company. Adams shares were eventually acquired by O.H. Davenport in 1865, when the company named changed to Sampson and Davenport. Working with Davenport, Sampson, expanded the scope of the Boston Directory to incorporate other towns and regions, producing the Massachusetts Register, the New York State Business Directory, the New England Gazetteer, the Roxbury Directory, and the Providence Almanac, among others, as well as various individual maps and guides. Davenport's shares were acquired by A. Murdoch in 1884. As Sampson and Murdoch, the firm expanded again, producing a catalog of over 120 city directories by 1925. The business passed into the hands for R. L. Polk and Company around 1930 and continued to publish directories until about 1980. Learn More...

Good. Backed on archival tissue for stability. Some creasing and toning. Two small areas of infill.