1861 Humphreys and Abbot Map of the Mississippi River Alluvial Region 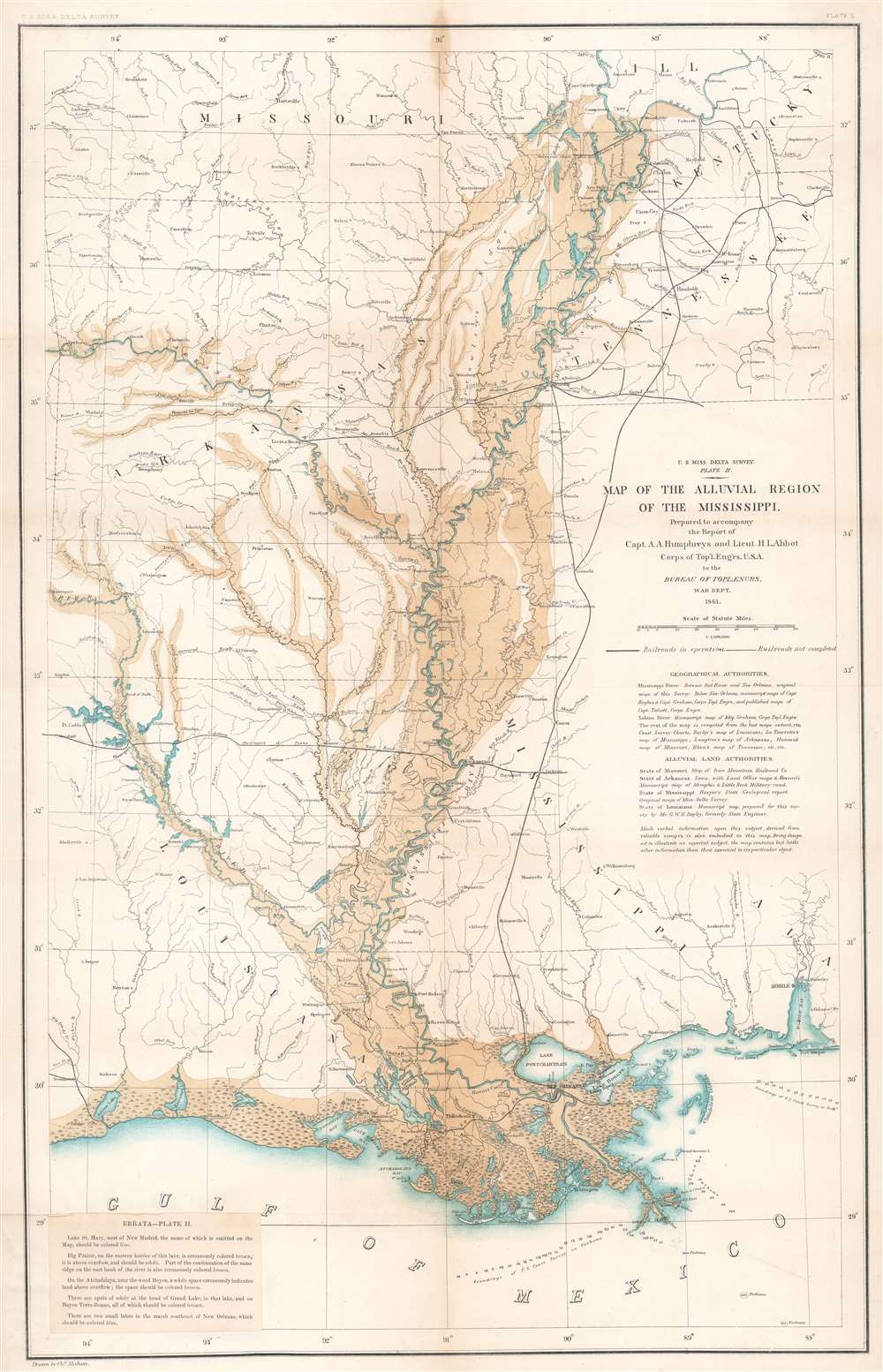 1861 Humphreys and Abbot Map of the Mississippi River Alluvial Region

Definitive moment of the American understanding of Rivers.

This is an 1861 Andrew A. Humphreys and Henry L. Abbot map of the Mississippi River alluvial region. Depicting from Jonesboro, Illinois, south to the Gulf of Mexico and from Fort Smith, Missouri, east to Clarksville, Tennessee, the region's river network is depicted in detail. Blue hand coloring highlights major rivers, including the Mississippi, Ohio, Arkansas, and Red Rivers, along with numerous lakes. Smaller rivers and creeks are marked by thin black lines. Overflow areas are shaded brown. Railways, such as the Memphis and Little Rock Railroad, the Shreveport and Texas Railroad, and the Cairo and Fulton Railroad, are illustrated and labeled.

The scientific conclusions of the Mississippi Delta survey gave it an importance in the history of hydraulic engineering out of proportion to the funds invested in it. In September 1850, responding to the pleas of southern congressmen seeking federal assistance to fight the periodic disastrous flooding that struck New Orleans and other lower Mississippi River communities, Congress appropriated $50,000 for a topographical and hydrographical survey of the Mississippi Delta, including a study of the best means of securing a 20-foot navigation channel at the Mississippi's mouth.

Topographical engineer Captain Andrew A. Humphreys initiated the survey and maintained overall supervision of the project, but beginning in 1857 he received the assistance of a young engineer, Second Lieutenant Henry L. Abbot. Abbot's field work proved so indispensable that when the final report was published in 1861, Humphreys named Abbot as its coauthor. Officially called the Report Upon the Physics and Hydraulics of the Mississippi River, the survey is often simply referred to as the Humphreys Abbot Report.

The two Army engineers submitted a report full of new details about the lower Mississippi Basin. From just south of the junction of the Mississippi and Ohio rivers to where the Mississippi empties into the Gulf of Mexico, they obtained data on river flow, channel cross-sections, and general topographical and geological features. After examining some 15 different formulas and finding each lacking, they began to develop their own formula to measure the flow of water in rivers, one that subsequently also proved faulty. Most significantly, it failed to take into account the degree of roughness of the slopes of a river channel. Still, their work stimulated other hydraulic engineers, and further research led to important theoretical discoveries. The report obtained the respect of engineers around the world. The conclusions of Humphreys and Abbot decidedly influenced the development of river engineering and the evolution of the Corps of Engineers. The authors believed that 'levees only' could control flooding along the lower Mississippi. Neither costly reservoirs or cutoffs were needed. The Corps of Engineers accepted these conclusions for nearly 60 years, not just for the Lower Mississippi but for the other large rivers as well. The 'levees only' policy profoundly affected the manner in which the United States developed its water resources. Indeed, the influence of the Humphreys Abbot report extended past World War II, despite the fact that by then Congress had authorized hundreds of reservoir projects.

Andrew Atkinson Humphreys (November 2, 1810 - December 27, 1883) was a career U.S. Army officer. Born in Philadelphia, Pennsylvania, Humphreys came from an illustrious family. His grandfather is remembered as the 'Father of the American Navy', because he served as the chief naval constructor from 1794 - 1801, and designed the first U.S. warships, including the USS Constitution. Samuel Humphreys, Andrew's father, designed the USS Pennsylvania, the largest and most heavily armed ship at the time. Humphreys graduated from Nazareth Hall (modern day Moravian College and Theological Seminary), then entered the United States Military Academy at West Point. Humphreys graduated on July 1, 1831, was commissioned as a second lieutenant, and joined the Second Artillery Regiment. in South Carolina. In the summer of 1836, Humphreys and his regiment went to Florida to fight in the Seminole Wars. Disgusted by the the war's mismanagement, Humphreys resigned his commission on September 30, 1836, and became a civil engineer. Nearly two years later, on July 7, 1838, Humphreys rejoined the U.S. Army as a 1st lieutenant in the Corps of Topographical Engineers. Humphreys began an extensive survey of the Mississippi River Delta in 1850, a project that lasted ten years. He also worked on the Pacific Railroad Surveys from 1853 - 1857. During these years just before the American Civil War, Humphreys earned a glowing reputation as a scientist both nationally and abroad. Humphreys was promoted to major at the beginning of the American Civil War and became the Army of the Potomac's chief topographical engineer. During the war, Humphreys fought beside McClellan during the Peninsula Campaign, when he was prmoted to brigadier general, given command of a division, and saw combat at the Battle of Antietam, the Battle of Fredericksburg, and the battle of Chancellorsville. He was transferred to a different division just before the Battle of Gettysburg, where, because of poor command decisions by his immediate superior, his division was annihilated. Humphreys was promoted to major general after the Battle of Gettysburg and consented to becoming General Meade's chief of staff, a position he had been offered in the days before Gettysburg. He served in this position until November 1864, when he was given command of the II Corps during the Siege of Petersburg. He held this command until the end of the war and his corps played a part in the Appomattox Campaign. After the war, Humphreys became Chief of Engineers in 1866, a position he held until he retired on June 30, 1879. Learn More...


Henry Larcom Abbot (August 13, 1831 - October 1, 1927) was an engineer and career officer in the United States Army. Born in Every, Massachusetts, Abbott graduated second in his class at West Point in 1854. Commissioned as a brevet second lieutenant on July 1, 1854, Abbot had initially wanted to join the Artillery, but a friend convinced him that the Engineers was a better option. By 1855, Abbot had been assigned to Lieutenant Robert Williamson's Pacific Railroad Survey in California and Oregon. Abbot also participated in several studies of the Mississippi River, including a notable study of the river's flow from the confluence with the Ohio River south to the Gulf of Mexico. Abbot was assigned to Brigadier General Irvin McDowell's forces at the outbreak of the American Civil War and was wounded at the First Battle of Bull Run. later, he served as a topographical engineer with the Army of the Potomac during the Peninsula Campaign, where he earned a brevet promotion to major at the siege of Yorktown. After the Peninsula Campaign, Abbot was transferred to command a heavy artillery unit, though that appointment did not last long as he was soon sent to Washington, D.C. to command a brigade defending the capital. In May 1864, Abbot was sent to command the artillery during the siege of Petersburg, and by December he was placed in command of all siege artillery in the Army of the Potomac and the Army of the James. After the war, Abbot remained in the army and served with the Army Corps of Engineers. He was placed in command of an engineer batallion at Willet's Point, New York, where he founded the army's Engineer Engineer School of Application, the first of its kind in the United States. After retiring from the army in 1895, Abbot continued to work as a civil engineer and was even employed as a consultant on the lock system for the Panama Canal. Learn More...


Charles Mahon (February 26, 1824 - January 8, 1903) was an American cartographer and civil engineer. Mahon made maps for the United States government as early as the 1850s (when he first appears on a U.S. Census living in Washington D.C.) and remained on the payroll of the U.S. Coast and Geodetic Survey through the 1890s. He married Minna Sarah Legare in 1863, with whom he had five children. Learn More...

Humphreys, A. A. and H. L. Abbot, 'Report Upon the Physics and Hydraulics of the Mississippi River' (Philadelphia: Lippincott) 1861.