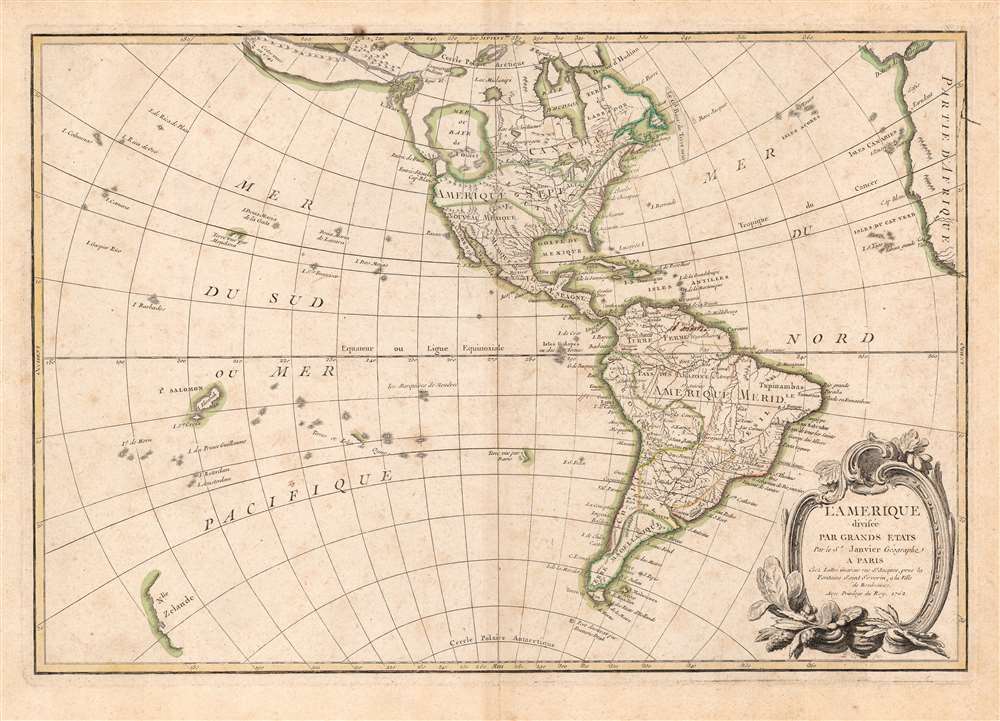 An altogether fascinating 1762 map of North America and South America by Jean Janvier. The map displays the entire continent from the Antarctic Circle to the Arctic Circle, extends westward to New Zealand, and eastward as far as Africa and Spain. This map, which is heavily influenced by the theoretical maps of Joseph Nicolas de l'Isle and Philippe Buache, went through several states of which this is the earliest and possibly the most interesting.

By far the most interesting aspects of this map deal with Janvier's treatment of the largely unexplored Pacific Northwest. A tremendous body of water, called the Sea of the West or in this case the 'Baye de L'Ouest,' occupies the greater part of the northwestern portion of the continent. This body of water, alternatively called the Sea of the West or Mer de l'Ouest, was speculated by Philippe Buache and Joseph Nicolas De l'Isle in the early 18th century based upon wishful thinking, the somewhat questionable 16th century explorations of Juan de Fuca, and the utterly fraudulent explorations of the imaginary Admiral De Fonte. Janvier gives the Mer de l'Ouest its fullest expression, though he stops just short of connecting it to either the network of lakes and rivers extending westward form the Hudson Bay or to the similar network extending westward from Lake Superior.

These river and lake networks were being actively explored through the early 18th century by a number of little known but important French explorers and Coureur des bois (Fur Trappers). Most specifically the explorations of Coureur des bois Pierre Gaultier de Varennes et de La Vérendrye with regard to the discovery of the Lake of the Woods (L. Des Bois) and Lake Winnipeg (L. Ouinipigon), both of which appear on this map.

Further north we can find traces of Admiral de Fonte's equally fictitious discovery of a passage from the Pacific (starting at the Archipel St. Lazare) eastward via a network of lakes and rivers to Baffin Bay. The De Fonte legend first appeared in a 1706 English publication entitled Memoirs of the Curious. This short-lived magazine published a previously unknown account by a supposed Spanish Admiral named Bartholomew de Fonte. De Fonte was said to have sailed up the Pacific coast of North America in 1640. On this voyage he apparently discovered a series of gigantic lakes, seas, and rivers heading eastward from the Pacific towards Hudson Bay. The De Fonte story relates how, on one of these great inland lakes, he met with a westward bound ship from Boston that could only have come through the Northwest Passage. Today, based upon inaccuracies and falsities, we know the entire De Fonte article to have been a fabrication. It nonethless set 18th century Europe afire with speculation that a Northwest Passage must indeed exist. Even such luminaries as Benjamin Franklin wrote long defenses of De Fonte. Our map offers an uncommon variant on the De Fonte passage, positioning its western entrada well to the north in order to accommodate the Sea of the West and situating its outlet at the Baffin rather than the Hudson Bay.

Even farther to the north we find a striking and exaggerated Alaska-like projection heading in the direction of Asia. This bears some resemblance to the Muller Peninsula postulated around this time based on sightings of the Aleutian archipelago and their misinterpretation as a single land mass. Even more so, given its directional orientation, it bears a significant resemblance to Gamaland or Companie Land as imagined by Sanson. A note at the very edge of this land mass claims that it was seen in 1741, suggesting either Vitus Bering or Alexei Chirikov. Both did in fact search for Gama or Companie land in this year without significant success.

New Zealand is revealed in an extremely embryonic form in the lower left quadrant. Only the western coast is mapped, in a rudimentary form based on Abel Tasman's reports of the mid 17th century. Maps revealing the two islands of New Zealand would not appear until after Cook's first circumnavigation (1768 - 1771).

Drawn by Jean Janvier in 1762 for issue as plate no. 31 in Jean Lattre's 1775 issue of the Atlas Moderne. We do not find this separate map in OCLC although it does appear on the market from time to time.