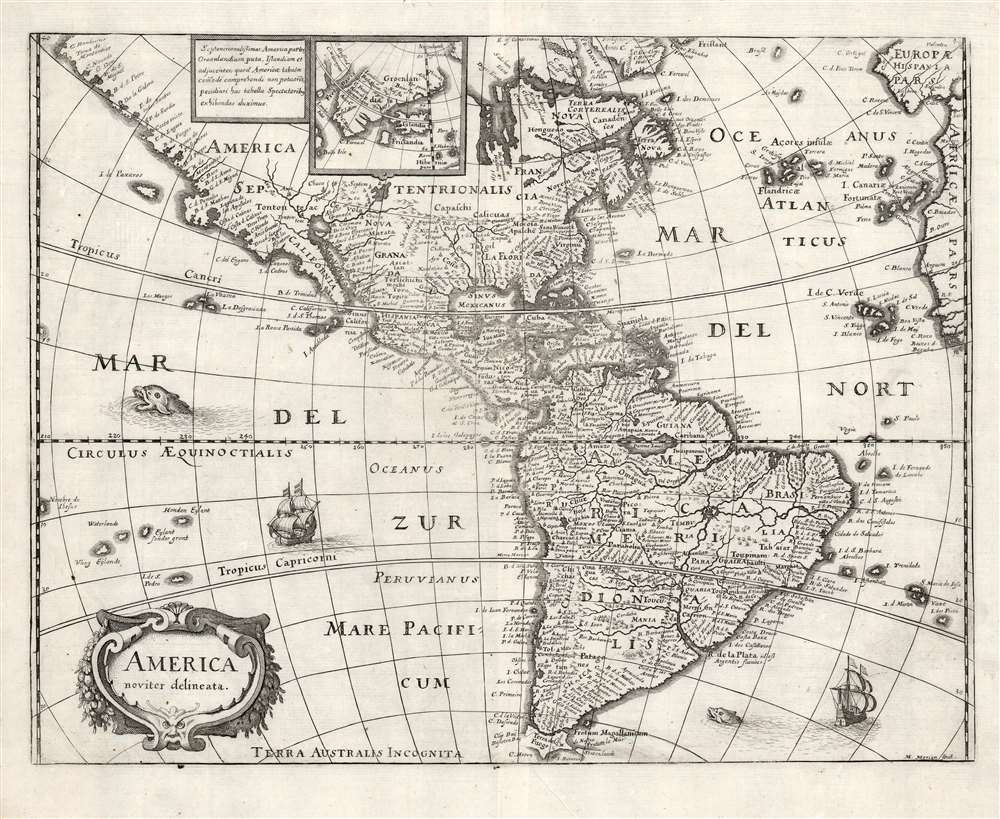 Elegantly-engraved map of the Western Hemisphere, showing the discoveries of Le Maire and Schouten.
$950.00

This is a scarce 1638 Matthais Merian map of the Americas. Merian had already, in 1631 produced a larger-format map of America, based on Jansson’s America noviter delineata of 1623. Merian's source for the present map was not, as Burden suggests, Jodocus Hondius Jr.'s 1618 map of the same title, but Blaeu's Americae Nova Tabula whose detail here is presented with a high degree of faithfulness (though dispensing with Blaeu's decorative borders). It is an interesting choice, but appears to be consistent with Merian's decision to copy Blaeu's world map in this volume.

Hondius’ 1618 map of the Americas bears many similarities to the Blaeu; one area of divergence is in the depiction of Tierra del Fuego. The first issue of Blaeu's map in 1617 was notable for its very primitive depiction of the island: Blaeu had been barred by the Dutch East India Company from including the discoveries of Le Maire and Schouten. When confronted with the reality that other mapmakers were not so unfairly circumscribed, the VOC relented and permitted Blaeu to amend his map in 1618. Blaeu's map lacks Hondius' Draex Eylanden, but includes the Pacific Islands reported by Le Maire and Schouten, which do not appear on the Hondius. In the Atlantic, Blaeu's map shows the I. Dos Picos at the Tropic of Capricorn. The presence of these islands on the Merian attests to a relationship to the Blaeu rather than the Hondius.

Norembega or Nurembega appears in what is today New England. This mysterious land began being mapped with Verrazano's 1529 manuscript chart of America. He used the term, Oranbega, which in Algonquin means something on the order of 'lull in the river'. The first detailed reference to Nurumbeg, or as it is more commonly spelled Norumbega, appeared in the 1542 journals of the French navigator Jean Fonteneau dit Alfonse de Saintonge, or Jean Allefonsce for short. Allefonsce was a well-respected navigator who, in conjunction with the French nobleman Jean-François de la Roque de Roberval's attempt to colonize the region, skirted the coast south of Newfoundland in 1542. He discovered and apparently sailed some distance up the Penobscot River, encountering a fur-rich American Indian city named Norumbega - somewhere near modern-day Bangor, Maine.

Although Roberval's colony lasted only two years, Andre Thevet, writing in 1550, records encountering a French trading fort at the site of Norumbega.

Merian here maps El Dorado (Manoa al Dorada) on the shores of a large lake in what today Northern Brazil or southern Guyana. Most Europeans believed that the most likely site of El Dorado legend was the mythical city of Manoa located here on the shores of the Lake Parima, near modern day Guyana, Venezuela, or northern Brazil. Manoa was first identified by Sir Walter Raleigh in 1595. Raleigh does not visit the city of Manoa (which he believes is El Dorado) himself due to the onset of the rainy season, however he describes the city, based on indigenous accounts, as resting on a salt lake over 200 leagues wide. This lake, though no longer mapped as such, does have some basis in fact. Parts of the Amazon were, at the time, dominated by a large and powerful Indigenous trading nation known as the Manoa. The Manoa traded the length and breadth of the Amazon. The onset of the rainy season inundated the great savannahs of the Rupununi, Takutu, and Rio Branco or Parima Rivers. This inundation briefly connected the Amazon and Orinoco river systems, opening an annual and well used trade route for the Manoans. The Manoans who traded with the Incans in the western Amazon, had access to gold mines on the western slopes of the Andes, and so, when Raleigh saw gold rich Indian traders arriving in Guyana, he made the natural assumption for a gold hungry European in search of El Dorado. When he asked the Orinocans where the traders were from, they could only answer, 'Manoa.' Thus did Lake Parime or Parima and the city of Manoa begin to appear on maps in the early 17th century. The city of Manoa and Lake Parima would continue to be mapped in this area until about 1800

Very Good. Some softness of strike near centerfold.