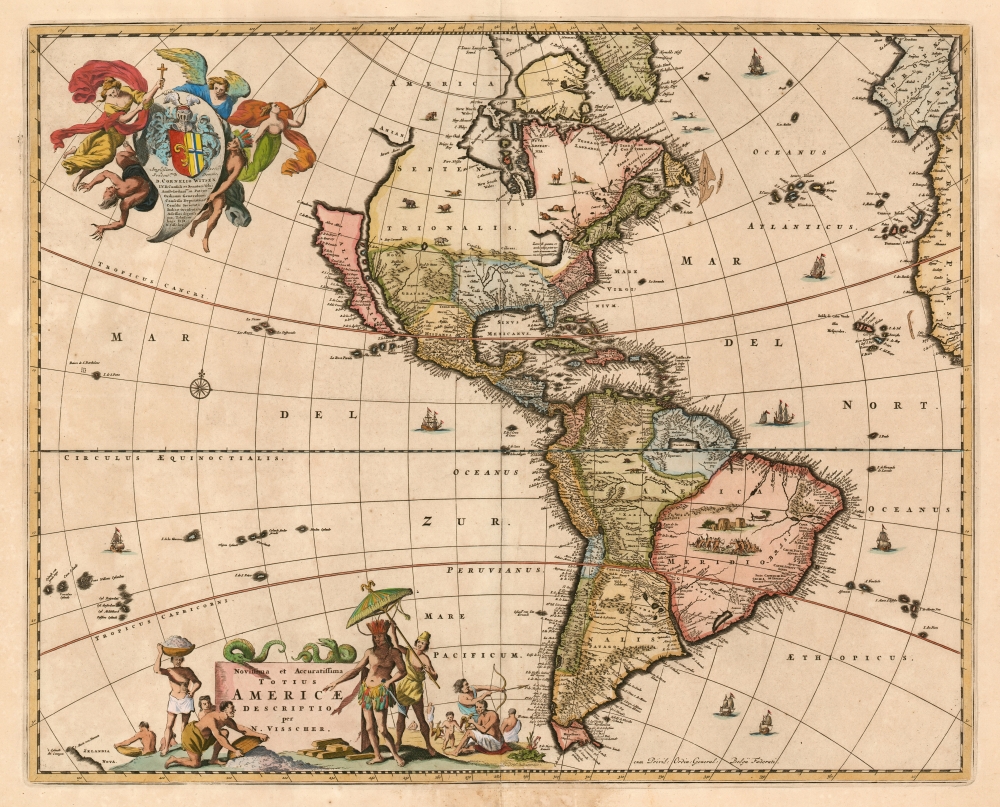 This is a c. 1677 example of Nicolas Visscher's 1658 map of America. Depicting all of the New World, including part of the Atlantic coasts of Europe and Africa, and a scattering of Pacific Islands, this map enjoyed a long print run and was shamelessly copied by several competing Dutch publishers. The map itself is cartographically based on information drawn from the 1648 Joan Blaeu world map. Thus, Visscher's map was a conduit for Blaeu's American geography to spread throughout the map publishing world. By far this map's most striking cartographic elements deal with its unusual treatment of North America, with California represented as an island, the Great Lakes rendered as a single body of water open to the west, and the strait of Anian appearing far to the north.

This is one of the most attractive Dutch Western Hemisphere maps to depict California as an island. The concept of an insular California first appeared as a work of fiction in Garci Rodriguez de Montalvo's c. 1510 romance Las Sergas de Esplandian, where he writes

Baja California was subsequently discovered in 1533 by Fortun Ximenez, who had been sent to the area by Hernan Cortez. When Cortez himself traveled to Baja, he must have had Montalvo's novel in mind, for he immediately claimed the 'Island of California' for the Spanish King. By the late 16th and early 17th century, ample evidence had been amassed, through explorations of the region by Francisco de Ulloa, Hernando de Alarcon, and others, that California was in fact a peninsula. However, by this time other factors were in play. Francis Drake had sailed north and claimed 'New Albion' near modern day Washington or Vancouver for England. The Spanish thus needed to promote Cortez's claim on the 'Island of California' to preempt English claims on the western coast of North America. The first map to show the island of California in detail, the 1625 Briggs, was an English map. Visscher's map here presents the island following Briggs' model.

A Milestone of the Great Lakes

Visscher's rendering of the Great Lakes as a single body of water open to the west is one of the clearest borrowings from the younger Blaeu's 1648 wall map. It represents one of the first depictions of any lake associated with the Saint Lawrence River. It shares with the Blaeu the text originally appearing on the 1611 Jodocus Hondius wall map of the world, in relation to the Sea of Verrazano:

'This lake, as far as can be learned from the inhabitants, stretches at least three hundred miles in length'

The Sea of Verrazano was a 16th-century speculative body of water extending to the Pacific through the center of North America. Blaeu appears to have conflated this fictional sea with reports of the Great Lakes, and Visscher here presents Blaeu's interpretation in full. Later iterations of this map would see this great inland sea replaced by a more sophisticated rendering of the Great Lakes, drawn largely from French sources.

North of insular California we find the straits of Anian, separating an indistinct land of Anian from the North American mainland. Anian appears on maps of the Western Hemisphere as early as the 16th century, and the earliest known reference to it appears in the narratives of Marco Polo, who describes it as 'East of India.' In many early maps Anian appears, as it does here, as an imaginary proto-Bering Strait between Asia and America. Visscher's treatment of Anian is unusual, depicting both a land of Anian and a strait, and suggesting the possibility that Anian might connect to the Asian mainland rather than to North America.

In many period maps and literature, Anian is associated with the Northwest Passage: John Donn wrote 'Anyan if I go west by the North-West passage.' Visscher's treatment of the Northwest Passage is most curious, for he intentionally and fully closes the Hudson Bay while leaving the Strait of Anian open at the eastern end, suggesting, possibly, that the only hope of discovering the legendary passage must come from the west.

Visscher appears prescient in his rendering of mountains in the western part of North America. Since these parts of America were almost entirely unexplored by Europeans, the inclusion of mountains here can only be described as fortuitous. As is the case with other 17th century depictions of the Southwest, the Santa Fe is conflated with the Rio Grande, channeling the outflow of an imaginary southwestern lake into the sea lying between California and America.

In Visscher's time many Europeans believed that the most likely site of El Dorado was the mythical city of Manoa located here on the shores of the Lake Parima, near modern day Guyana, Venezuela, or northern Brazil. Manoa was first identified by Sr. Walter Raleigh in 1595. Raleigh does not visit the city of Manoa (which he believes is El Dorado) himself, nonetheless, he describes the city, based on indigenous accounts, as resting on a salt lake over 200 leagues wide. This lake, altough no longer mapped as such, does have some basis in fact. Parts of the Amazon were at the time dominated by a large and powerful indigenous trading nation known as the Manoa. The Manoa traded the length and breadth of the Amazon. The onset of the rainy season inundated the great savannahs of the Rupununi, Takutu, and Rio Branco or Parima Rivers. This inundation briefly connected the Amazon and Orinoco river systems, opening annual and well-used trade routes. The Manoans, who traded with the Incans in the western Amazon, had access to gold mines on the western slopes of the Andes, and so, when Raleigh saw gold rich Indian traders arriving in Guyana, he made the natural assumption for a rapacious European in search of El Dorado. When he asked the Orinocans where the traders were from, they could only answer, 'Manoa.' Thus did Lake Parime or Parima and the city of Manoa begin to appear on maps in the early 17th century. The city of Manoa and Lake Parima would continue to be mapped in this area until about 1800.

Further south Visscher maps a large and prominent Laguna de Xarayes as the northern terminus of the Paraguay River. The Xarayes, a corruption of 'Xaraiés' meaning 'Masters of the River', were an indigenous people occupying what are today parts of Brazil's Matte Grosso and the Pantanal. When Spanish and Portuguese explorers first navigated the Paraguay River, as always in search of El Dorado, they encountered the vast Pantanal flood plain at the height of its annual inundation. Understandably misinterpreting the flood plain as a gigantic inland sea, they named it after the local inhabitants, the Xaraies. The Laguna de los Xarayes, accessible only through the Gate of Kings, almost immediately began to appear on early maps of the region and, at the same time, took on a legendary aspect. The Lac or Laguna Xarayes was often considered to be a gateway to the Amazon and the Kingdom of El Dorado. Here Visscher's rendering suggests exactly that, with a wide navigable Rio De La Plata leading directly to the Paraguay River and connecting clearly to the Lago de los Xarayes and thus the Amazon itself.

The map is dedicated to Cornelius Witsen, whose arms appear in the beautiful dedicatory cartouche, flanked by a trio of angels triumphant over a fallen devil and an Indian - whose allegiance in the conflict is not abundantly clear. Cornelis Jan Witsen (1605 - 1669) was an important figure in Dutch politics, holding a post as governor of the Dutch West Indies Company and membership in the Dutch Admiralty.

This is the second state of this map, bearing Visscher's privilege, a kind of early copyright, awarded around 1677. The map appeared in Nicolas Visscher II's atlases from that point well into the early 18th century. This important map is well represented in institutional collections.

Claes Jansz Visscher (1587 - 1652) established the Visscher family publishing firm, which were prominent Dutch map publishers for nearly a century. The Visscher cartographic story beings with Claes Jansz Visscher who established the firm in Amsterdam near the offices of Pieter van den Keer and Jadocus Hondius. Many hypothesize that Visscher may have been one of Hondius's pupils and, under examination, this seems logical. The first Visscher maps appear around 1620 and include numerous individual maps as well as an atlas compiled of maps by various cartographers including Visscher himself. Upon the death of Claes, the firm fell into the hands of his son Nicholas Visscher I (1618 - 1679), who in 1677 received a privilege to publish from the States of Holland and West Friesland. The firm would in turn be passed on to his son, Nicholas Visscher II (1649 - 1702). Visscher II applied for his own privilege, receiving it in 1682. Most of the maps bearing the Visscher imprint were produced by these two men. Many Visscher maps also bear the imprint Piscator (a Latinized version of Visscher) and often feature the image of an elderly fisherman - an allusion to the family name. Upon the death of Nicholas Visscher II, the business was carried on by the widowed Elizabeth Verseyl Visscher (16?? - 1726). After her death, the firm and all of its plates was liquidated to Peter Schenk. Learn More...

Good condition. Some staining and minor wear at centerfold, with a marginal reinforcement.