1841 Wyld Map of the Western Hemisphere w/ Republic of Texas 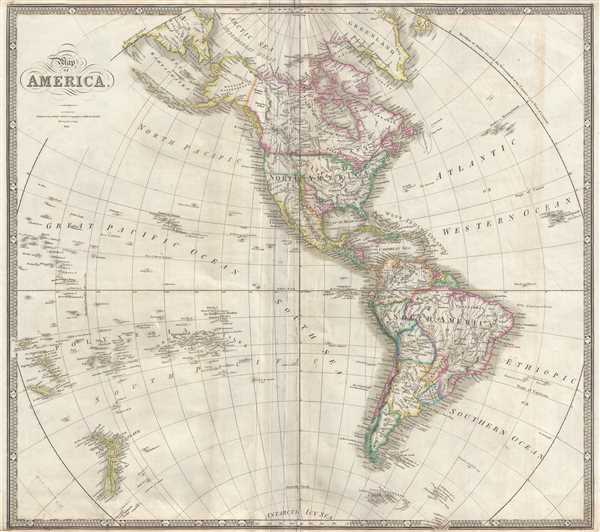 1841 Wyld Map of the Western Hemisphere w/ Republic of Texas

Features an unusual depiction of the Republic of Texas.

This is an 1841 James Wyld map of the Western Hemisphere, including the Republic of Texas. The map depicts the region from the New Hebrides and New Caledonia in the Pacific to the Cape Verde Islands in the Atlantic and from the Arctic Ocean to New Zealand and the South Shetland Islands. Created almost precisely in the middle of the existence of the Republic of Texas, the Republic is highlighted in light pink and features the border as claimed by Texas along the Rio Grande River. It also nearly illustrates what has become known as the 'stove pipe' configuration of the Republic, though it is not perfectly discernable.

The Geography of the Republic of Texas

The geography of Texas illustrated here is unusual, as it does not conform to Texas's claim to all land east of the Rio Grande, which extended north to modern-day Wyoming, to the U.S. border, which at that time was the Arkansas River. The Republic of Texas would exist for another five years, until Texas was formally admitted to the United States in December 1845 and ceded its sovereignty to the United States on February 19, 1846. The annexation of Texas led to a deterioration of foreign relations between the United States and Mexico due to an unresolved border dispute between Texas and Mexico and directly led to the Mexican-American War.

Mriad locations are labeled throughout North, Central and South America. Cities, such as New York, Boston, Philadelphia, Charleston, Veracruz, Guadalajara, Caracas, Quito, Rio de Janeiro, Buenos Aires, and Santiago are all present, along with rivers (the Amazon and the Mississippi), and the Great Lakes. The Erie Canal, which ran from Lake Erie to Albany, is also illustrated. As the Mexican-American War was still five years away, the border between the United States and Mexico was still fixed at 42nd parallel, meaning that most of what constitutes the modern American Southwest was still a part of Mexico. In the Pacific, numerous archipelagos are illustrated and labeled, usually to a degree of detail such that individual islands bear labels. In one such archipelago, the Hawaiian archipelago (labeled here as the Sandwich Islands), the islands bear names that are nearly identical to those used today, although the phonetic spellings differ greatly from today's versions.

This map was created and published by James Wyld in 1841.

Good. Even overall toning. Light soiling. Exhibits wear, cracks, and other damage around the centerfold. Stabilized and backed on archival tissue. By no means perfect.