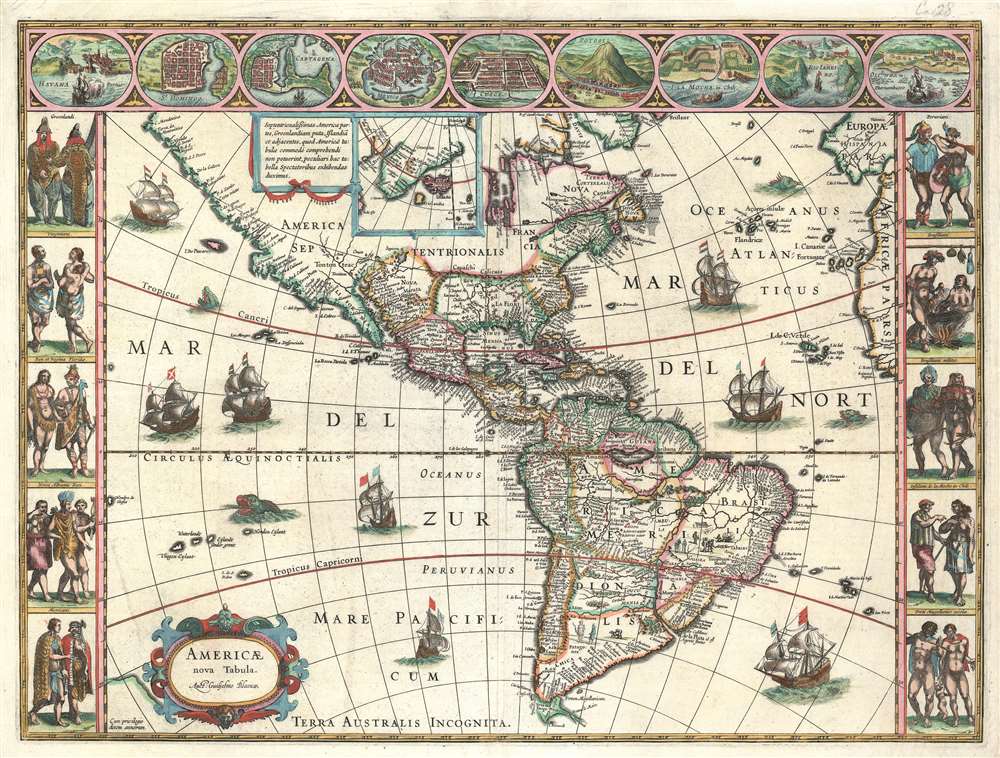 This is Willem Janszoon 'Guillaume' Blaeu's 1635 carte-a-figure map of America. The map covers North and South America and the surrounding seas, extending eastward to Europe and Africa, and westward to the unexplored central Pacific. The map is much admired for its elaborate decorative surround, including images of Indigenous Americans in typical dress, including Virginians, Floridians, Californians (Nove Albions), Mexicans, Chileans, Magellianici, Brazilians, and more. Across the tip are plans of the most important colonial cities, including, from left, Havana, Santo Domingo, Cartagena, Mexico, Cusco, Potosi, La Mocha, Rio de Janeiro, and Olinda. Decorative ships and sea monster fill the seas.

Cartographically the map was been updated from earlier editions to reflect a better understanding of Tierra del Fuego and the Strait of Magellan. It also includes Hudson's Bay, although the Great lakes have yet to manifest. The coast of North America in the vicinity of the Outer Banks juts noticeably, a cartographic error derived from earlier maps by Mercator/Hondius. Highlights include the identification of Nurmebega, a kind of New England El Dorado, and El Dorado itself in South America.

Norembega or Nurembega appears in what is today New England. This mysterious land began being mapped with Verrazano's 1529 manuscript chart of America. He used the term, Oranbega, which in Algonquin means something on the order of 'lull in the river'. The first detailed reference to Nurumbeg, or as it is more commonly spelled Norumbega, appeared in the 1542 journals of the French navigator Jean Fonteneau dit Alfonse de Saintonge, or Jean Allefonsce for short. Allefonsce was a well-respected navigator who, in conjunction with the French nobleman Jean-François de la Roque de Roberval's attempt to colonize the region, skirted the coast south of Newfoundland in 1542. He discovered and apparently sailed some distance up the Penobscot River, encountering a fur rich American Indian city named Norumbega - somewhere near modern-day Bangor, Maine.