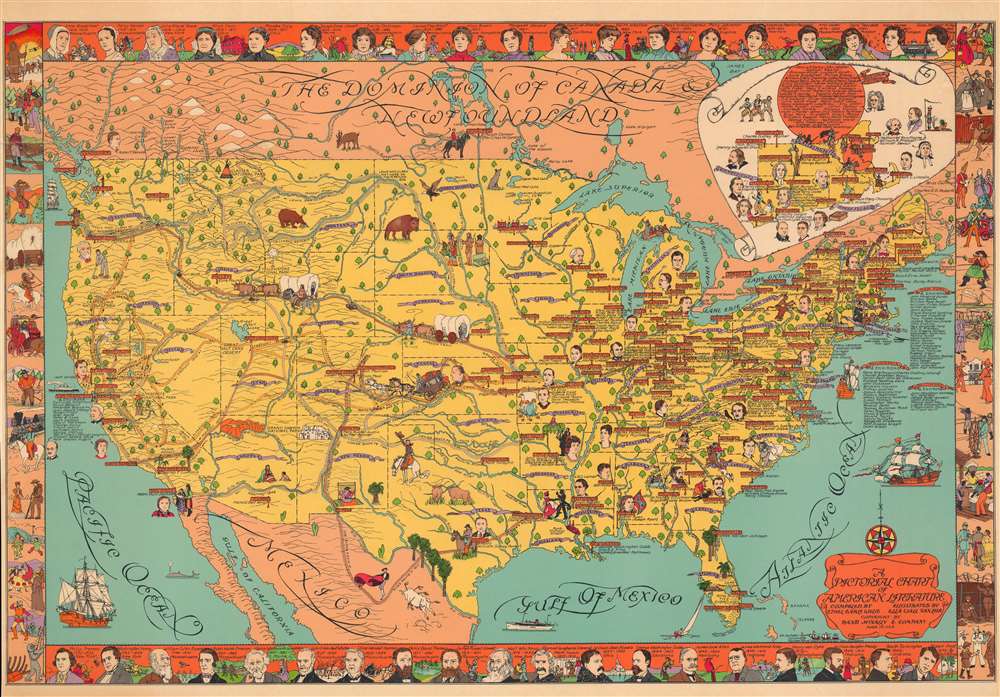 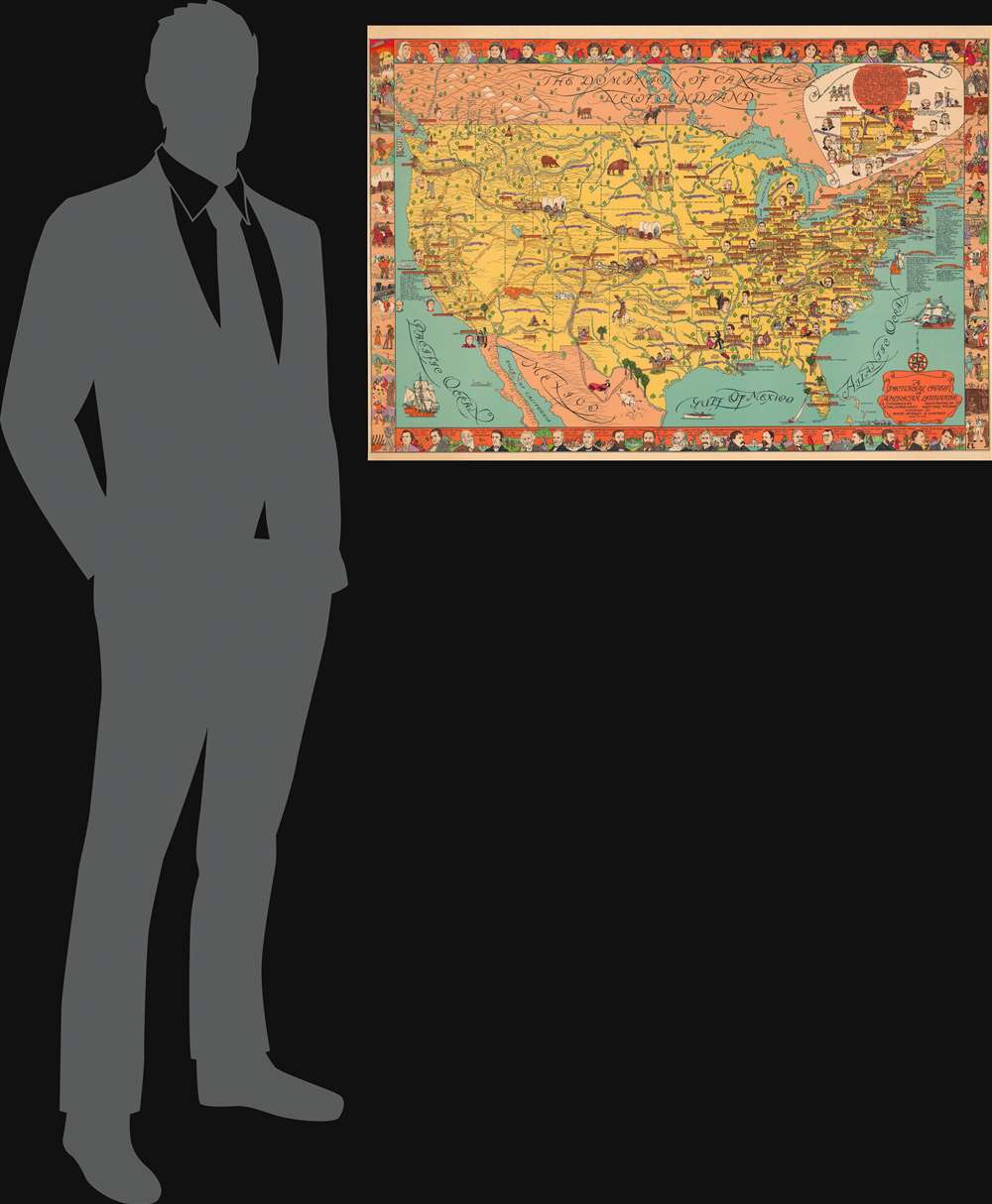 This is a 1932 Ethel Earle Wylie and Ella Wall Van Leer pictorial map of the United States celebrating American literature. Ethel and Ella give pride of place to their fellow female authors, whose portraits take pride of place along the top of the map. The work humorously contextualizes American literature in terms of American History, Westward Expansion, and Geographic Determinism.

Well over one hundred authors are identified from coast to coast, each named near their hometown. Lists for New York, Philadelphia, and Baltimore are included off the Atlantic coast and an inset of Massachusetts, Connecticut, and Rhode Island occupies the top right. The largest concentration west of the Mississippi appears in San Francisco and its environs. Portraits of particularly famous authors adorn the map, with Edgar Allan Poe, Benjamin Franklin, and James Fenimore Cooper among them. Important natural sites are illustrated as well, including the Grand Canyon, Yellowstone National Park, and Glacier National Park. Historical events, such as Charles Lindbergh's departure on his transatlantic flight, are referenced. Portraits of nineteen female American authors create the top border and include Edith Wharton, Emily Dickinson, and Louisa May Alcott. Portraits of male authors, among whom are Mark Twain, Ralph Waldo Emerson, and a young Robert Frost, occupy the bottom border.

Pictorial qualities have been common in cartography from at least from the 16th century when publishers like Braun and Hogenberg incorporated view-like qualities and other pictorial elements into their famous city plans. Braun and Hogenberg, and similar cartographers, issued their town books to express, not necessarily the geography of their subjects, but rather the 'essence' of the town/city. As mathematics and surveying principles became more advanced, travel increased, and the ability to translate 2 dimensional cartographic perspectives into an understanding of the actual world became commonplace, maps themselves transformed. This trend is a recognizable progression that evolved cartographic conventions from the 17th to the 19th centuries. By the late 19th century most maps had become geographical tools that illustrated the region cartographically but failed in the original raison d'être as expressed by Braun and Hogenberg, to illustrate a place's 'essence'. So, where a city map of 19th century Paris might provide a completely navigable presentation of the city, one could glean almost nothing of Paris' character from it. In the late 18th century, the first modern 'pictorial' style maps developed. These maps, like Tomas Lopez's 1788 map of Seville, attempted to provide both cartographic accuracy and pictorial elements that might convey the character of the city. In that case, Lopez incorporated pictorial vignettes to illustrate important buildings and monuments. This style became increasingly common throughout the 19th century and early 20th centuries, particularly for centers of commerce like London, Paris, and Rome, where they are often mass produced and referred to as 'monumental' maps. The style further evolved in the early to mid-20th century, when revolutionary cartographers and illustrators like MacDonald Gill, Jo Mora, Frank Dorn, Ernest Dudley Chase, and many others, combined vignette style illustrations, modern printing techniques, inspiration from Japanese printmaking and manga, and from clever satirical cartographers/artists like Fred Rose, to produce maps that once again focused on revealing the essence a place, usually, but not always, at the sacrifice of cartographic precision.

This map was compiled by Ethel Earle Wylie, illustrated by Ella Wall Van Leer and published by Rand McNally and Company in 1932. We note five examples cataloged in OCLC which are part of the collections at the Library of Congress, Pennsylvania State University, the University of Chicago, the Illinois State Library, and The British Library. Examples are also part of the David Rumsey Map Collection and the American Geographical Society Library at the University of Wisconsin Milwaukee. Rarely seen on the private market.

Ethel Earle Wylie (1881 - 1962) was a Canadian American artist and teacher. Born in Canada, Wylie immigrated to the United States in 1889. Very little is known about her life and career, but we do know that she spent some time as a teacher in Oakland, California. It appears that she was also an extensive traveler, spending as much as six months in Europe at once. Learn More...


Ella Lillian Wall Van Leer (November 11, 1892 - August 8, 1986) was an American architect, artist, and women's rights activist. Born in Berkeley, California, Wall graduated from Berkeley High School in 1910 and then attended the University of California Berkeley. She received her M.A. in Art and Architecture from U.C. Berkeley in 1915. Even after earning a master's degree, she was not able to become a professional architect and was relegated to teaching both subjects at the high school level later in life. One of her first jobs after graduation was as an artist for Rand McNally. She enlisted in the Army Nursing Corps at Letterman Army Hospital on the Presidio in San Francisco in July 1918. She was mobilized for overseas servicer four months later. She served overseas until March 1920, then had a position at the U.S.A. General Hospital. Eventually she made her way back to California and found a teaching position. She became the first woman to hold an office in the American Legion in California in 1923 when she became second vice commander of Berkeley Post No. 7. Wall married Blake Ragsdale Van Leer in 1924 and continued pursuing her career as an artist during her marriage. She worked as an illustrator for Rand McNally (perhaps she had a position waiting for her after her Army service?) and Wall worked in the office of the Quartermaster General during World War II as a principal draftsman and technologist of the research and development branch in Washington, D.C. Wall's husband became president of the Georgia Institute of Technology in 1944 and she became the 'backbone of women' and their 'unofficial dean' not long after arrival. She tirelessly campaigned for women's rights and even successfully petitioned to overturn a statute barring women from enrolling at Georgia Tech. After the first women enrolled at the school, Wall helped establish the first scholarship for female students, along with an official chapter of the Alpha Xi Delta sorority, the first sorority at an engineering school. Her husband died in 1956 and Wall bought a house near Georgia Tech and turned it into 'an unofficial women's dormitory'. She retired in 1976. Wall died in Arlington, Virginia, and is buried at the Marietta National Cemetery in Cobb County, Georgia. She and her husband had two children. Learn More...

Good. Laid down on heavy linen.