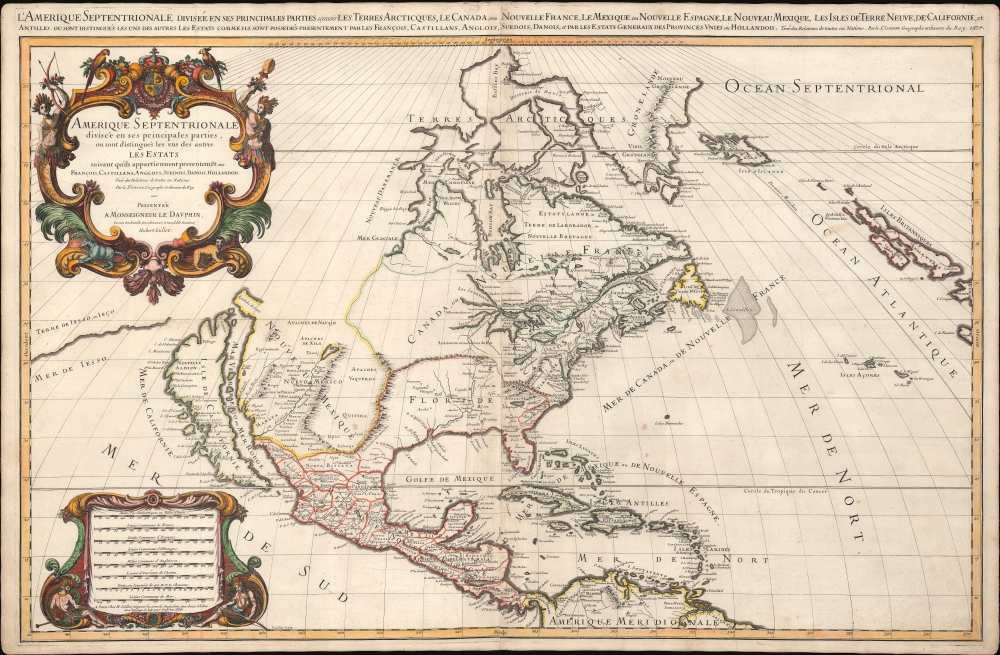 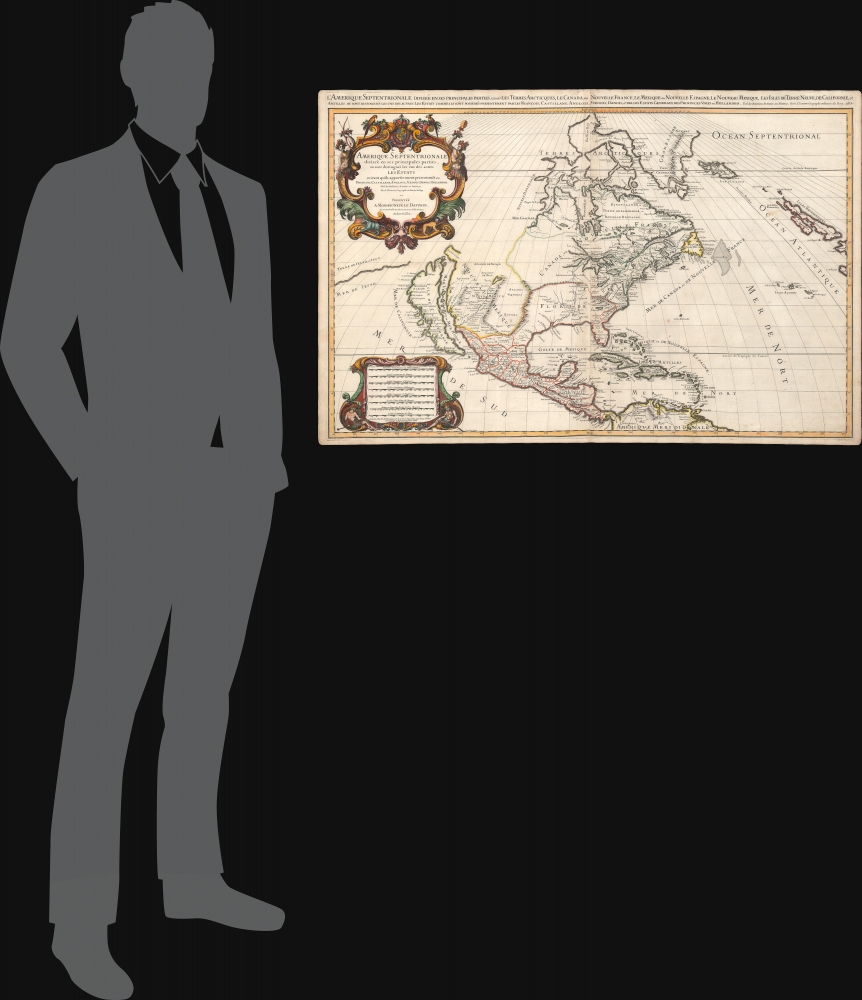 The first appearance of the Marquette-Joliet Mississippi River cartography.
$7,500.00

An impressive and scarce 1674 map of North America issued by Alexis-Hubert Jaillot, offered here in its first edition, and likely exhibiting preliminary data from the 1673 Marquette-Joliet Expedition. The map covers North America and Central America from Baffin Bay to the Spanish Main. It extends westward past an Insular California to include Terre de Iesso (a speculative mapping of Hokkaido) and eastwards past the Azores to include the British Isles. It includes a striking mapping the Mississippi (Chucagua), that while inaccurate in the southernmost regions, likely reflects Joliet's verbal reports from the seminal 1673 Marquette-Joliet Expedition.

The Mississippi River is here identified as 'Chucagua', a term derived from the journals of the De Soto Expedition. De Soto crossed the Mississippi River in 1541, naming it after the wild garlic that grew prolifically on the river edge, name in Algonquin, shikaakwa. The term was transliterated into French for the 1670 translation of De Soto's journals by Pierre Richelet, as the 'Chucagua River'. The same is also frequently called 'De Soto's River.' Mapped here by Jaillot, the river has its outlet in 'Bahia del Spiritu Santo', likely Galveston Bay, but inland bends sharply east, then north, to roughly correspond to the Upper Mississippi. This is a cartographic innovation unique to this map and present on no known prior map. Jaillot's sources behind this cartographic innovation can only be preliminary data from the 1673 expedition of Jacques Marquette (1637 - 1675) and Louis Joliet (1645 - 1700). From the cartography, this makes sense, as the map correctly but tenuously reflects Marquette and Joliet's four-month voyage in the Upper Mississippi, as well as the fact that they turned around at the Arkansas River - thus avoiding confrontation with the Spanish to the south, but also leaving unclear the true route south and outlet of the Lower Mississippi. The records of the Marquette and Joliet voyage were not widely disseminated, and instead kept under wraps until published in 1681. Nonetheless, Joliet did return to Paris shortly after the expedition and was extensively interviewed. Jaillot, with his royal connections, would have been privileged to this information - marking this map as a state-of-the-art production and likely the first map to reveal any reconnaissance from the Marquette-Joliet Expedition.

Aside from the above Mississippi River data, Jaillot derived this expanded format map from the earlier work of Nicholas Sanson, a figure who revolutionized French cartography. We can trace the fundamental design of this map to two Sanson maps. First, Sanson's 1666 wall map of North America - on which most of the basic cartography is based - and which survives in only two examples. Second, Sanson's 1657 map of California, from which both maps derive their model for Insular California - itself sourced from maps referencing the English explorer Luke Foxe's expedition in search of the Northwest Passage. Thus, the form of California seen here follows the Second Sanson model or, more properly, the Luke Foxe model. It was Foxe who is credited with introducing the curious form of northern Insular California, including the Bay of Talago, the Rio de Estiete, and the unusual peninsula extending from the mainland, Agubela de Gato. The origin of this cartography beyond Foxe remains a mystery. Adopted by Sanson in 1657, this form became standard convention for the representation of Insular California until the early 18th century.

Baja California was subsequently discovered in 1533 by Fortun Ximenez, who had been sent to the area by Hernan Cortez. When Cortez himself traveled to Baja, he must have had Montalvo's novel in mind, for he immediately claimed the 'Island of California' for the Spanish King. By the late 16th and early 17th century, ample evidence had been amassed through explorations of the region by Francisco de Ulloa, Hernando de Alarcon, and others, that California was in fact a peninsula. However, by this time other factors were in play. Francis Drake had sailed north and claimed 'New Albion' (identified here on the northwest coast of California Island) near modern-day Washington or Vancouver for England. There was thus some interest in promoting Cortez's claim on the 'Island of California' to preempt English claims on the western coast of North America. This led to a major resurgence of the Insular California theory. In the early 18th century, Eusebio Kino, a Jesuit missionary, traveled overland from Mexico to California, proving conclusively the peninsularity of California.

In addition to its remarkable presentation of California, this map also offers a very ephemeral perspective on the Great Lakes. While all five lakes are present, Lake Superior and Lake Michigan (Lac des Puans) are open at their westernmost extremes, thus illustrating the primitive state of exploration as well as the hopes of European traders that one of these lakes might access an inland water passage to the Pacific and the lucrative markets of Asia. Lake Huron is identified according to its original Huron-Petun (Wyandot) name, Karegnondi (tr. 'Big Lake').

In Spanish Florida, which extends north to include most of the American Southeast, Lake Apalache, often called Lacus Aquae Dulces or the 'Freshwater Lake of the American Southeast' is noted. This lake, first mapped by De Bry and Le Moyne in the mid-16th century, is a mis-mapping of Florida's Lake George. While Theodor De Bry, working in 1565, correctly mapped the lake as part of the River May or St. John's River, subsequent navigators and cartographers in Europe erroneously associated it with the Savannah River, which instead of flowing south from the Atlantic (like the May), flowed almost directly from the northwest. This error was taken up by Hondius and Mercator who, in their 1606 map, invert the course of the May River thus situating this lake far to the northwest in Appalachia. Consequently, 'through mutations of location and size [this] became the great inland lake of the Southeast' (Cumming, 478) - an apocryphal cartographic element that would remain one of Le Moyne's most tenacious legacies. Lake Apalache was subsequently relocated somewhere in Carolina or Georgia, where Jaillot maps it and where it would remain on maps for several hundred years.

This map is identifiable as the first edition / first state because of (a) the date in the margin title, (b) the term 'milles' as the first word in the scale, and (c) the fact that none of the meridian lines run through the word 'Apache Vaqueros.' Burdon suggests that it was most certainly issued independently as early as 1674, but that it was not published in Jaillot's spectacular elephant folio L'Atlas Nouveau until that publication was finally issued in 1681. While all examples of this map are rare, and often in poor condition because of its immense size, it is notable that this is the first edition, and in near fine condition, and as such almost impossible to acquire.


Robert Cordier (16?? - c. 1673) was a French engraver and calligrapher active in Paris in the late 17th century. Originally from Abbeville, Cordier (and his brother Louis) were known for engraving works for Nicolas Sanson, who was also from Abbeville, and Hubert Alexis Jaillot. There are records of an engraver by the same name working in Madrid from 1629 - 1653, likely the same person. He also engraved images for the work of several prominent French novelists during his career. Learn More...