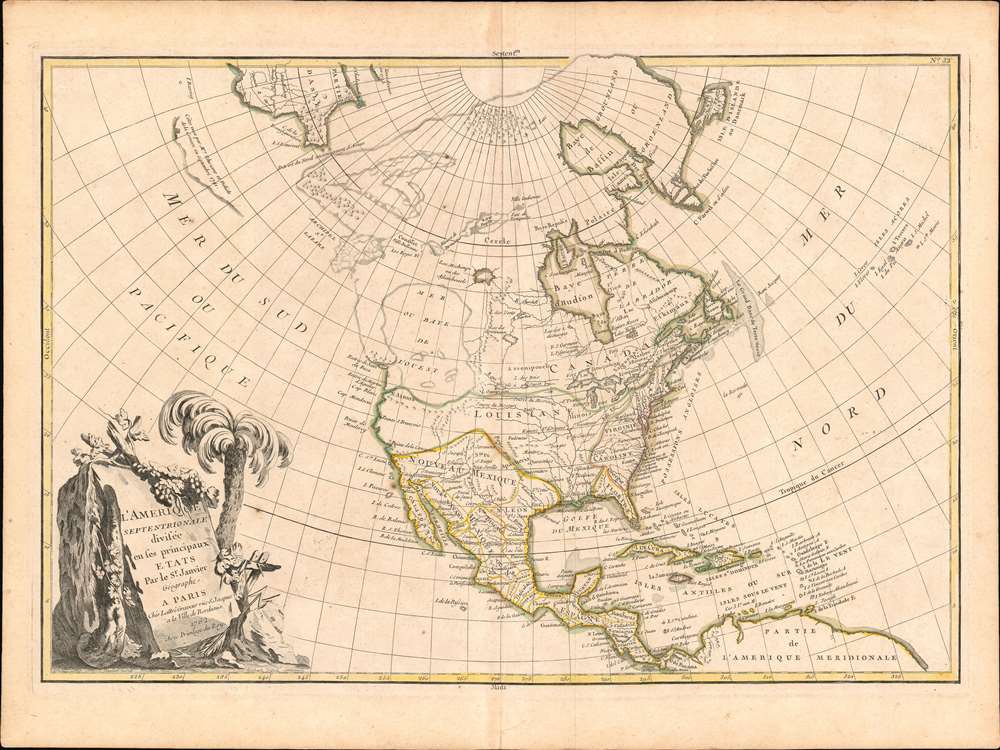 Massive apocryphal Sea of the West!

An altogether fascinating first edition example of Jean Janvier 1762 map of North America, including one of the most ambitious depictions of the Sea of the West ever published. Depicting the continent from Panama to the Arctic Circle, it also extends westward to include parts of Asia and eastward as far as Iceland. This map, which is heavily influenced by the theoretical mappings of Guillaume de l'Isle and Philippe Buache, went through several states of which this is the first and possibly the most interesting. Javier divides the continent according to the three colonial powers that controlled it, with England controlling its colonies along the east coast, France occupying Canada and Louisiana, and Spain dominating Mexico, Florida, Cuba and Central America.

By far the most interesting aspects of this map deal with Janvier's treatment of the largely unexplored Pacific Northwest. A magnificent sea, called the Sea of the West or in this case the 'Baye de L'Ouest,' occupies a large portion of the northwestern part of the continent. This body of water, alternatively called the 'Sea of the West' or 'Mer de l'Ouest', was speculated by Philippe Buache and Guillaume De l'Isle in the early 18th century based upon wishful thinking, American Indian stories, and the somewhat questionable 16th century explorations of Juan de Fuca. Janvier gives the Mer de l'Ouest its fullest expression, although he specifically does not connect it to either the network of lakes and rivers extending westward form the Hudson Bay or to the similar network extending westward from Lake Superior.

These river and lake networks were being actively explored throughout the early 18th century by a number of little known but important French explorers. The explorations of the La Vérendrye brothers, for example, and other coureurs des bois, include the discovery of the Lake of the Woods (L. Des Bois) and Lake Winnipeg (L. Ouinipigon), both of which appear on this map. However, despite the activity of French explorers and fur traders in this region, the entirety of the continent northwards of the Mississippi River watershed and the St. Lawrence River is not territorially assigned to any European Power. This little explored region was then subject to questionable colonial jurisdiction. The French claimed all modern-day Canada, but the entire region was also part of the Hudson Bay Company's royal charter. Legally this would become much clearer in the year after this map was issued. In 1763, following the Seven Years War, France ceded nearly all of its North American territory to England. Nonetheless, this poorly policed and vast land remained hotly contested on the practical level as fur traders, backwoodsmen, and coureurs des bois flooded the wilderness in search of its most treasured commodity, beaver pelts.

Further north we can find traces of Admiral de Fonte's apocryphal discovery of a passage from the Pacific (starting at the Archipel St. Lazare) eastward via a network of lakes and rivers to Baffin Bay. The De Fonte legend first appeared in a 1706 English publication entitled Memoirs of the Curious. This short-lived magazine published a previously unknown account by a supposed Spanish Admiral named Bartholomew de Fonte. De Fonte is said to have sailed up the Pacific coast of North America in 1640. On this voyage he apparently discovered a series of gigantic lakes, seas, and rivers heading eastward from the Pacific towards Hudson Bay. The De Fonte story relates how, on one of these great inland lakes, he met with a westward bound ship from Boston that must have come through the Northwest Passage. Today, based upon inaccuracies and falsities, we know the entire De Fonte article to have been a fabrication, however, it set 18th century society afire with speculation that a Northwest Passage must indeed exist. Even such luminaries as Benjamin Franklin wrote long defenses of De Fonte. Our map offers an uncommon variant on the De Fonte passage, positioning its western entrada well to the north in order to accommodate the Sea of the West and situating its outlet at the Baffin rather than the Hudson Bay.

Even farther to the north we find the Strait of Anian narrowly separating America from Asia. The extreme northeast tip of Asia is itself fairly well mapped, giving evidence to the explorations of Vitus Bering and Tschirikow. Slightly to the south of Asia, the cartography is slightly less certain with regard to a questionable landmass in the north Pacific. This mass most likely stems from Tschirikow's sightings of the Aleutian Islands and the assumption by Muller and others that they may have been a single land mass.

On the opposite side of the map, Janvier places the Great Lakes firmly within French territory, a clear case of carto-advocacy. The English colonies, outlined in red, are only vaguely accurate with regard to their borders with Pennsylvania and New Jersey extending north to the Canadian border. The lower left-hand quadrant is dominated by a large decorative title cartouche depicting some of the flora of the continent.

This map was drawn by Jean Janvier for issue as plate no. 32 in Jean Lattre's 1762 first edition issue of the Atlas Moderne. Though most examples of this map are dated 1762, the map itself appeared in multiple states between its first edition in 1762 and final iteration in the late 1780s. We have identified at least four variants. The first edition, 1762, includes a large 'Sea of the West', a series of lakes and rivers associated with the legendary voyages of Admiral de Fonte, and the Aleutians rendered as a single landmass, a la Muller. A second variant, possibly 1775, includes the De Fonte speculation, and the 'Lake of the West', but renderers the Aleutians embryonically as a series of islands. Another third state, possibly from 1782, retains the 'Sea of the West', but does not include the De Fonte discoveries further north, and the Aleutians are embryonically rendered as individual islands. There may be still other variations we have yet to discover, including a 1771 issue and a 1783 issue illustrating a post-Revolutionary War Untied States. A full series of these beautifully produced maps presents a thorough overview of the conceptual development of the American northwest prior to Cook.