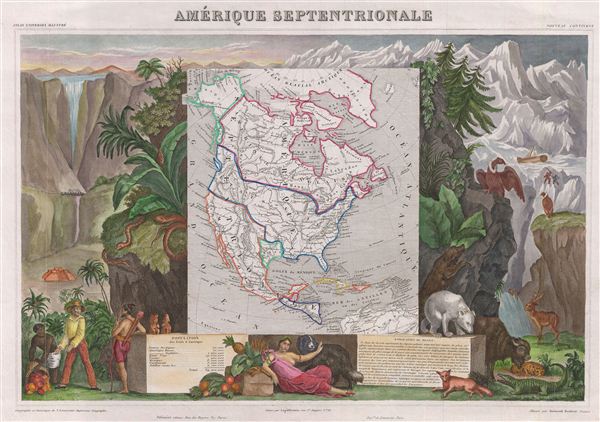 This particular map is surrounded by wide and elaborate illustrative border work showing the cultural, natural, and trade richness of the Americas. The left hand side of the map depicts european seamen bargaining for indigenous products. In the background is a Mesoamerican style pyramid, dramatic mountain scenery, and a railroad train. The right hand side of the map shows a cross-section of the flora and fauna common to the continent, including a Bison, vultures, a polar bear, an elk, a fox and an alligator. In the undergrowth, a leopard lies hidden. At the base of the map a classically dressed woman lounges with a St. Bernard and Bale of Cotton. To either side her text boxes offer additiona information about the discovery, history, and culture of the region. A population table appearing at the bottom of the map gives statistics for the Arctic (50,000), Alaska or Russian America (50,000), British America (1,200,000), the United States (19,000,000), Texas (200,000), Mexico (8,000,000), Guatemala (3,000,000), and the Antilles (2,720,000)
Publised by V. Levasseur in the 1852 edition of his Atlas National de la France Illustree.