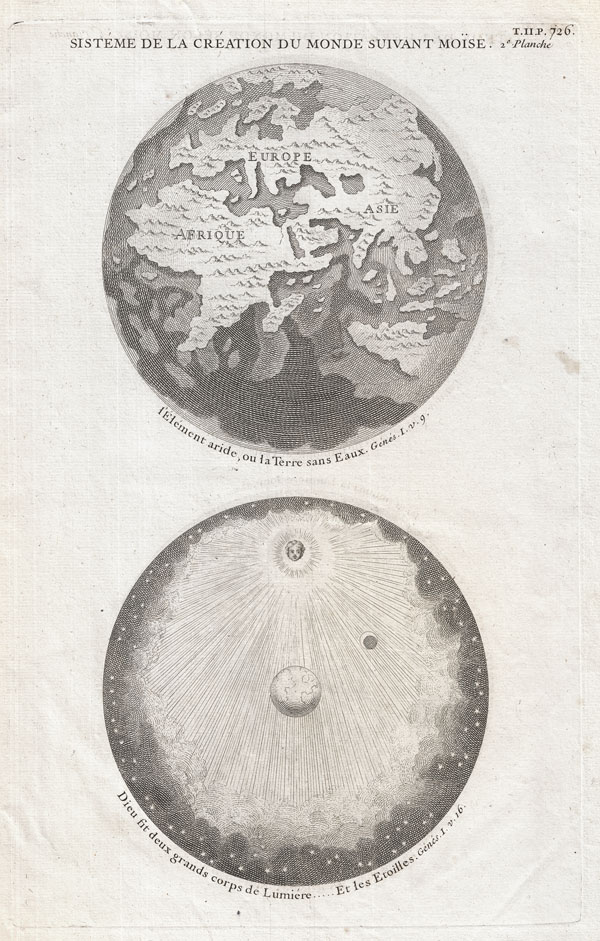 A curious c. 1728 mapping of the ancient world and the cosmos rendered from an arcane Biblical perspective. Though composed well after the discovery of the New World and the circumnavigations of Magellan and Drake, this two part diagram represents a very medieval view of the world. The upper map, though ostensibly the Eastern Hemisphere, actually follows a medieval doctrine advocated by Francis Bacon. That is, the belief that the physical earth was large ball of rock resting within a great sphere of water. The habitable lands of the earth, Asia, Europe, and Africa, were pieces of this rock that emerged from the waters when God caused the ball of rock, Earth, to float in the northern part of the watery sphere - much as a baseball might float in a bucket of water. This argument was used in the middle ages to prove that the antipodes, or the lands south of the equator, must not emerge from the sea, for necessarily, if the earth is floating at the northern part of the watery sphere, the southern parts must be covered fully by deep seas. Hence the darker shading, indicating fathomless depths, in the southern parts of the map. The lower sphere depicts the cosmos from a pre-Copernican perspective. Earth rests at the center of the universe, around which the Moon, Sun (here drawn as benevolent God), and the stars rotate. The curious diagram was included in Augustin Calmet's influential 18th century Biblical dictionary.

Antoine Augustin Calmet (February 26, 1672 - October 25, 1757) was a French Benedictine monk and Biblical scholar active in the late 17th and early 18th century. Calmut was born at Ménil-la-Horgne in Lorraine. He joined the Abbey of St-Mansuy at Toul in 1688. Approximately ten years later he was assigned to teach philosophy and theology in Moyenmoutier Abby. There he gathered the various materials and commentary with which he would eventually compose his important theological studies. Calmet's work initiated a new era of Biblical exegesis in which the dominant allegorical approach to theological analysis was replaced with a critical search for meaning and significance. Calmet was a religious as well as a learned man, and one of the most distinguished members of the Congregation of St. Vanne. In recognition of these qualities he was elected prior of Lay-Saint-Christophe in 1715, abbot of St-Léopold at Nancy in 1718, and of Senones Abbey in 1729; he was also twice entrusted with the office of president or superior general of the congregation. Pope Benedict XIII wished to confer Episcopal Dignity upon him, but in his humility could not be brought to accept the honor. Among Calmet's more interesting works is a 1746 treatise that ambiguously, though not explicitly, considers the existence of Vampires. Calmet died at Senones Abbey, near Saint-Dié, on 25 October 1757. Learn More...