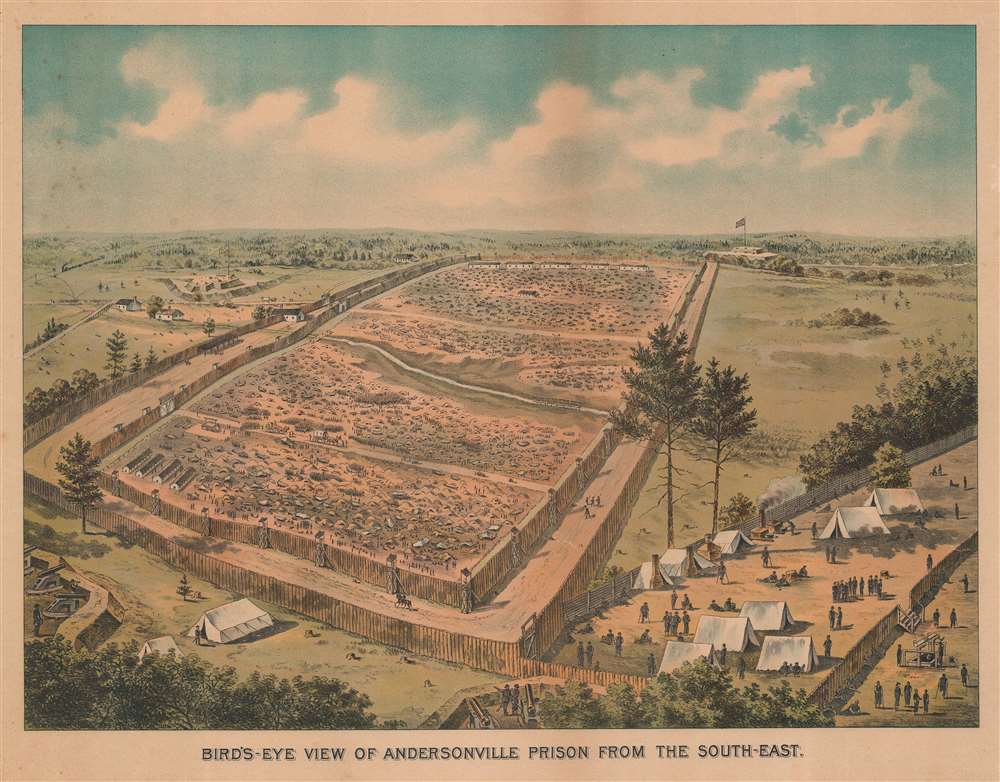 The Most notorious Confederate Prisoner of War camp.

This is an 1890 Joseph W. Morton Jr. bird's-eye view of the infamous Confederate Civil War Prisoner of War Camp at Andersonville, Georgia. After the Civil War, Andersonville became synonymous with the horrors the country inflicted on itself, encapsulating the entire war in the nation's memory. Per Paul Perreault, 'In the 1890 Census of Civil War Veterans and Widows, the single word 'Andersonville' was acceptable in the 'Disability Incurred' category.' Over 13,000 prisoners died while incarcerated at Andersonville. Photographs, novels, movies, paintings, and written memoirs all attested to the unimaginable misery experienced by those incarcerated.

Morton's view of Andersonville does little to disclose the horrors of life in the prison camp. The camp's walls are illustrated in detail, particularly its guard towers. Cannon emplacements are visible in the foreground. As stated in more detail below, no formal housing was built at Andersonville, which is reflected in the ramshackle protections from the elements visible here. What appear to be guards' quarters are illustrated in the foreground on the right

Andersonville was constructed to house 10,000 prisoners but at time accommodated over 35,000. Known as 'Hell Upon Earth' by those imprisoned there, the inmates faced famine, disease, and death daily. Rations were meager and consisted of cornbread, a few beans, and maybe some pork or bacon, but the meat quickly ran out. A stream, known as 'The Branch,' ran through the camp, but not before it ran through two Confederate camps and the prison bakehouse. 'The Branch' was the only water source, which meant it was used for drinking, cooking, and bathing, making clean water scarce at best. The cleanest water was on the other side of the 'Dead Line', a cord suspended three feet off the ground a few yards from the camp's timber walls. If a prisoner crossed this line in any way, even just reaching across to get some clean water in his cup or dipper, he risked being shot by one of the Confederate guards.

No formal housing was constructed at Andersonville. The prisoners were forced to use what they could find or scrounge, leading to most sleeping in holes in the ground and covered by scraps of cloth. The camp covered about thirty-six acres, six of which were completely uninhabitable swamp. New prisoners, known as 'fresh fish' arrived by train and were marched the half-mile from the rail line to the camp. The dead were taken out of the camp by cart every morning, after their comrades stripped them of any wearable clothing and carried them to one of the prison's two gates. Rations were distributed by the men themselves and there was a prisoner-led police force that kept the piece, as much as possible, and even set up an orderly system for accessing clean water.

This view was created and published by Joseph W. Morgan Jr. in 1890. We note three examples cataloged in: Library of Congress, the Boston Athenaeum, and the Osher Map Library at the University of Southern Maine. Rare on the market.

Joseph W. Morton, Jr. (1853 - December 11, 1918) was an American author and lithographer. Born in Philadelphia, Morton published a book of U.S. Civil War stories from veterans entitled Sparks from the Camp Fire, or Tales of the Old Veterans. He also served as associate editor of a monthly magazine called 'Blue and Gray'. Learn More...