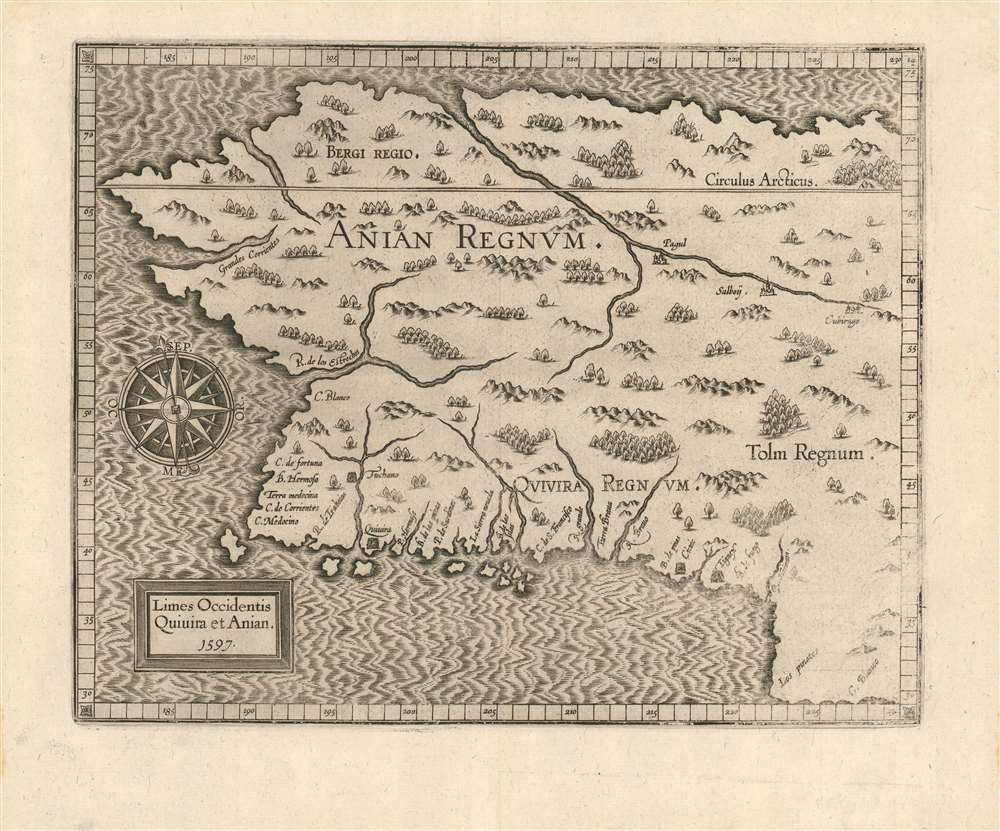 The first map to focus specifically on the Pacific Coast of North America.
$2,500.00

A strong example of Cornelis van Wytfliet's 1597 Anian Regnum. This is the first separate map to focus on the Pacific Northwest. The map presents the area now occupied by most of the west coast of the United States, Canada, and Alaska, despite this region having been beyond the ken of European explorers and geographers for centuries to come. The westward-reaching land mass bears a serendipitous resemblance to Alaska, although the area depicted is far more massive.

The overall cartography is derived from Mercator's 1569 World map. This portion begins almost immediately at the northernmost extent of the Baja Peninsula. The southernmost coastal place name, C. Blanco, appears there on Mercator's America map. The coastline as far north as C. Mendocino shows evidence of Spanish exploration and place names. Points further north than that - which is to say, the upper three-quarters of the map - are entirely speculative. Wytfliet agreed with the theory shared by Mercator, Ortelius, De Jode, and Plancius that America and Asia were separate landmasses, and this is forcefully presented here even though no European had yet ventured so far north along the Pacific coast. That the question whether Asia and America were, or were not connected would actually not be settled until Cook's expedition of the 18th century.

An Early Depiction of the American West

Wytfliet identifies several cities and kingdoms, most of which are mythical. The kingdoms of Anian, Quivira, and Tolm are all drawn from Mercator. He further identifies the cities of Tuchano, Quivira, Cicuic, and Tignex on the west coast and Pagul, Salboy, and Cibirago along an inland river system just south of the Arctic Circle. The sources of some of these place names are unknown, but others are traceable to the explorations of Cabrillo and Coronado's expedition to Cibola. The kingdoms of Bergi and Tolm were transposed to the Americas from earlier maps of Asia.

Wytfilet first published this map in 1597. A second state appeared in 1607, distinguishable by the removal of the 1597 date. Wytfliet published this map in his Descriptionis Ptolemaicae Augmentum, intended to supplement Ptolemy's Geographica with maps of the parts of the world discovered long after the Alexandrian scholar's second century work. We see eighteen examples of the separate map, in various editions, in OCLC. The Descriptionis Ptolemaicae Augmentum is well represented in institutional collections. This map and the parent work are today increasingly scarce on the market.

Cornelius van Wytfliet (1555 - 1597) was a Flemish cartographer and engraver active in the second half of the 16th century. Little unfortunately is known of Wytfliet's life or education. He seems to have been employed as secretary to the Council of Brabant, essentially the supreme court of the Duchy of Brabant. In cartographic circles Wytfliet is best known for his publication in 1597 of Descriptionis Ptolemaicae Augmentum, the first atlas dedicated exclusively to the America's. Wytfliet imaged the atlas as a supplement to classical Ptolemaic geographic, which traditionally accounted only for Europe, Africa, and Asia. The 19 maps contained within the Descriptionis Ptolemaicae Augmentum are some of the earliest specific maps detailed various parts of the Americas. Learn More...

Very good. Minor stains at extremity of margins well away from image. Strike a little soft at lower right.