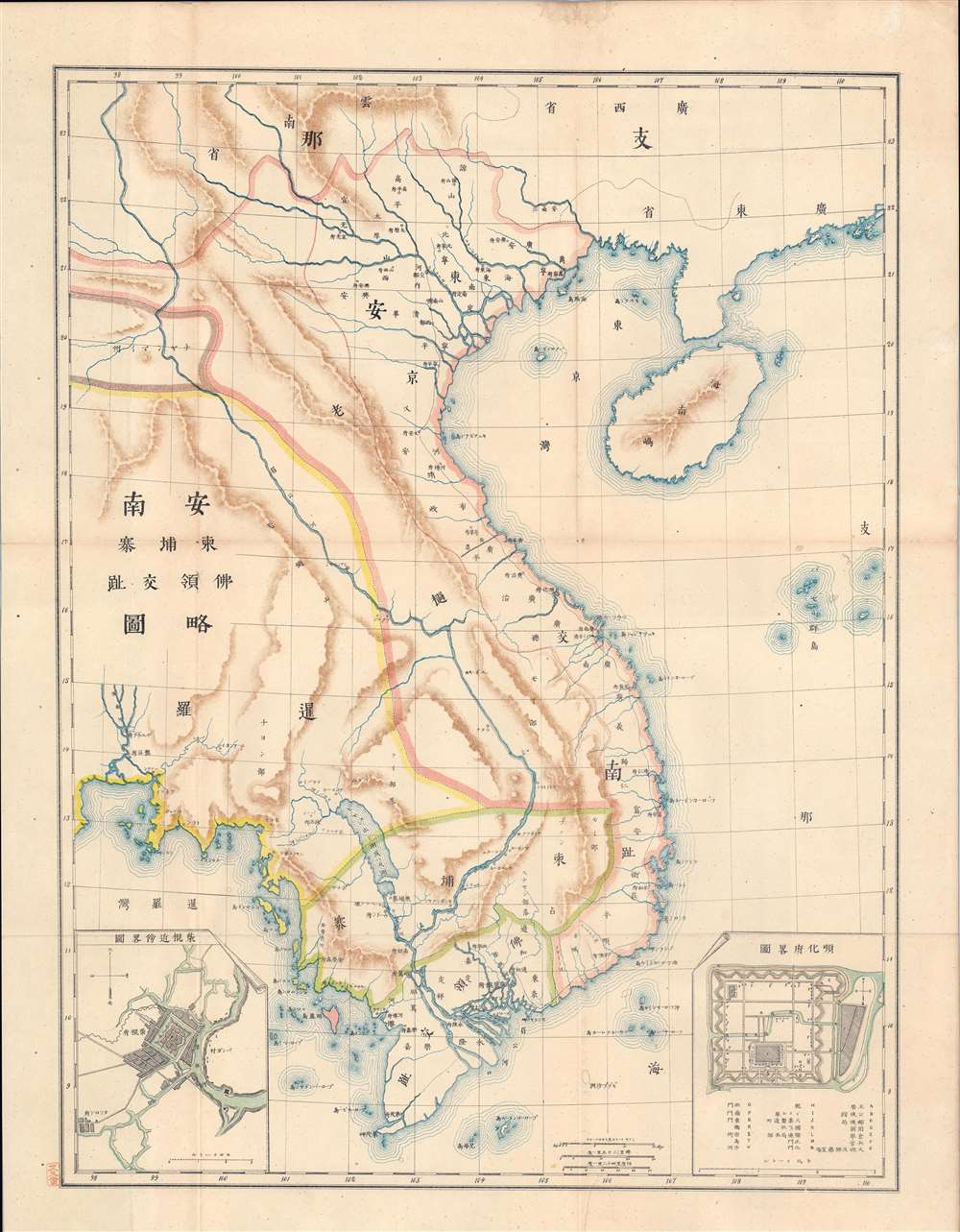 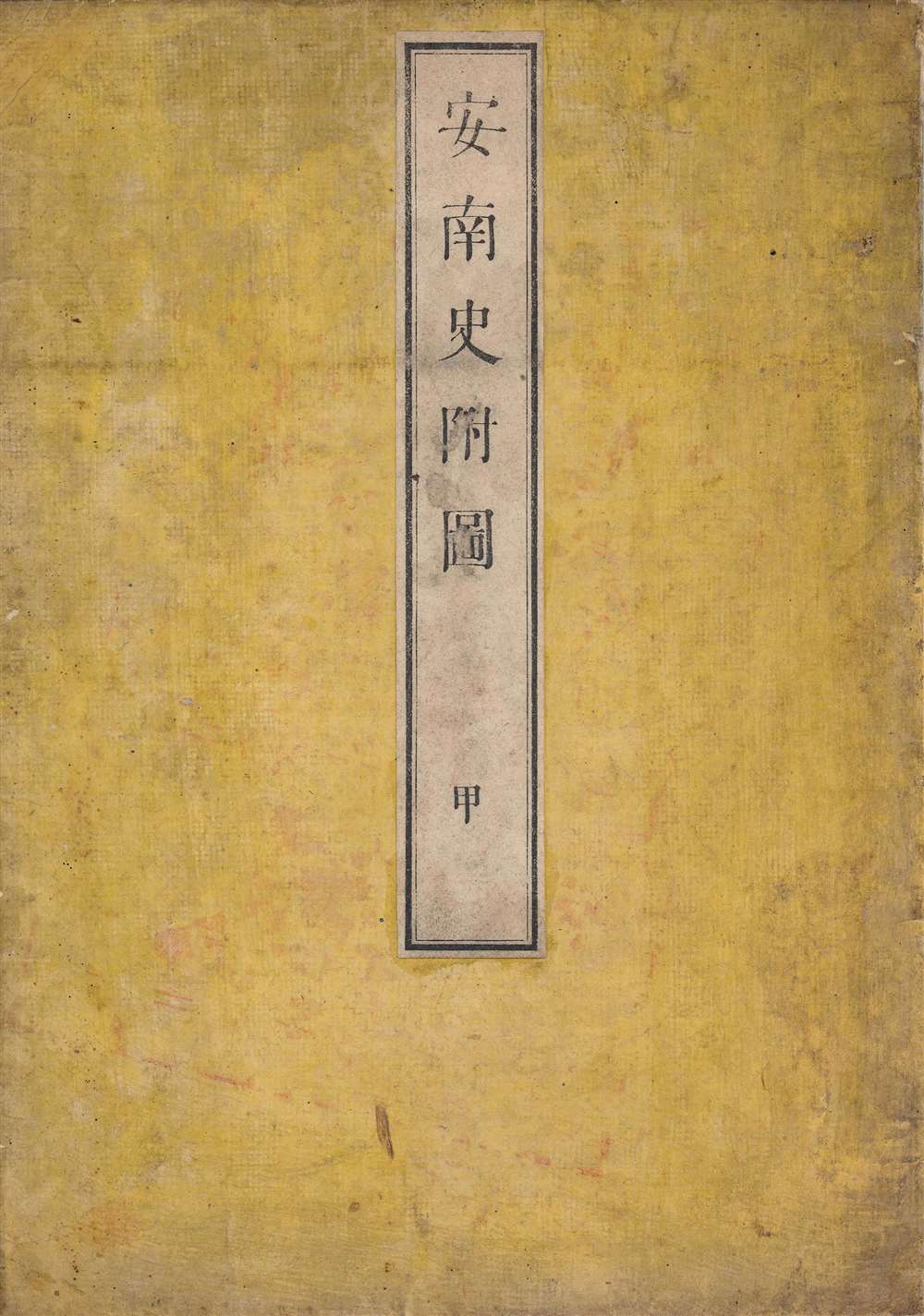 This is an 1881 or Meiji 14 Rikugun Bunko map of Annam, Cambodia, Cochinchina, and Laos, as well as parts of Siam and China. It includes inset maps of Hue (順化府), showing the location of important buildings and fortifications in the Nguyen Dynasty's administrative capital, as well as Saigon (柴棍) and its surrounding area. The map also has latitude and longitude grid lines and three scales at bottom, showing kilometers and myriametres, 'French ri' (probably the lieue or league of about four kilometers), and Indian miles. It indicates major mountain ranges, rivers and lakes, coastal regions, and islands. Since this map and the translation of the longer work it was attached to were published for the Japanese military, it is likely that this map was made to assist Japanese strategists and military officers in anticipation of future conflict.

This map was produced during a period when Japan had already launched a dramatic modernization drive and was engaging more in the affairs of the greater world. At this time, Japan was keen to emulate Western powers, including their colonial empires, leading to tension with surrounding countries. Japan's decades-long struggle with Russia in northeast Asia and its complex relationship with Great Britain are well-understood, but its relationship with France less so. Although they maintained cordial relations throughout the Meiji Era, both countries had their eye on Taiwan (Japan had launched a military expedition in 1874 and France would soon - in 1884-85 during the Sino-French War) and Japan had annexed the Ryukyu Islands soon before this map was produced. In 1881, Annam remained independent, ruled by the Nguyen Dynasty, whom the French had assisted in their unification of Vietnam in the early nineteenth century. However, French interest in Southeast Asia continued, and in the late 1850s-mid 1860s France fought several battles with Nguyen forces and gained control of Saigon and the surrounding provinces, establishing the colony of Cochinchine. In the following years, France continued to exert influence in Vietnam, to the annoyance of China, Vietnam's nominal protector. Soon after this map was produced, France invaded Nguyen territory, established the protectorates of Annam and Tonkin (keeping the Nguyen kings as figureheads), and engaged Chinese irregular forces (the Black Flag Army) in a series of intense battles, leading to the Sino-French War (1884 - 1885).

This map was an appendix to the 1881 work History of Annam (安南史), which was translated from an earlier Chinese text by Hikita Toshiaki (引田利章), a researcher with the Imperial Army, Professor at the Army War College, and an expert on Southeast Asia. It was published by Rikugun Bunko (陸軍文庫), a publisher affiliated with the military. Hikita published other works with Rikugun Bunko in the 1880s, including a history of Cambodia, a work on the geography of Afghanistan, and a French-Japanese dictionary of military terminology. Although the work itself may have been a translation, the maps are purely Japanese, incorporating terminology a Chinese map would not (such as 支那), and are in a style typical of the late nineteenth century, so must have been new additions to the text. The main text, which may or may not include the appendix maps, is held by the National Diet Library, the Tokyo National Museum, the Japanese National Institute for the Humanities, the National Archives of Japan, the Library of Congress, Columbia University, and Australian National University. There are catalog listings for this particular appendix map with the National Diet Library and the Tokyo National Museum. Scarce to the market.