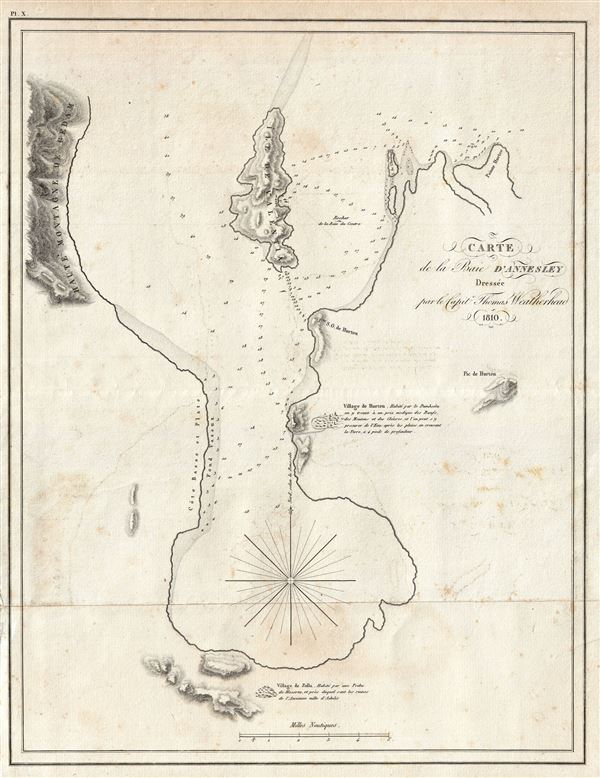 A scarce and important 1810 Henry Salt nautical chart or maritime map of Annesley Bay (Gulf of Zula, Bay of Arafali), Eritrea, Africa. The bay is located about 30 miles south of the modern day Eritrean city of Massawa. The map covers the bay in some detail as well as the surrounding shores, villages, and topography. Salt visited Annesley Bay while on a diplomatic mission to Ethiopia to pursue his personal quest for the lost city of Adulis, something of an obsession he shared with his patron Arthur Annesley, the Viscount Valentia, for whom he renamed the bay. Adulis was the primary port for the Axumite Kingdom (c. 100–940 AD), a once powerful empire centered around the modern day Ethiopian city of Axum. Annesley and Salt would have been aware of Adulis from their classical studies as it features prominently in many ancient Red Sea periploi. The exact location of the city was lost in the Middle Ages. Salt was exceptionally astute in recognizing that the term 'Azoole,' used by Red Sea islanders to refer to the Annesley Bay region, was most likely a derivation of 'Adulis.' Today Salt is credited with discovering Adulis; nevertheless, although he correctly identified the general region where it must have been situated, the lost city itself consistently eluded him. In the end, Salt abandoned his search believing that the ancient city must lie inaccessible beneath the bay. It was not until some thirty years later that a French mission under Vignaud and Petit actually discovered the ruined city on the western shore of the bay, a curiously blank region Salt has here labeled 'Cote basse et Plate.' This map was drawn by Henry Salt and Captain Thomas Weatherhead. The present example was prepared to illustrate the 1816 French edition of Salt's Voyage to Abyssinia.

Henry Salt (June 14, 1780 - October 30, 1827) was a British artist, traveler, diplomat, and Egyptologist active in the first decades of the 19th century. Salt was trained as an artist and traveled extensively in Asia as secretary and draughtsman to George Annesley, the Veiscount Valentia. His first expedition, which lasted from about 1802 to 1806 involved travels to Cape Colony, the east coast of Africa, the Ethiopian Highlands, and India. His paintings from the expedition were published in Annelsey's 1809 Voyages and Travels to India. Afterwards Salt returned to Africa on a government sponsored mission to Ethiopia in the hopes of establishing diplomatic and trade relationships with the Tigrayan warlord Ras Wolde-Sillasie. Salt published the narrative of this expedition in his 1814 book A Voyage to Abyssinia, which also featured a collection of important maps. Today Salt is best known as an Egyptologist and collector of antiquities. In 1815 he was appointed British Consul-General in Cairo, where he dedicated himself to building a vast collection of Egyptian antiquities. Around this time, the ancient monuments and tombs of Egypt were a free-for-all for enterprising Europeans with a penchant for antiquities. Salt and other European adventurers, among them Italian Bernardino Drovetti, had hard reputations and were willing to stop at nothing to obtain choice pieces. Among Salt's top acquisitions are the head of Ramses II and the sarcophagus of Ramses III, located at the British Museum and the Louvre, respectively. Salt built three massive collections, each containing thousands of artifacts. Most of these pieces were acquired by the British Museum, where they rest to this day, though some did find they were to other institutions, such as the Louvre, and into various private collections. Learn More...