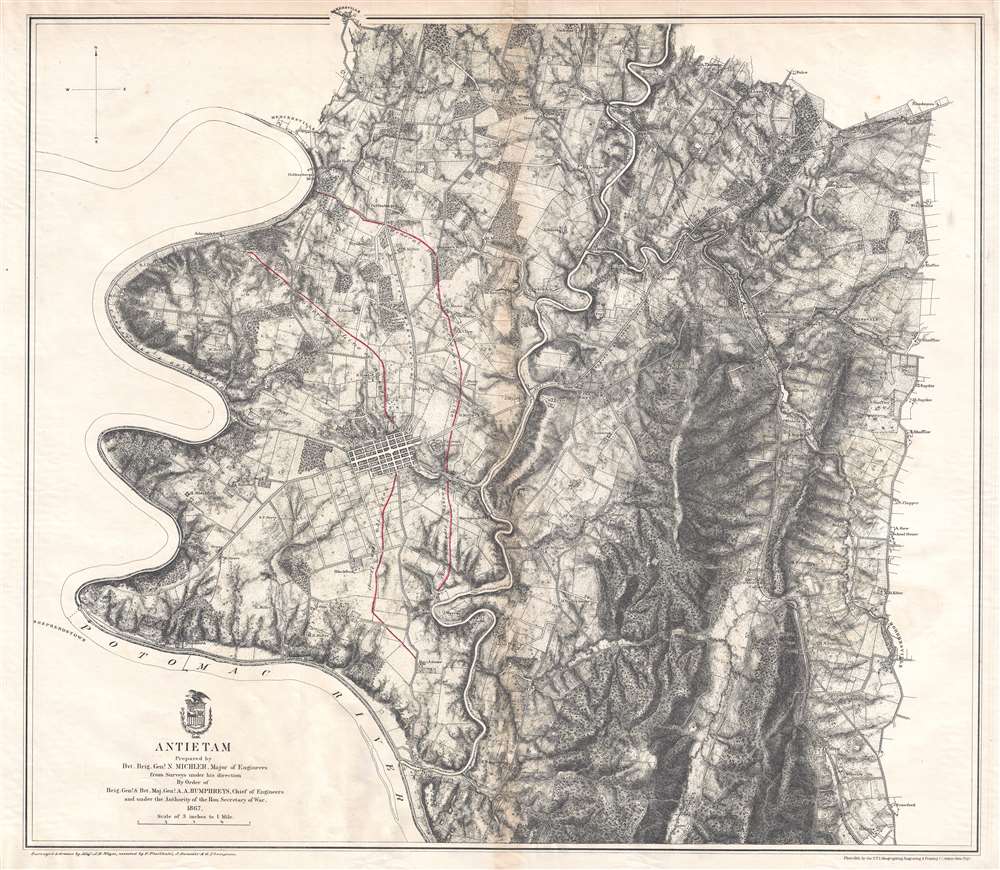 Depicts in detail the battlefield of the Battle of Antietam - the bloodiest day in U.S. history.

This is an 1867 John Weyss and Nathaniel Michler map of the battlefield of Antietam in Maryland. The map depicts the region from the Potomac River to Rohrersville and from Bakersville to just south of the Antietam Iron Works situated at the confluence of Antietam Creek and the Potomac River.

The Battle of Antietam

The single bloodiest day in U.S. history, the battle of Antietam claimed a combined total of 22,717 killed, wounded, or missing and has the distinction of being the first field army level engagement in the Eastern Theater of the Civil War to take place on Union soil. The battle was fought between Confederate General Robert E. Lee's Army of Northern Virginia and Union General George B. McClellan's Army of the Potomac near Sharpsburg, Maryland and Antietam Creek. The battle is referred to by both names, although the Battle of Sharpsburg is used primarily in the southern United States. Who emerged victorious from the Battle of Antietam is a difficult question, since both sides suffered huge numbers of casualties and each side had something to celebrate. The Union Army successfully stopped the Confederate invasion of Maryland but was unable to capitalize on any advantage won during the battle to completely defeat Lee's army. As such, Lee was able to retreat with his army back across the Potomac and live to fight another day. Historians deem this to be a strategic victory for the Union. Perhaps the most significant outcome of the battle, however, was Lincoln's decision to follow the victory by announcing the Emancipation Proclamation, which prevented both England and France from pursuing any plans to officially recognize the Confederacy.

A highly detailed survey of the region, much of the map minimizes the events of the battle itself in order to provide a more thorough understanding of the terrain. Confederate lines of battle from September 16th, 1862 and the evening of September 17, 1862 are illustrated in red ink on the left side, but Union positions are not shown. The only other notation referring to the war is the National Cemetery outside Sharpsburg, which today is known as Antietam National Cemetery. The cemetery was commissioned in 1865 and internments began in 1867. The only Civil War era soldiers buried at Antietam were Union soldiers, Confederate dead were buried at three other cemeteries around Maryland. The cemetery also contains the graves of veterans from the Spanish-American War, both World Wars, and the Korean War. Sharpsburg is by far the largest community in the area, with several small hamlets noted to the north. Numerous homesteads are also marked throughout. Roads, including the Sharpsburg and Boonsboro Turnpike, are noted, as is the Chesapeake and Ohio Canal which runs along the Potomac River.

This map was surveyed and drawn by Major John E. Weyss under the command of Nathaniel Michler engraved by Julius Bien, and published by the War Department in Military Maps illustrating the Operations of the Armies of the Potomac and James in 1869. While this map is well represented in institutional collections, it is rarely on the private market.