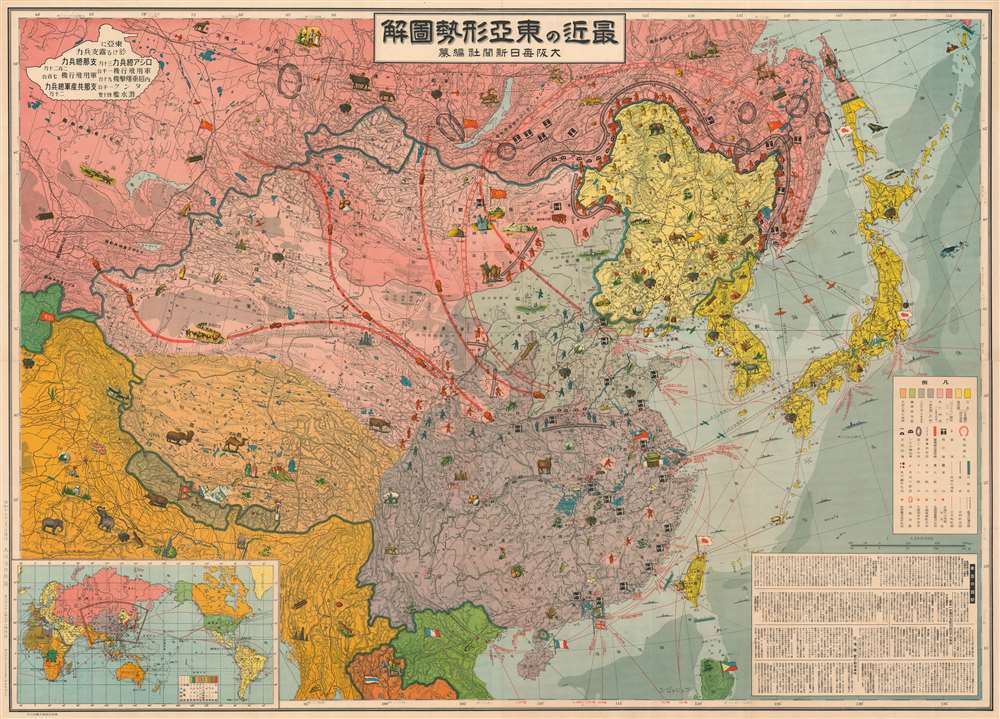 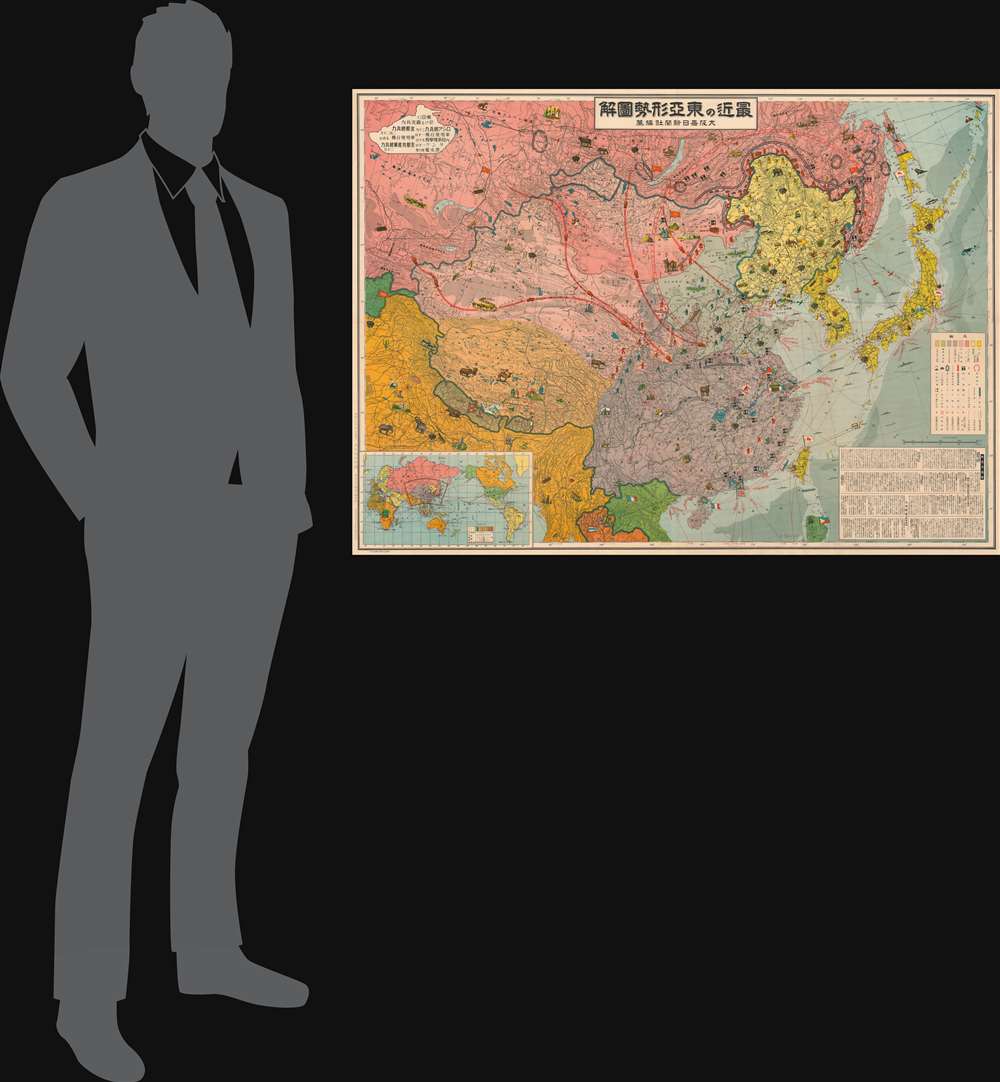 A remarkable 1937 Osaka Mainichi Shimbun large-format Japanese anti-Soviet propaganda pictorial map of East Asia. Centered on China, this stunning map depicts from Central Asia and India to Japan, and from Siberia to Vietnam. The map employs text, color coding, and cartoon imagery to illustrate the confusing political, military, and economic environment in East Asia at this time, expressing the dangers of Soviet expansionism, and suggesting a Japanese military buildup to counter it.

There is so much going on here it is hard to know where to start, but we will begin with the color coding and general message of the map. The three main players are Russia or the Soviet Union (Red), Japan (Yellow), and China (Purple). Lighter red zones are those areas under Communist / Soviet influence, including Mongolia and Qinghai. Regions under Japanese influence, such as Manchuria, are lighter yellow. China (Purple) is the region of contention, with areas Chinese control, such as the five northern Chinese provinces, in light blue. British India and Burma appear in Dark Yellow, while areas of China under British influence, including Tibet, are shaded Peach.

Representing the Chinese Civil War and a Potential Russian Invasion

Notations within China highlight the Chinese Civil War (1927 - 1950) between the Kuomintang government forces (represented as blue soldiers) and the Communist forces (represented as little red soldiers within China). Note how the Communist forces occupy the Chinese heartland while the blue Kuomintang forces are concentrated on the borders to counter Russian advances. Russian forces, meanwhile, gather on the borders of Manchuria, where Japanese forces, in lesser numbers, maintain a tenuous line of defense. Red lines outline the Soviet strategy for northern China and Manchuria, which involves a horseshoe form, with land forces entering northern China via Mongolia, other armies bottling up the Japanese in Manchuria, and a potential air attack against the Japanese mainland via the Russian base of Vladivostok.

A Region Rich in Natural Resources

The map further makes some effort to illustrate the wealth of resources throughout the region via a series of pictorial vignettes illustrating everything from oil rigs, to coal mines, to livestock, to gold and copper deposits. Among the resources are hemp plants illustrated in Manchuria, China, and northern Luzon, although to be fair, at the time cannabis was more valuable for making ropes and clothing than as a drug. Apart from livestock, Russian territories are relatively lacking in resources, while Korea, Manchuria, and China are exceptionally rich, highlighting their intrinsic value for whatever power might seize them.

In the lower-left appears a world map on a Japan-centered Mercator projection. The coverage area of the larger map is highlighted in the inset. The color coding reflects colonial powers, such as orange for England, Red for Japan, Brown for Italy, and Light Red for the Soviet Union.

In the upper left corner there is a tank-shaped text block offering a comparative breakdown of Russian versus Chinese military might. As follows: