1855 Spruneri Map of Arabia, Egypt and Ethiopia or Abyssinia 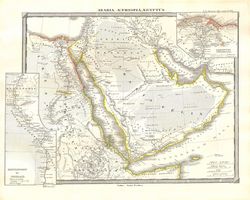 1855 Spruneri Map of Arabia, Egypt and Ethiopia or Abyssinia

This fine hand colored map is a steel plate lithograph depicting Arabia ( Arabian Peninsula ), Egypt and Ethiopia or Abyssinia in ancient times. Includes the ancient, almost mythical, kingdom of Axum in northern Ethiopia – birthplace of the Queen of Sheba and supposed resting place of the Arc of the Covenant to this very day! It was published in 1855 by the legendary German cartographer Justus Perthes. Issued as part of the 'Spruneri Atlas Antiquarie.'