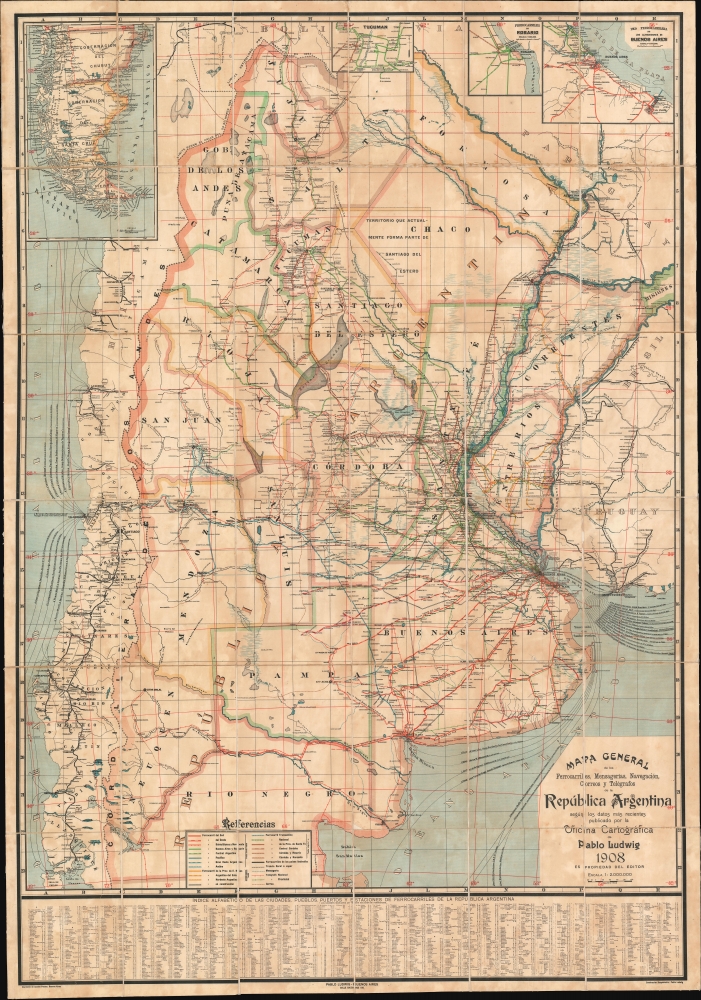 Depicts the transportation network throughout Argentina during an era of rapid economic recovery.
$2,200.00

Capturing a moment in history, this is a 1908 Pablo Ludwig's map of Argentina's railroad system. The map illustrates a period of prosperity and growth in Argentina that led a massive expansion of the national railroad network. Although railroad construction in Argentina began in the 1860s, and saw rapid expansion throughout the late 19th century, Baring Crisis, an acute global recession also known as the Panic of 1890, derailed progress in the late 19th century. Nonetheless, by 1908, when this map was issued, the country was in the midst of yet another boom and tracking increased from roughly 9000 km in 1890 to 29,000 by 1910.

What is on the Map

More than one dozen different combinations of color and pattern differentiate between railroad lines, all of which are labeled. Telegraph lines and mail routes are also noted. Maritime routes from Valparaiso and Montevideo are labeled with their destinations, but only a few routes leave from Buenos Aires, nearly all of which go up the Uruguay and Parana Rivers. Insets of the regions around Buenos Aires, Rosario, and Tucuman are situated along the top border, and an inset detailing southern South America and Tierra del Fuego occupied the upper left corner. An alphabetical index of hundreds of cities, towns, ports, and other locations is included along the bottom border.

This map was created and published by Pablo Ludwig in 1908. We see no examples catalogued in any institutional collection, in dealers' catalogues or auction records: this is the only known surviving example.

Pablo Ludwig (fl. c. 1890 - c. 1920) was cartographe active in Buenos Aires in the late 19th and early 20th centuries. His office, the Oficina Cartográfica de Pablo Ludwig, published maps of Buenos Aires, regional maps of Argentina, and maps of Argentina as a whole. We have been unable to discover anything about his personal life or a detailed history of his firm. Learn More...

Very good condition; dissected and mounted on linen as issued, with original boards present but separate. Some scuffing near fold areas, but overall excellent.
Looking for a high-resolution scan of this?