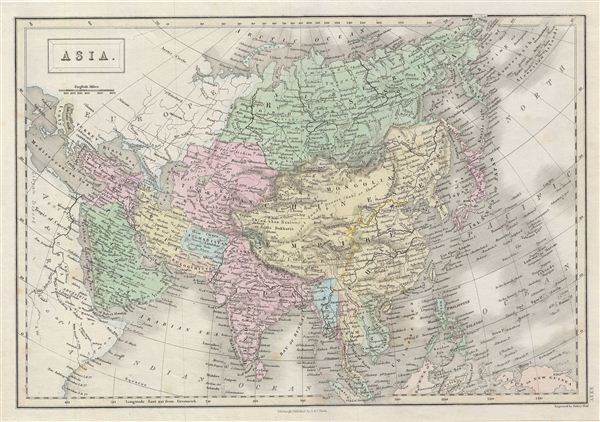 A fine example of Adam and Charles Black's 1851 map of Asia. The map covers the entire Asian continent from the Arctic Ocean to the Indian Ocean and from the Mediterranean Sea to the North Pacific Ocean. The map covers Turkey, Arabia, Persia, the Indian subcontinent, Russia, the Chinese empire, Japan and parts of Southeast Asia. It further includes Tibet, Korea and Ladakh within the borders of the Chinese empire. Both the Great Wall and Gobi Desert are identified. Afghanistan is divided into Cabool and the southern province of Beloochistan (Baluchistan).

As this map was drawn, Imperial China wilted under the weak Qing while the Russian attained the height of its pan-continental expansion. Turkey and much of the Middle east were under Ottoman hegemony. In India, shortly after this map was made, the sepoys of the British east Indian Company would revolt in India's First War of Independence. The First War of Independence led to the collapse of the British east India Company and the consolidation of India under the suzerainty of the British Raj.

Throughout, the map identifies various cities, towns, rivers, mountain passes and an assortment of additional topographical details. Map is hand colored in pink, green, blue and yellow pastels to define boundaries. The map is engraved by Sidney Hall and issued as plate no. 35 in the 1851 edition of Black's General Atlas.