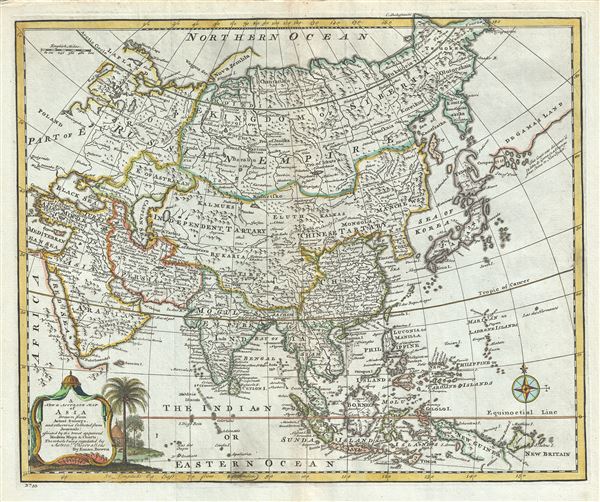 This is an extremely attractive 1747 decorative map of Asia by the English cartographer Emmanuel Bowen. This map covers the entire continent from Africa and the Mediterranean east to the Bering Sea and south as far as Java and New Guinea. The map renders the entire region in extraordinary detail offering both topographical and political information with forests and mountains beautifully rendered in profile. Bowen's presentation is most interesting in its rendering of the largely unexplored extreme northeast of Asia. Knowledge of this area was, at the time, speculative at best. Hokkaido, or as it is mapped here, Eso or Yesso, is joined to Sakhalin, reflecting a common misunderstanding about this region that persisted until the late 18th century.

Just to the east of Yesdo (Hokkaido), Bowen maps the apocryphal De Gama's Land and Company's Land with a note reading 'This coast was discovered by John de Gama in a voyage from China to New Spain.' Often called Terre de Gama or Terre de la Company, these islands were supposedly discovered in the 17th century by a mysterious Spanish navigator known as Jean de Gama. Various subsequent navigators claim to have seen this land, including Maerten de Vries and Cornelis Jansz Coen, but it was left to Bering to finally debunk the myth. In 1729, he sailed for three days looking for Juan de Gama land but never found it. Thought it may be little more than a mis-mapping of Hokkaido or the Japanese Kuriles, Gama or Compagnie remained on maps for about 50 years following Bering's voyages until the explorations of Cook confirmed the Bering findings.

The mapping of Hokkaido (here identified as Yesdo) joined to Sakhalin refers to cartography of Maerten de Vries and Cornelis Jansz Coen, who explored this land in 1643 in search of the gold and silver rich islands mentioned in a Spanish legend. Vries and Coen were the first Europeans to enter these waters, which were in fact little known even to the Japanese. They mapped the Strait of Vries, identified here. They believed this strait to separate Asia from America, which Compagnies Land formed part of, thus elucidating its magnificent proportions. They were also the first European navigators to discover Sakhalin and map its southern coastline. Apparently the Castricum was mired in a heavy fog as it attempted to explore these seas and thus Vries and Coen failed to notice the strait separating Edo (Hokkaido) from Sakhalin, initiating a cartographic error that would persist well into the 18th century. Despite their many successes, the expedition ultimately failed to discover islands of silver and gold, thus proving definitively to Van Diemen that indeed, no such lands ever existed.

Korea or Corea is present, if misshapen, in roughly the correct location. The sea between Japan and Korea, whose name, the 'Sea of Korea,' 'East Sea,' or the 'Sea of Japan,' is here identified in favor of Korea (Sea of Korea). Historically, Korea has used the term 'East Sea' since 59 B.C., and many books published before the Japanese annexed Korea make references to the 'East Sea' or 'Sea of Korea.' Over time, neighboring and western countries have identified Korea's East Sea using various different terms. The St. Petersburg Academy of Sciences referred to the East Sea as 'Koreiskoe Mope' or 'Sea of Korea' in their 1745 map of Asia. Other seventeenth and 18th century Russian maps alternate between 'Sea of Korea' and 'Eastern Ocean.' The 18th century Russian and French explorers Adam Johan von Krusenstern and La Perouse called it the 'Sea of Japan,' a term that became popular worldwide. Nonetheless, the last official map published by the Russians name the East Sea the 'Sea of Korea.' The name is currently still a matter of historical and political dispute between the countries.

A beautiful title cartouche is included in the lower left quadrant. This map was prepared by Emanuel Bowen as plate no. 33 for the 1747 issue of A Complete System of Geography.