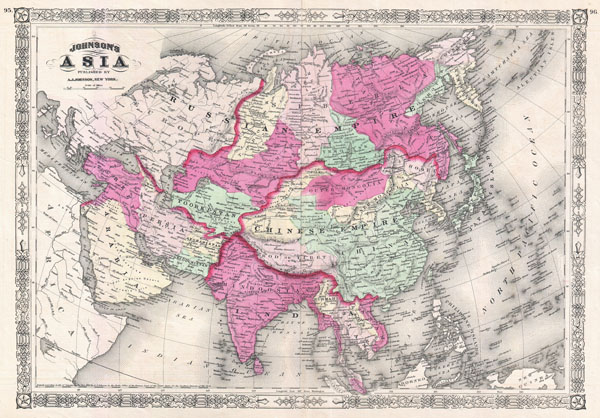 This is A. J. Johnson and Ward's 1867 map of Asia. Covers the continent in considerable detail with regional color coding. Includes parts of Africa, Europe and Polynesia. In 1867 Johnson did a major re-engraving of many of his maps, including this large double page preparation of a previously single page map. Features the fretwork border common to Johnson's atlas work from 1864 to 1869. Steel plate engraving prepared by A. J. Johnson for publication as page nos. 95-96 in the 1867 edition of his New Illustrated Atlas… Dated and copyrighted, 'Entered according to Act of Congress in the Year of 1867, by A. J. Johnson in the Clerks Office of the District Court of the United States for the Southern District of New York.'

Very good condition. Text on verso. Minor verso reinforcement along original centerfold.
Looking for a high-resolution scan of this?