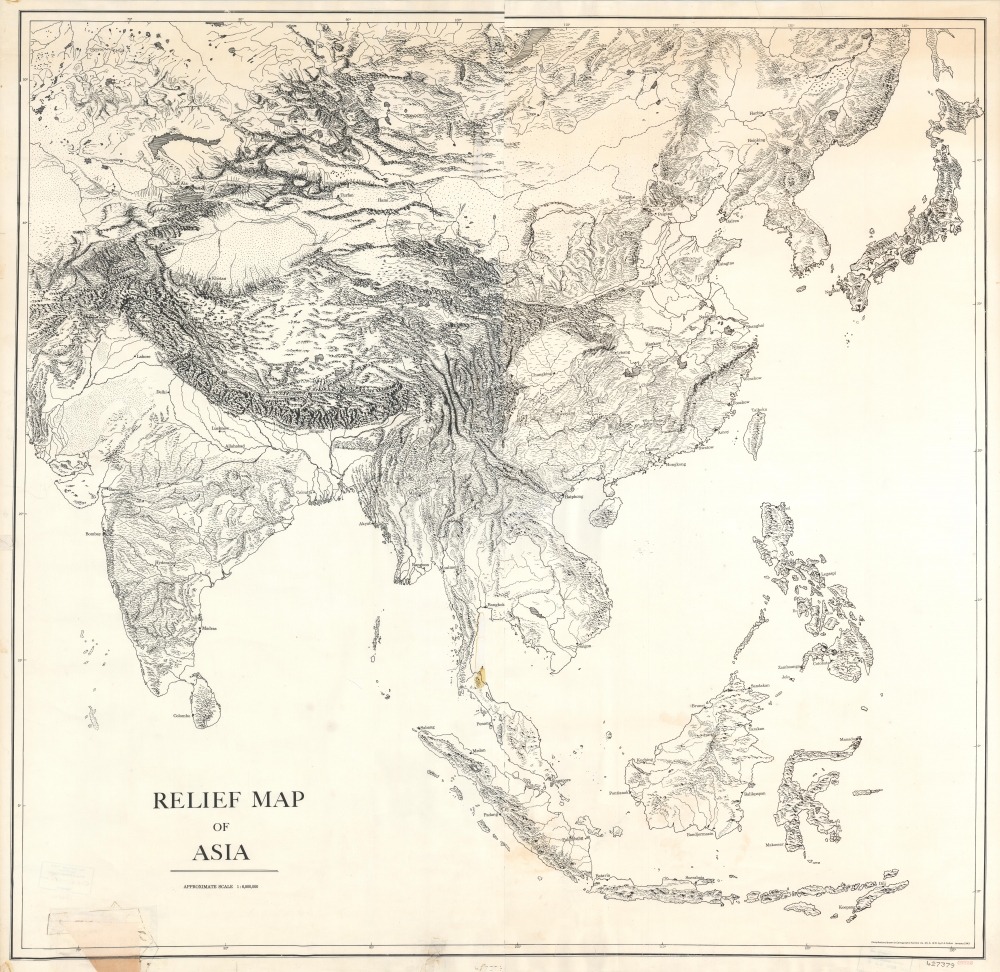 Created and owned by the Office of Strategic Services - the predecessor of the CIA
$1,000.00

This is a 1942 Office of Strategic Services Map Information Section skeleton map of Asia and bears Office of Strategic Services catalog stamps in two places. A great example of a skeleton map, very little detail is present. Major cities, including Karachi, Bangkok, Saigon, Rangoon, Tokyo, Seoul, Vladivostok, Manila, Hong Kong, and Beijing, are labeled. Mountain ranges, rivers, and lakes are illustrated, but none are labeled. The lack of detail allows for the map's use in operational planning, for example, and its easy modification by hand.

The Office of Strategic Services and its Map Division

The Office of Strategic Services (OSS) did not exist for very long, operating from 1941 until 1945. In those four years, however, OSS laid the foundation for American intelligence gathering and the intelligence community as a whole. As one of its many responsibilities, the Map Division was tasked with creating maps for innumerable different uses. It was comprised of four sub-sections: Cartography, Map Intelligence (MAPIS), Topographic Models, and Specialty Photography. Operating under the Joint Chiefs of Staff, the Map Division produced a wide range of materials for operations planning. The Division performed its own research and map production. It created, for example, the maps used at the conferences between Roosevelt, Stalin, and Churchill, as well as those used for the D-Day invasion practices in California and Shrivenham, in the United Kingdom. The Map Division also created thematic maps, a relative rarity at this point in cartographic history, including maps of the resource capabilities of the Axis powers, such as Germany's oil production capabilities. Arthur Robinson (1915 - 2004), the Chief of the Map Division, estimated that the Cartographic subdivision produced 8,200 maps. That subdivision alone had a staff of fifty-three. While the principal office of the Map Division was in Washington, D.C., it also operated 'outposts' in Bern, Sri Lanka, Kunming, Chung King, New Delhi, and London. The Map Division also acted as a repository for captured maps, processing over 200,000 maps on microfilm or paper copies a month. One example was the collection taken from map publisher Justus-Perthes, in Gotha, Germany, late in the war. Over nine tons of material were sent priority to Washington for cataloging. By the end of the war, the OSS claimed it possessed the most extensive map intelligence library in the world.

This map was drawn by C.A. Colton of the Cartographic Section of the Map Division of the Office of Strategic Services and published in January 1943. This is the only known surviving example.

Very good. Mounted on linen. Very small areas of loss near join at center. Area of infill along bottom border. Exhibits very light soiling.
Looking for a high-resolution scan of this?