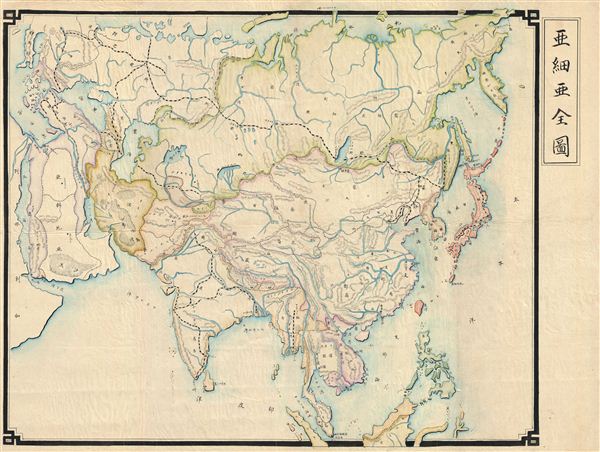 A beautiful Japanese hand drawn or manuscript map of Asia drawn in the Meiji period, c. 1890. The map covers the whole of Asia from Italy and Arabia to Japan and from the Arctic to Singapore and the east Indies. Based on the development of the rail system, especially the Trans-Siberian Railroad, we are able to approximately date this to the Meiji Period. The document has been masterfully illustrated on fine Japanese tissue with regions, cities, rivers, and oceans identified in Japanese. The disputed body of water between Japan and Korea - either the Sea of Japan, Sea of Korea, or east Sea, depending on which country has mapped it, is here identified in favor of Japan. The Great Wall of China is clearly presented and topography as rendered in crude hachure. The map is significantly larger than an initial appraisal might suggest measuring a full 21.5 x 28 inches.

Very good. Some wear on original fold lines, especially at fold intersections.
Looking for a high-resolution scan of this?