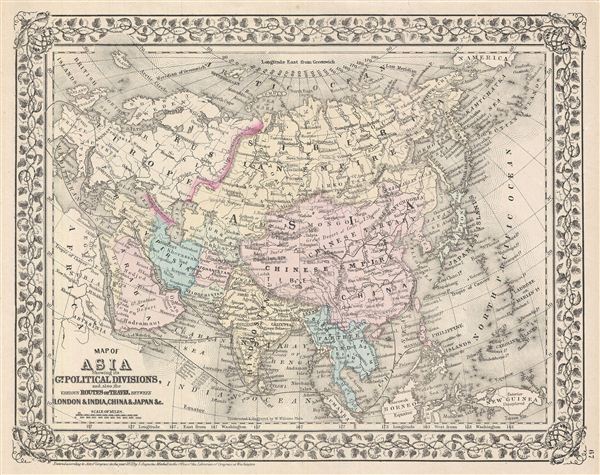 A beautiful example of the legendary American map publisher Samuel Augustus Mitchell Jr.'s 1872 map of Asia. This map covers from the Arabian Peninsula and Turkey eastward as far as Kamchatka, Japan, the Philippines and New Guinea. It includes the empires if Hindoostan (India), China (includes Tibet), Toorkistan, Persia (Iran), Cabool, Beloochistan (Afghanistan), Birma (Burma), Siam (Thailand), Anam (Vietnam), Malaysia, Japan, etc. Also included are adjacent portions of Africa, europe and Polynesia. The map makes note of the steamship routes and mileages from London to various destinations in Asia. Tibet, Korea and Ladak are included within the borders of the Chinese empire. Identifies both the Great Wall in China. The disputed body of water between Korea and Japan is here identified as the Japan Sea. Also shows the uninhabited island of Nova Zembla in the Arctic Ocean. Taiwan or Formosa is mapped vaguely, representing the poor knowledge of the region prior to the Japanese invasion and subsequent survey work in 1895. Afghanistan is divided into Cabool and the southern province of Beloochistan (Baluchistan).

As this map was drawn, Imperial China wilted under the weak Qing Dynasty while the Russian empire attained the height of its pan-continental expansion. Turkey and the Middle east were under Ottoman rule while the British Raj governed of India.

This map also identifies various cities, towns, rivers and an assortment of additional topographical details. Map is color coded according to political boundaries with elevation rendered by hachure. One of the most attractive American atlas maps of this region to appear in the mid-19th century. Features the vine motif border typical of Mitchell maps from the 1866 - 1882 period. Prepared by S.A. Mitchell for inclusion as plate nos. 67 in the 1872 issue of Mitchell's New General Atlas. Dated and copyrighted, 'entered according to Act of Congress in the Year 1872 by S. Augustus Mitchell in the Office of the Librarian of Congress at Washington.'