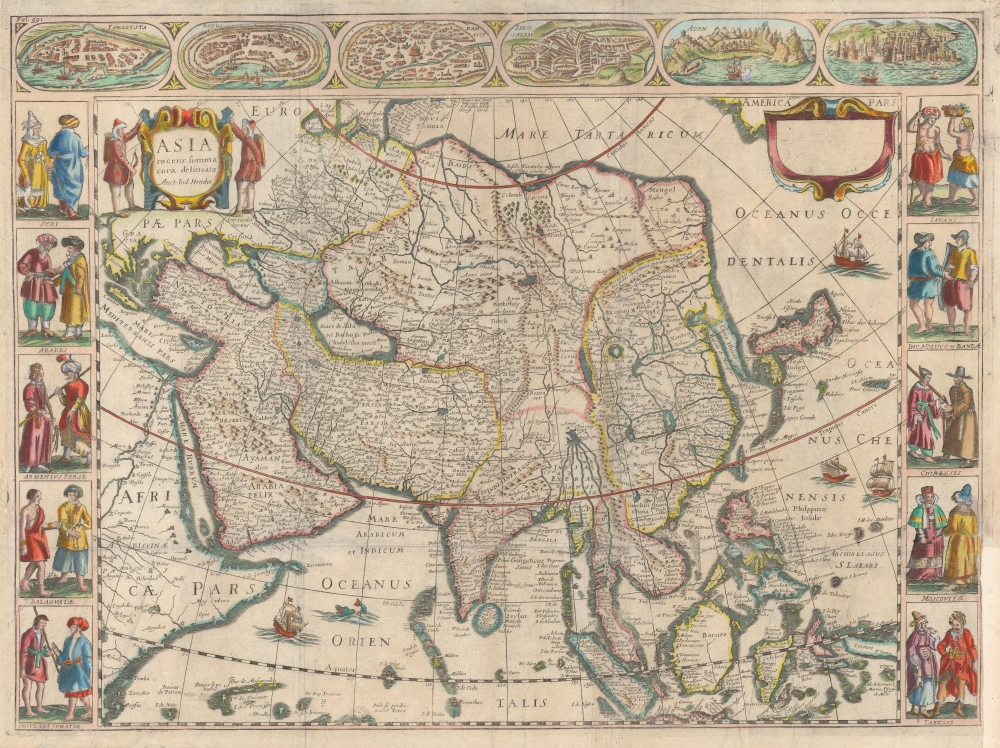 This is a beautiful Nicolas Picart edition of the Hondius carte-á-figures map of Asia - the standard for the mapping of that continent. It was composed by Jodocus Hondius as early as 1623, and first appeared in the 1630 Hondius atlas. In this case, the map is an entirely new plate engraved in Paris in 1644 by Nicolas Picart. These French editions are beautiful and desirable rarities.

Hondius' 1623 map embraces all of Asia, including Japan and the Spice Islands, and a portion of the American northern Pacific coast. It features the hallmarks of Dutch Golden Age mapmaking, including decorative, figured borders. Hondius' map stands out from competing maps by Blaeu, by its presentation of Korea as a peninsula - at the time, most cartographers believed it to be an island. Hondius also portrays the passage between Asia and America as much broader than his competitors. When the present map was engraved, in 1644, Paris had not yet emerged as the geographical powerhouse that it would in the 1650s under Nicolas Sanson, and Dutch maps remained the standard. With respect to this map, the geography did not significantly advance until the issue of Nicolas Witsen's 1687 map of Tartaria. Picart's use of the Hondius map of 1623 for his model was the best choice he could have made.

Picart adopted not only the geographical forms of Hondius, but also the decorative elements. These were not merely aesthetic embellishments, rather they were intended to satisfy readers' curiosity. Hondius' original initially featured city plans in both the upper and lower borders, but by the time it was added to his atlas in 1630, the lower border was excised as a space-saving choice. Thus, Picart copied only the upper border, featuring city views of Famagusta (in Cyprus,) Rhodes, Damascus, Jerusalem, Aden, and Hormuz. The French map preserves both the left and right figured borders of the original, depicting the denizens of Syria, Arabia, Armenia, Sumatra, Java, China, and Muscovy.

This plate was engraved in Paris by Nicolas Picart in 1644. That first edition included Picart's imprint and the date in the upper right cartouche. The inclusion of Hondius' imprint in the upper left was not an attempt to deceive, but an instance of credit where it was due. The present example is a second state, for inclusion in Pierre d'Avity's 1659 Les Estats, Empires, Royaumes, et Principautez du Monde, printed in Lyon. This state is characterized by the presence of the text 'Fol. 591' in the upper left border, and the removal of Picart's imprint and date in the upper right cartouche. The plate exhibits significant reworking with additional shading hachure added to the figures. OCLC notes only two examples of this map in institutional collections; only one of these is of the second state, appearing in the collection of Middlebury College. A sole first-state example is listed by the Bibliothèque nationale de France.

Jodocus Hondius II (1594 – 1629) was a Dutch engraver, cartographer and publisher. The elder son of the cartographer Jodocus Hondius, Jodocus took over the business after father died in 1612, co-running the business with his brother Henricus II. He was an accomplished engraver, to the extent that upon his death Willem Blaeu would purchase thirty-four of Hondius' plates to be included in his new atlases. Learn More...


Nicolas Picart (fl. 1640-1660) was a French engraver active in Paris in the middle of the seventeenth century. Nothing is known of his early life or training. In addition to a quartet of continental maps after Hondius, (1644) he published editions of Boisseau'sTrésor des cartes géographiques between 1651 and 1662. Learn More...