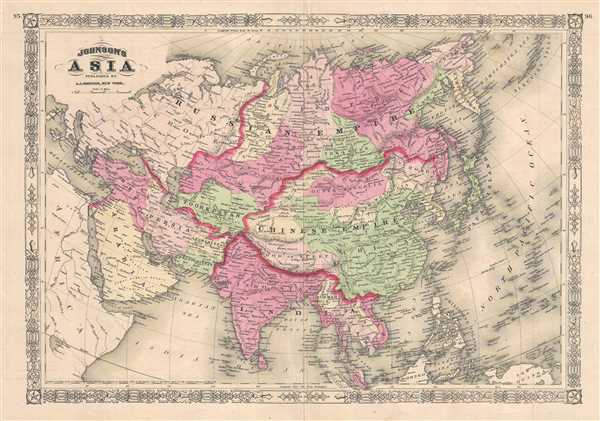 This is A. J. Johnson and Ward's 1867 map of Asia. The map depicts the region from central Europe to the Pacific Ocean and the Aleutian Islands and from the Arctic Ocean to Borneo and New Guinea. In 1867, Johnson did a major re-engraving of many of his maps, including this large double page preparation of what was previously a single page map. Countries throughout Asia are illustrated and labeled, including the Russian Empire, the Chinese Empire, and India (Hindoostan). Myriad cities and towns are labeled, including Beijing (Peking), Nanjing (Nanking), Tokyo (Yedo), Guangzhou (Canton), Hong Kong, Macau, Lhasa (Lassa), Delhi, Tehran, Kandahar, and Istanbul (Constantinople). Numerous rivers snake across the continent and most are labeled, including the Ganges, Yangtze, Tigris, and Euphrates. The whole is surrounded by the fretwork border common to Johnson's atlas work from 1864 to 1869.

This map is a steel plate engraving prepared by A. J. Johnson for publication as page nos. 95-96 in the 1867 edition of his New Illustrated Atlas… Dated and copyrighted, 'Entered according to Act of Congress in the Year of 1867, by A. J. Johnson in the Clerk's Office of the District Court of the United States for the Southern District of New York.'