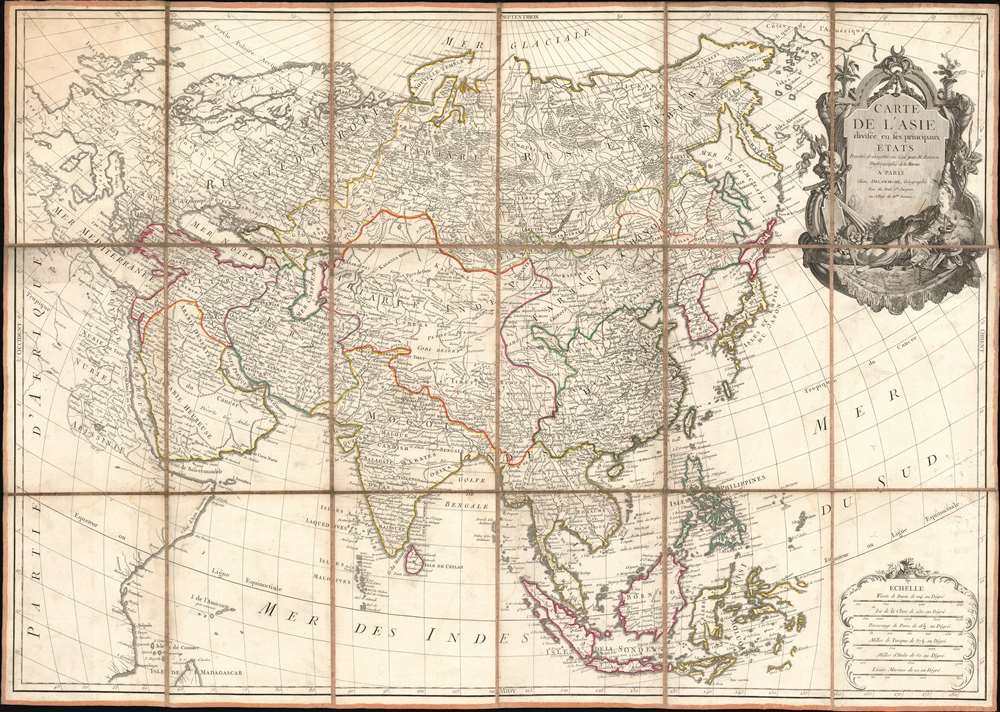 Striking map of Asia offering the best cartography of the period.
$2,950.00

An exceptional large-format separate-issue map of Asia issued by Rigobert Bonne and Charles-François Delamarche, c. 1779. The map compiles much of the best cartography available at the time, covering from the Mediterranean to the Bering Strait, and from the Arctic Ocean to Java and Timor. Much of the source cartography can be traced to J. B. B. D'Anville - note the distinctive square shape of Korea - but Bonne's considerable revision has brought it up to date to about 1779. Particularly striking is the large ornamental title cartouche appearing in the upper right illustrating the wealth, indolence, and decadence stereotypically attributed to Asia by orientalists of the late 19th century.

There is a manuscript note identifying the Bering Strait (Detroit de Behring) and Cape Est, suggesting interest in the region by an early owner. Further south, Aleutian Islands (as well as the Isle St. Andre), are named, but placed haphazardly, suggesting a pre-Cook analysis. Of the islands here noted, some are recognizable, particularly S. Diomede, today's Diomede Islands, named by Vitus Bering in 1728.

The cartography is attributed to Rigobert Bonne. The present example was published by Charles-François Delamarche. The Boston Public Library owns an edition published by Jean Lattré and dated to 1779. It is hard to know which came first, or if they were published simultaneously, as the map appeared during a general overlap in their careers. Both examples exhibit signs of re-engraving in the title cartouche, so it is possible that there exists an earlier, now lost, precursor. Examples are scarce. Aside from the known Lattré example at the Boston Public Library, examples that 'might' be this map are cataloged at Cornell and at the British Library. Unfortunately, they are not imaged and the common-place title was widely used by the same cartographers for lesser atlas maps.

Boston Public Library, Leventhal Center, G1015 .A85 1783.
Looking for a high-resolution scan of this?