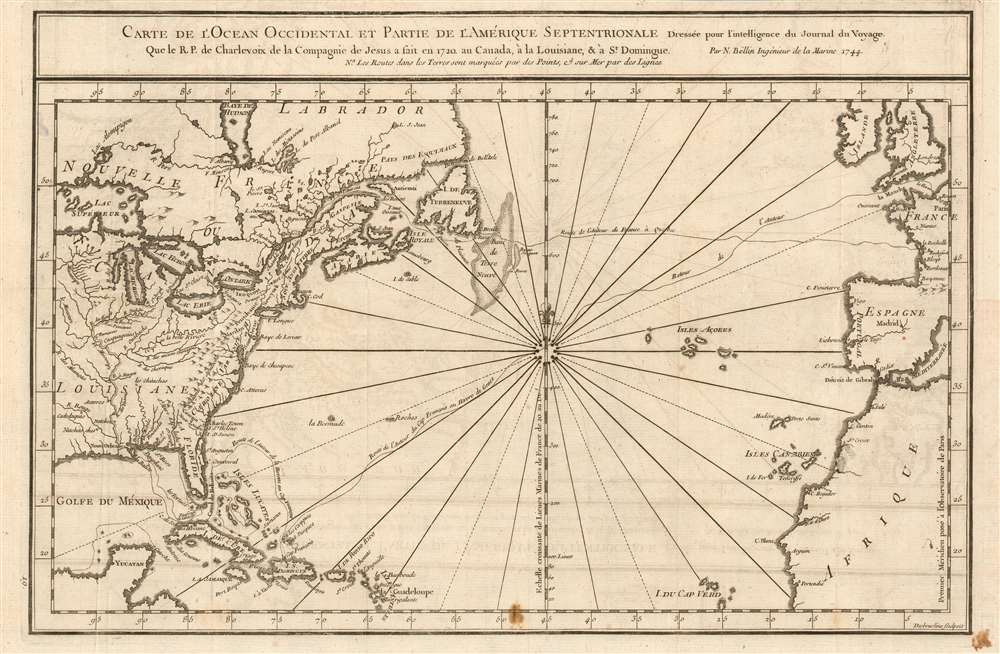 Elegant Map of the Atlantic, Showing Charlevoix' Voyage to and from North America.

This is a 1744 Bellin map of the colonized regions of North America and the Caribbean Islands shown in relation to the coasts of Europe and Africa. It appeared in Pierre Francois Xavier de Charlevoix's 1744 Histoire et description generale de la Nouvelle France, one of the most comprehensive works on North America predating the French and Indian War. Charlevoix was a Jesuit missionary and traveler commissioned by the French Crown and the Duke of Orleans to explore French holdings in the Americas, particularly with a view towards finding a profitable route to the Pacific. Many hoped this in the network of rivers and lakes to the west of the Great Lakes, as suggested by earlier explorers and mapmakers such as Lahontan and De l'Isle.

The map, as broad as it is, is intended to show the track of Charlevoix's voyages to and from North America. It shows his track from Rochefort to Newfoundland and then up the Saint Lawrence River, to Quebec City. His track then runs through Lakes Ontario, Erie, Huron, and Michigan before following the Illinois River to the Mississippi. It shows the author's shipwreck en route to Cuba from New Orleans, and then his successful attempt - reaching Cap Francois on Santo Domingo before re-crossing the Atlantic, reaching France at Le Havre.

What About Lake Superior?

The punctilious among our readers may note that the northernmost Great Lake appears to be left from Charlevoix's track: an interesting but perhaps unsurprising omission, given that one of Charlevoix's best-known contributions to cartography is his distinctive and spurious cartography of Lake Superior, with its four imaginary islands. These, though unnamed, do appear on this map, despite the author having not gone anywhere near them.