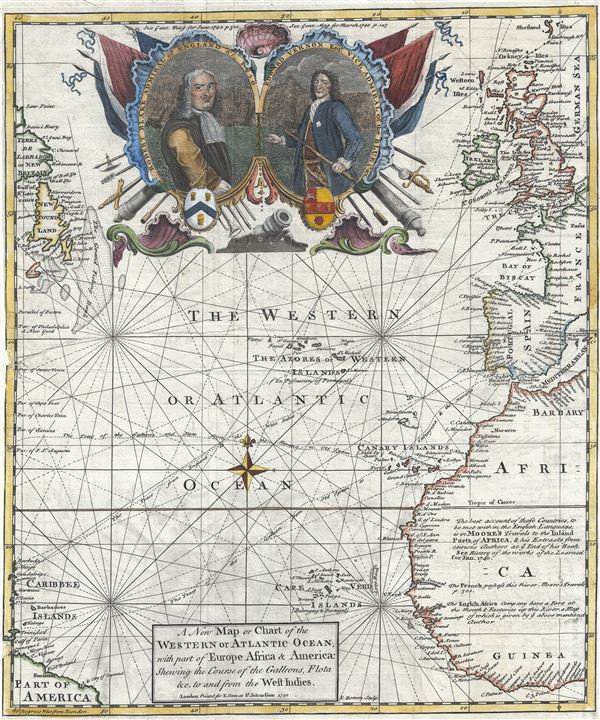 Illustrates the Atlatic Slave trade during the War of Jenkins' Ear.

A fascinating map of the Atlantic Ocean engraved by Emmanuel Bowen in June, 1740 for issue in the June edition of Gentleman's Magazine. Centered on the Azores, this map covers from Labrador and Newfoundland eastward to including all of England and Ireland, Spain, and much of western Africa. It extends southwards to northeastern South America. The map includes the Cape Verde Island, the Azores, the Canary Islands, and the Grand Banks. Trans-Atlantic trade routes, including the galleon toute from Cartagena and Havana, and the route from England to the West Indies, among others, are noted.

This map was issued during the War of Jenkins' Ear, or as it is known in Spain the Guerra del Asiento. The Asiento was a lucrative c. 1713 trade agreement between Spain and Great Britain that allowed the British to sell slaves in Spain's New World colonies. The Spanish had begun to resent the British slave trade, which they rightly perceived as a gateway to piracy and smuggling, and regularly harassed British traders -leading to the War of Jenkins' Ear, a conflict intended to prevent Spain from reneging on the Asiento. Consequently, this map covers much of English West Africa, including its slave trading forts in the Gambia and elsewhere.

The map's most prominent feature is the dramatic illustration, at top center, of two British Admirals, Robert Blank and Edward Vernon. Both were considered heroes in Great Britain and had emerged victorious from naval engagements with Spanish forces. As colonists, themselves dependent on the slave trade, many American colonials took part in the war. Among them was, incidentally, a young Lawrence Washington. Lawrence was so impressed with the naval acuity and brilliant strategies of Admiral Vernon, pictured top right, that he named his Virginia ancestral home Mount Vernon. Lawrence died without heirs passing his estate to his half-brother, George Washington.

Very good. Margins narrow as in all examples. Blank on verso.

Jolly, D. C., Maps in British Periodicals, GENT-14.
Looking for a high-resolution scan of this?