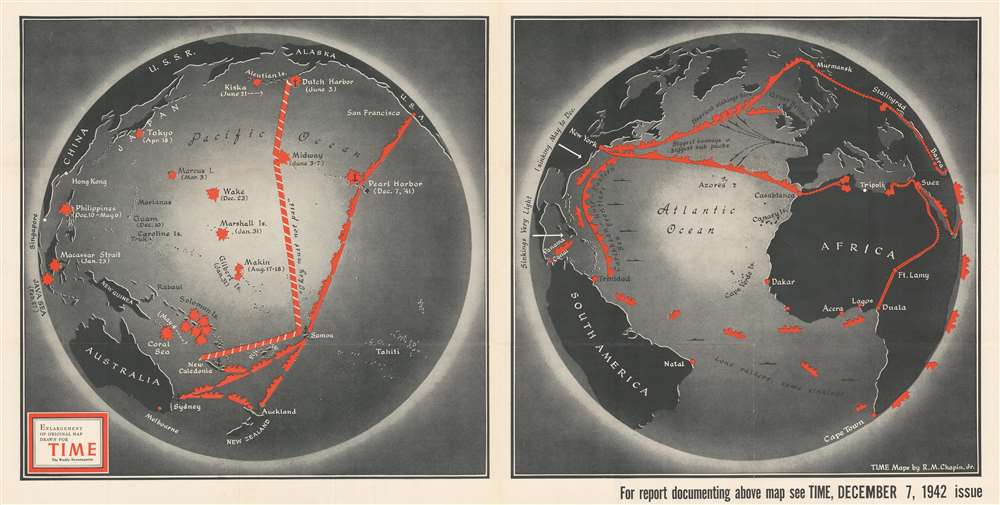 This is a separately issued large-format 1942 Robert M. Chapin, Jr. map of the Pacific and Atlantic Oceans during World War II. Chapin presents the war situation in each of the world's major oceans from an American perspective for TIME Magazine's readers. Both maps emphasize wartime strategies, realities, and conditions specific to each ocean.

The Situation in the Pacific

On the map of the Pacific, situated on the left of the sheet, two lines stretch between the United States and the South Pacific. These lines represent two critical aspects of the Pacific War. The left line, drawn to resemble a barrier, bears the phrase 'They must not pass.' This line mark's the United States' furthest line of defense and stretches from Dutch Harbor to Midway, Samoa, and New Caledonia. The U.S. Navy stated that this line had to be held to protect American bases and supply lines. These efforts had been mostly successful (the one exception was the attack on Pearl Harbor a year earlier), and red bomb bursts mark battle locations, including Midway, the Coral Sea, and the Solomon Islands. Behind this defensive line, red ship silhouettes highlight the critical trans-Pacific supply lines between San Francisco, Sydney, Australia, and Auckland, New Zealand.

The Situation in the Atlantic

The Battle of the Atlantic bore little resemblance to the difficulties the U.S. faced in the Pacific because of the threat posed by Nazi submarines, or U-boats (short for Unterseeboot). In the Atlantic, the U.S. and Britain sent supplies by convoy, which were groups of cargo ships protected by Navy escorts. Nazi submarines wreaked havoc on these shipping convoys. U-boat attacks sent millions of tons of supplies to the bottom of the ocean and cost thousands of lives during 1942 and 1943. Here, three 'convoys' of red ship silhouettes highlight convoy routes north from New York to Britain and Murmansk in Russia, straight across the Atlantic to support the fighting in North Africa, and south to ports in West Africa or further south around the Cape of Good Hope to ports in the Middle East. Short comments mark areas where the highest number of attacks happen and where 'wolf packs' of German submarines hunted for convoys.

This map is an enlargement of a map created by Robert M. Chapin, Jr. and originally published in the December 7, 1942 edition of TIME Magazine. Two examples are cataloged in OCLC and are part of the institutional collections at Franklin and Marshall College and Pennsylvania State University.