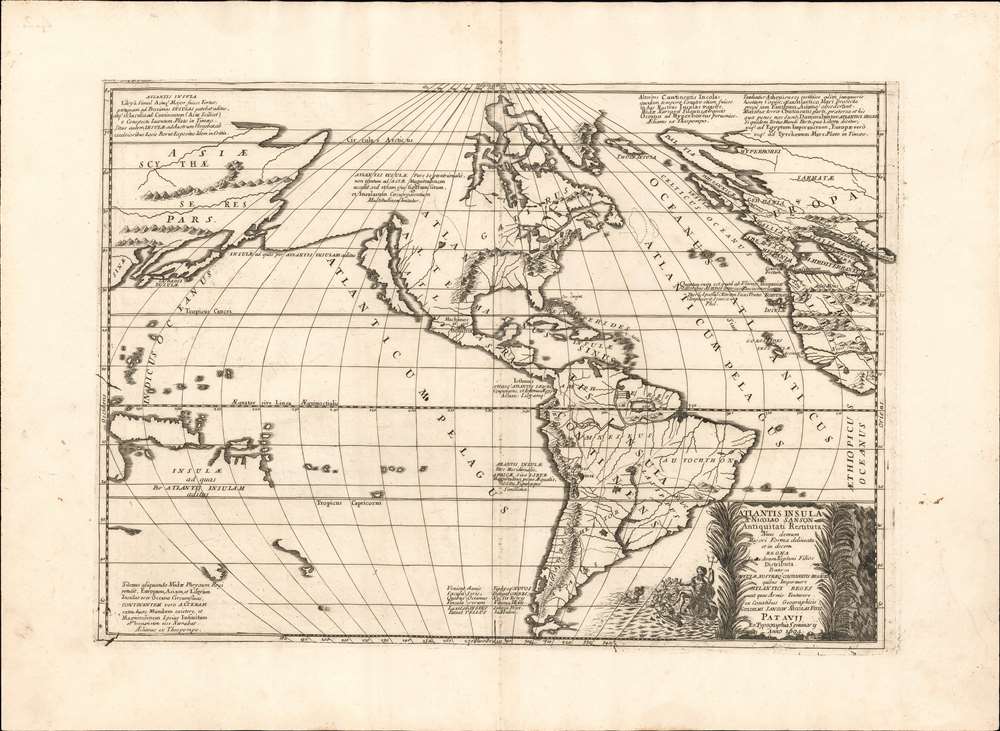 This is a beautiful example of Nicolas and Guillaume Sanson's map of America as the lost continent of Atlantis. The present examples is a scarce 1694 Italian edition, finely engraved and printed with strong inks on beautiful Italian paper - à la Coronelli. It is visually and physically superior to Sanson's own earlier editions.

The map employs state-of-the-art geographical knowledge for its template, the outline of the continents resembling that found on many contemporaneous maps. Tasman's mapping of Australia and the South Pacific and the speculative geography of the North Pacific are evident. North America's delineation (insular California, the partial Great Lakes, and pre-Hennepin mapping of the rivers emptying into the Gulf of Mexico) corresponds to Sanson's other maps, as well as Dutch maps of the mid-seventeenth century.

The map's toponymy diverges drastically from the norm, applying the name 'Atlantis Insula' to North and South America, and dividing the land into ten domains named after the mythical sons of Neptune, legendary king of Atlantis. Atlantis' only cities are Machimos ('Fighting Town') and Eusebes ('Pious Town') placed roughly corresponding to Mexico City and Cusco respectively. These place-names derive not from Plato, but from the Greek scholar Theopompus' Philippica, a scathing parody of Plato's Timaeus and Critias. Text throughout cites both Plato's original work and Theopompus' parody to support the reality of Atlantis. Even ancient prophecy is offered in evidence: the poet Seneca's prophetic verse in Medea is quoted at the bottom center:

In late years a time shall come in which the ocean shall relax the bonds of things, and a great land shall be discovered. Tethys shall unveil new worlds, and Thule shall no longer be the utmost extremity of the Earth.

Perhaps in evidence of the truth of this pronouncement, Iceland has been prominently labeled 'Thule Insula.' Other notations propose analogous similarities between the old world and new, such as similarities in size and shape between 'the south part of Atlantis' and Africa; the likeness of the Isthmus of Panama to the connection between Asia and Africa; and in blatant denial of all visual evidence makes the spurious claim that 'the northern part of the island of Atlantis not only approaches the extent of Asia, but also imitates the shape, location and population of the surrounding islands.' Perhaps Sanson's choice of projection, distorting the coasts of Asia, Europe, and Africa in favor of 'Atlantis,' served to support these outrageous statements.

The map's engraving is superior to its scholarship, from the beautifully pictorial mountains to the striking cartouche. The latter is embellished with a depiction of Neptune seated on a seashell chariot, surrounding by sea-putti, perhaps intended to be nine of Neptune's ten sons. Two labor at pulling the chariot through the water.

The idea of the lost island of Atlantis was introduced in Plato's dialogues in the fourth century BCE as an allegory of the hubris of nations, and as an antagonist for his idealization of ancient Athens (Atlantis, able to dominate all nations in the world, was in Plato's pseudo-history repelled by Athens, as a demonstration of the latter state's superiority.) Plato's story ends with Atlantis having fallen out of favor with the gods, and sinking into the ocean.

It is difficult to find an allegory that someone, somewhere has not taken literally, so it is perhaps natural that Plato's tale would over the centuries be accepted as factual history by some. Plato's placed his fictional island in sufficiently vague a location (beyond the Pillars of Hercules, AKA the strait of Gibraltar) that did not help matters - nor did the fact that both the terms 'Atlantic' and 'Atlantis' share the same root. The Flemish humanist Justus Lipsius (1547 - 1606) argued for the reality of Atlantis, supposing that it may have been a now-sunken landmass in the Atlantic. Athanasius Kircher (1602 - 1680), in 1664, produced a map consonant with that notion. It is perhaps less surprising that the discovery of a new landmass across that ocean would result in speculation that the Americas might be the lost continent, than that no maps similar to this one were committed to print prior. Not even Ortelius produced a map depicting Atlantis - and he was fascinated with classical geography and produced maps tracing the journeys of Homeric characters. It may be that Sanson's map was in some respect an answer to Kircher's, or an embroidery upon it.

Sanson proposed much in this map that was astonishing and novel. His treatment of the North American west coast was, at the time this map was produced, generally accepted knowledge. Sanson - along with virtually every prominent geographer in Europe - firmly believed that California was the largest island in the world. The notion first appeared on a map in 1622, and through a combination of inertia and wishful thinking maps would continue reproducing the canard until well into the 18th century. In the case of this map, the insularity of California was assumed to the extent that no specific mention of it was made in the text.

This first state was engraved by Guillaume Sanson for inclusion in his father's Cartes Generales de Toutes les Parties du Monde, published by Pierre Mariette in 1669. Burden identifies four further states, printed as late as 1741.The present example is a scarce Italian edition issued in Padua by the Typographia Seminary (Seminário Episcopal Maior / Seminario Maggiore Vescovile)in 1694. We see no examples of this edition of the map in OCLC.