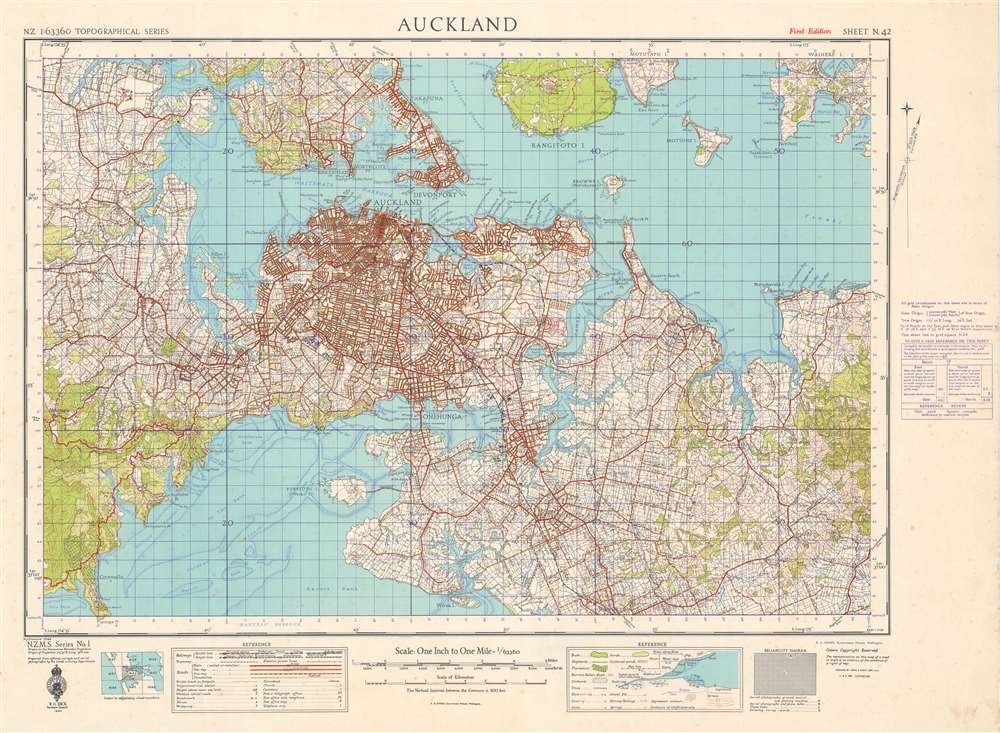 A topographical map and city plan of Auckland, New Zealand.
$300.00

A city plan superimposed on a topographical chart, this is a 1949 first edition New Zealand Department of Lands and Survey map of Auckland, New Zealand, and vicinity. The map depicts the region from Nihotupu to Clevedon and from Whenuapai Point to Manurewa. Information abounds, with districts, neighborhoods, suburbs, and towns all labeled, as are major roads, railroads, and parks. Coastal locations, such as points, and bays, as well as the mouths of streams and creeks, and channels between islands, are also identified. Several aerodromes are noted. A pair reference tables are present along the bottom border that detail all the different notations used here, including those to illustrate railways, tramways, and roads.

This map was created by A.J. Stewart and published by the New Zealand Department of Lands and Survey in 1949. We are aware of only one other example, which is part of the collection of the National Library of New Zealand.

The Department of Lands and Survey (1876 - 1987) was a department of the Government of New Zealand. Formed in 1876, the Department of Lands and Survey originally had a wide range of responsibilities, such as surveying, Crown lands, roads, health and tourist resorts, and immigration. In 1886, the department was made responsible for forests and agriculture as well. Over the ensuing century, many of the departments responsibilities were tasked to other departments. By the 1980s, this distribution of activities left Lands and Survey with the core responsibilities of surveying, mapping, land development, Crown lands, and lands and deeds. The entire department was restructured in 1987 and formed the Department of Survey and Land Information, which was tasked with providing civil, government, and military survey, mapping, and land information services. A state-owned company became responsible for land development and other new departments were tasked with conservation management. Further restructuring in July 1996 led to the creation of Land Information New Zealand, a department in charge of government land-related regulatory and purchase functions. A government-owned company, Terraling NZ Ltd, was given the former department's commercial activities. That company has since gone private and been renamed Terralink International. Learn More...